Home » Art No Longer on the Coattails of Fashion

Art No Longer on the Coattails of Fashion 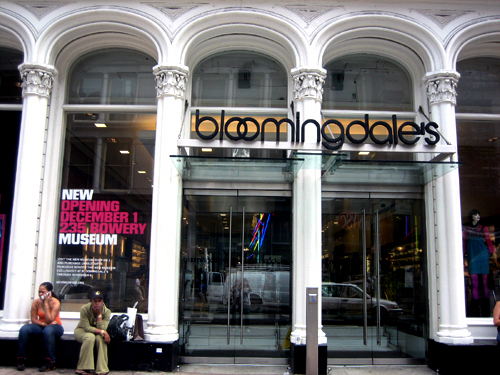 It seems to be the other way around instead, according to an article in the NYSun last week. Now that the art market has proven to be a hot arena, the fashion industry is doing all it can to include itself. Bloomindale’s latest campaign is called “Artrageous,” working in conjunction with the new New Museum opening in the Bowery this December.

The window displays in the Lexington Avenue store features artwork and design collaborations. For example, the Marc Jacobs display has a background of photography by Jean-Claude Wouters. In an interview with the Sun, Stephanie Solomon, the vice president and fashion director for Bloomingdale’s, said, “Wouters’ work has a real calmness. Marc Jacobs really has that in his sensibility, too.”

Solomon sees this art-based campaign as a way to bring in a new customer base to their stores. It may be most effective in New York City, with a flux of new galleries opening up in the Lower East Side and the still-growing Chelsea art scene.

Is art becoming too commercialized? The runway show for Levi’s collaboration with Damien Hirst and the Warhol Factory took place this past Saturday, September 8th. Hirst’s spin art designs were also made into larger paintings which decorated Gagosian Gallery where the fashion show took place.

The Takashi Murakami retrospective at the Los Angeles Museum of Contemporary Art is taking it a step further. The exhibit will also feature a fully-functional Louis Vuitton boutique that will sell limited edition purses, wallets and other accessories. The multi-colored and smiling cherry blossom Murakami collections for Louis Vuitton was a huge success which also spawned reproductions and countless fakes.

LA MOCA will receive no rental fee for the boutique’s placement in the center of the exhibition space, nor will it earn any fees from sales. Although the boutique has drawn much criticism, according to an article from Art Now Online, MOCA director Jeremy Strick said that the lack of distinction between fine art and “commercial practice” is a large element of Murakami’s work.

This entry was posted on Monday, September 10th, 2007 at 11:31 am and is filed under Art News. You can follow any responses to this entry through the RSS 2.0 feed. You can leave a response, or trackback from your own site.