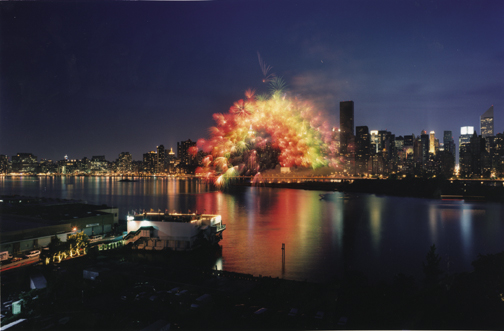 Chinese-born artist Cai Guo-Qiang will have his mid-career retrospective at the Solomon R. Guggenheim Museum in February 2008. The artist was chosen as a finalist for the museum’s Hugo Boss Prize in 1996. The exhibition will feature lesser known works by the artist, and will coincide with the Beijing Olympics in 2008 and will travel to the Guggenheim Museum Bilbao in 2009.

The working title of the exhibition is “I Want to Believe” and will feature a selection of 80+ works from the 1980’s to the present, chosen from major public and private collections around the world. The show will “illuminate Cai’s significant formal and conceptual contributions to contemporary international art practices and social activism.”

Cai’s work is aimed at alerting the audience “to a state of being, at once primoridial and futuristic, which feels awe, however fleeting, at the spectacle of pure life force”. He achieves this by creating scenes with mediums such as lights and gunpowder and community participation, even if the moment lasts a mere two seconds. 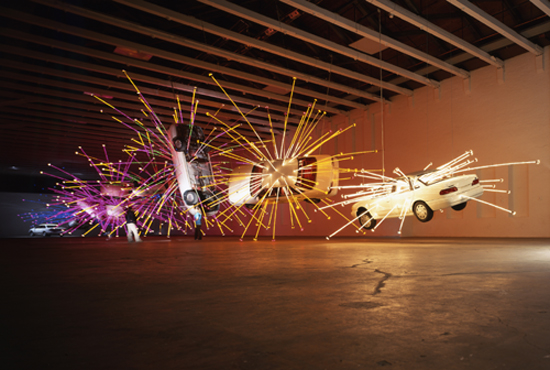 The retrospective will also include an installation with nine cars and “sequenced multi-channel light tubes” called “Inopportune: Stage One” (above) originally exhibited at MASS MoCA from December 12, 2004 – October 2005. “Inopportune” will be redesigned to fit into the famous Frank Lloyd Wright designed rotunda of the Museum (see scale model below). 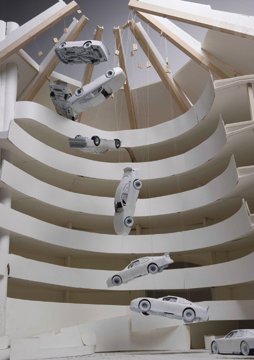 “I Want to Believe” will be the Guggenheim’s first solo exhibition of work by a Chinese-born artist. This exhibition is also integral to the Museum’s goals to “further integrate Asian art into its exhibition, collection, and education programs”.

This entry was posted on Monday, September 10th, 2007 at 11:40 am and is filed under Art News. You can follow any responses to this entry through the RSS 2.0 feed. You can leave a response, or trackback from your own site.