Go See: J.M.W. Turner at the Metropolitan Museum of Art through September 1st 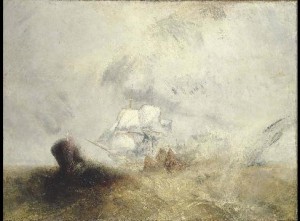 Whalers by Turner via Bloomberg.

From July 1st, through September 21, The Metropolitan Museum of Art is hosting the first retrospective exhibition of J.M.W. Turner. The exhibition will contain 140 diverse paintings. Most works come from Tate Britain which is the most comprehensive collection of the artist’s work in the world. Turner’s paintings represent seascapes, historical subjects, and modern scenes usually with a characteristic use of light. 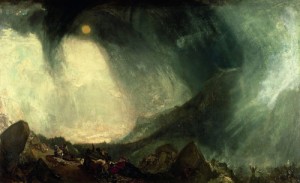 Hannibal and his army crossing the Alps via the MET

Some of his most famous paintings will be exhibited at the show, such as Fishermen at Sea (1796, Tate), to the luminous The Burning of the House of Lords and Commons (1835, Philadelphia Museum of Art), Hannibal and his Army Crossing the Alps (1812, Tate). The Turner exhibition is reflective of the Impressionists and Symbolist periods of painting, and the artist is said to have been heavily influenced by Claude and Poussin. The exhibition will be organized both thematically and chronologically, beginning with his landscapes and following with his late seascapes and light-filled canvases. 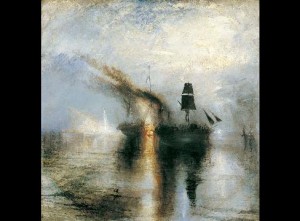 Burial and Sea by Turner via Bloomberg.

One of the first works on view is “Fishermen at Sea” (1796), a dark, moonlit scene in blue and black and sea greens. The picture is the first oil Turner exhibited at the Royal Academy.

Born in London in 1775, Turner spent his childhood in Covent Garden, where his father owned a barber shop. At a very young age, Turner showed his talent, and at fourteen years old, he entered at the London’s Royal Academy of Arts Schools, becoming then the youngest artist to be elected as a full Academician. 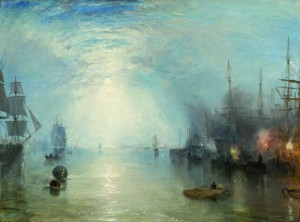 JMW Turner via the MET

This entry was posted on Friday, July 4th, 2008 at 3:27 pm and is filed under Go See. You can follow any responses to this entry through the RSS 2.0 feed. You can leave a response, or trackback from your own site.