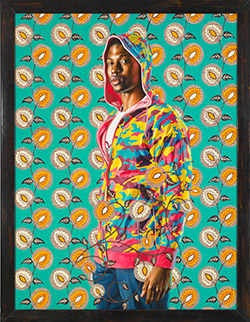 Kehinde Wiley is back at the Studio Museum Harlem, where he began his career as an artist-in-residence immediately after earning his MFA from Yale. This time, he is in the Studio Museum in the form of a solo show of his latest work “The World Stage: Africa, Lagos ~ Dakar.”  Wiley is known for his portraiture of urban young African-American men painted in 18th and 19th-century style.  In his “World Stage” series, Wiley is focusing on the urban black man in other countries, studying their history, culture and art. The ten paintings on display in the Studio Museum until October 26, 2008, are from his latest trip to Lagos, Nigeria and Dakar, Senegal. 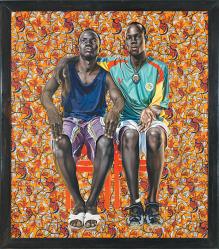 In his travels, Kehinde Wiley says he “started to notice that the way that many people in other parts of the world interact with American culture is through black American expression.” As with most of his work, Wiley approached strangers on the street to model for his paintings. This method provides Wiley the opportunity to depict the men as they are, in the clothes they wear, while posing them and adding details that talk about their country’s traditional culture. 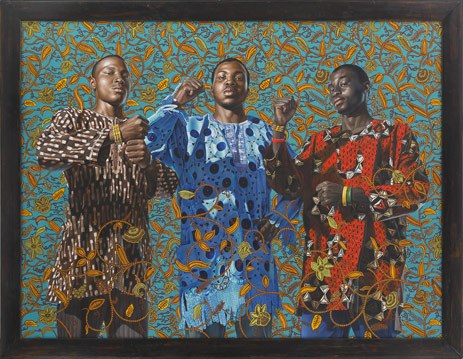 In Lagos and Dakar, the poses reflect public post-colonial sculptures and traditional textile patterns. These rich patterns and stoic poses juxtaposed with sneakers and jerseys account for a tension in the paintings, analogous to the tension any person experiences while simultaneously trying to express himself and observe tradition. 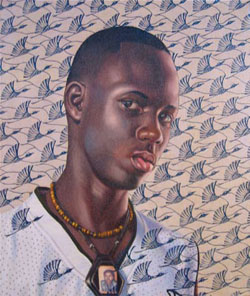 Wiley did see a difference between his American models and those from Africa. The American models were not surprised – perhaps due to their celebrity culture – while the African models appeared “trapped, manipulated, almost used, it feels as if they are trying to please the artist in some way.” His experiences with people around the world will continue to explore new correlations between people and their cultures and the American culture. With future shows set for the The Brooklyn Museum, Kehinde Wiley envisions his travels and resulting paintings becoming a modern “Family of Man.” 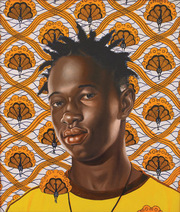 This entry was posted on Friday, July 25th, 2008 at 2:45 pm and is filed under Go See. You can follow any responses to this entry through the RSS 2.0 feed. You can leave a response, or trackback from your own site.