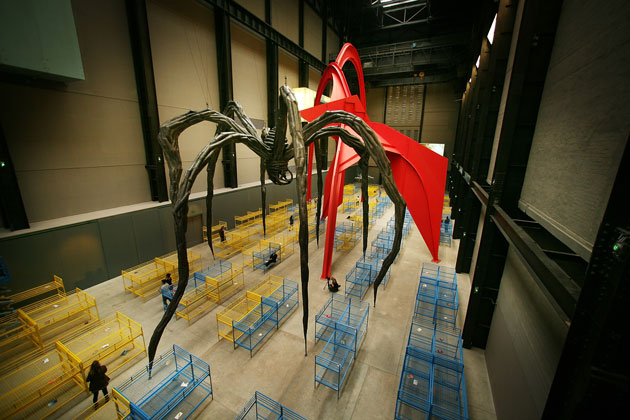 Dominique Gonzalez-Foerster’s installation TH.2058 at Tate Modern in London via The Independent.

The Tate Modern, London is currently displaying its ninth Turbine Hall installation by French artist Dominique Gonzalez-Foerster. The installation is inspired by the artist’s vision of an apocalyptic London 50 years into the future. The work aptly named TH.2058 imagines the city under siege by flooding, bombing, and invasion, its residents forced to take shelter in the Tate’s Turbine Hall in order to escape the never-ending rain. Gonzalez-Foerester has filled the hall with rows of of bunk beds scattered with science-fiction novels such as George Orwell’s 1984 and Jack Finney’s Invasion of the Body Snatchers. A literal homage to the writings that helped inspire the work. The beds are pinned beneath giant replicas of sculptures previously housed in the Tate, including a gigantic duplicate of a spider by Louise Bourgeois and a colossal copy of Alexander Calder’s pink flamingo. A screen hangs over the end of the space and displays what Gonzalez-Foerester calls The Last Film; a montage of science fiction clips from Planet of the Apes, The Man Who Fell to Earth, and Solaris among others. All of this coupled with the constant sound of rain. The piece was inspired not only by science-fiction works but also by the 2005 London subway bombings that killed 52 and the 1940-41 bombings of Britain by the Nazi’s. 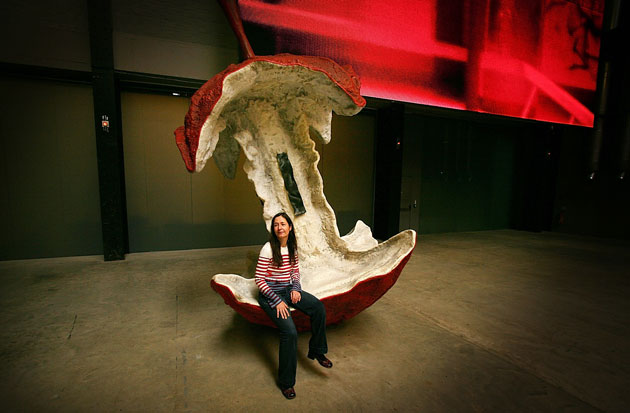 Gonzalez-Foerster taking a seat in her over-sized version of Claes Oldenburg’s apple core via The Indepedent. The artist whose work has rarely been seen in the UK created TH.2058 as her first British commission. Though the artist was included in the Tate’s World as a Stage exhibition last year where she showcased a 1998 work entitled Séance de Shadow. The work which allowed visitors to cast human shadows on the walls and become actors in real-time demonstrated Gonzalez-Foester’s committment to include the viewer in her creation. TH.2058 does so similarily with its invitation to lay down on a bed, pick up a book, and listen to the sound of the rain. 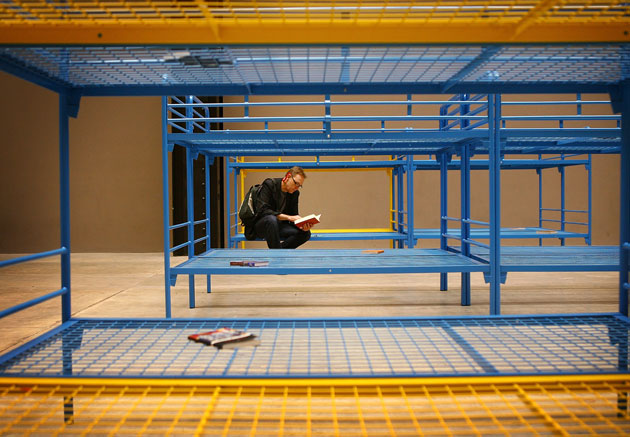 A visitor reads one of the many science-fiction books dotting the beds that make up the bulk of Gonzalez-Foerster’s installation TH.2058 via The Independent. 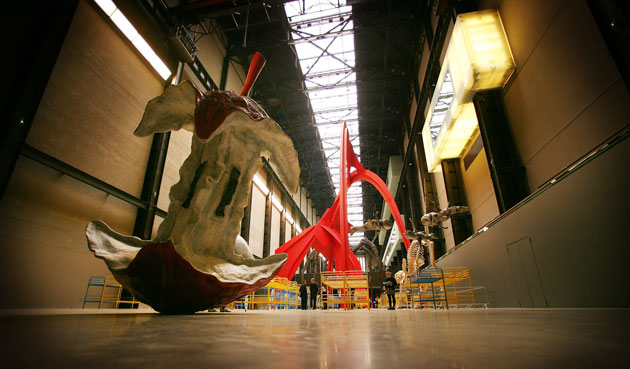 TH.2058 by Dominique Gonzalez-Foerster at Tate Modern via The Independent.

This entry was posted on Monday, October 20th, 2008 at 1:48 pm and is filed under Go See. You can follow any responses to this entry through the RSS 2.0 feed. You can leave a response, or trackback from your own site.