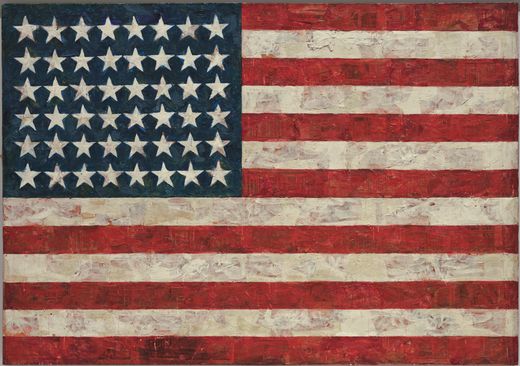 The Museum of Modern Art now has on view a survey of the work of Jasper Johns. The exhibition presents a focus on Johns’ reworking and repetition of ideas and motifs, and celebrates the Museum’s recent acquisition of thirteen new works on paper done by Johns in 2001. These untitled works are based around Johns’ ‘Catenary’ theme, so named for the curve of a string between two points, a figure prominent in most of the works. Johns received leftover, rejected prints from the printshop of two aquatints, ‘Untitled (Positive)’ and ‘Untitled (Negative).’ He used those prints to rework the images, collaging, painting, and drawing over the prints. 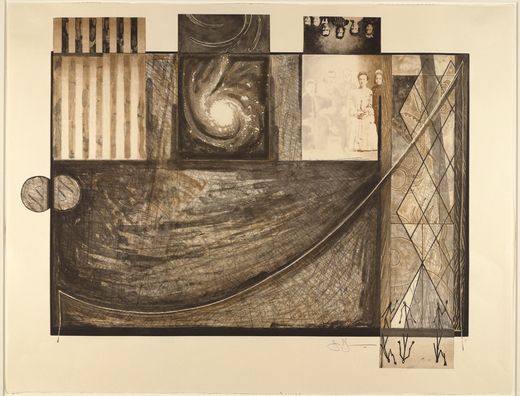 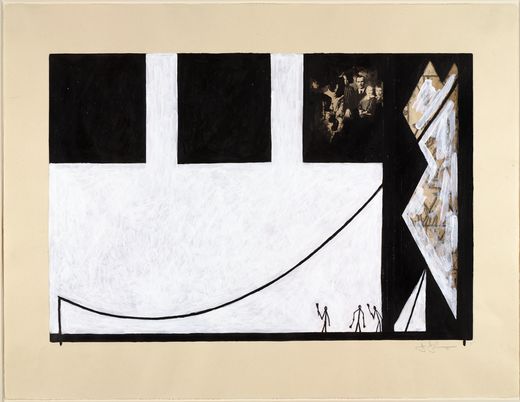 Although Johns is well known for his painting and drawing, his printmaking has played a valuable part in his investigatory process. He has said, ‘Just the process of printmaking allows yo to do things that make our mind work in a different way.’ The focus of the exhibition is on this particular medium, and its role in Johns’ creative approach. 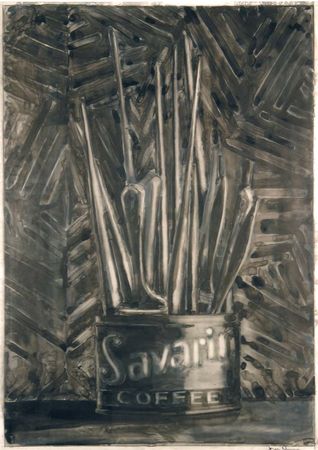 The Museum has drawn from its large collection of Johns’ work, including many works that use the artist’s famous iconography of the American flag, numbers, and a Savarin coffee can holding paintbrushes. These images repeat throughout his work in many different ways and through the expanse of his career. Johns, born in 1930, is considered part of the Neo-Dadaist movement of the 50s and and 60s. One of his lasting marks was to use appropriated iconography in order to render the subject null, thereby drawing attention to the surface of the work. Using repetition of images reworked in many different ways voided them of symbolism and context. 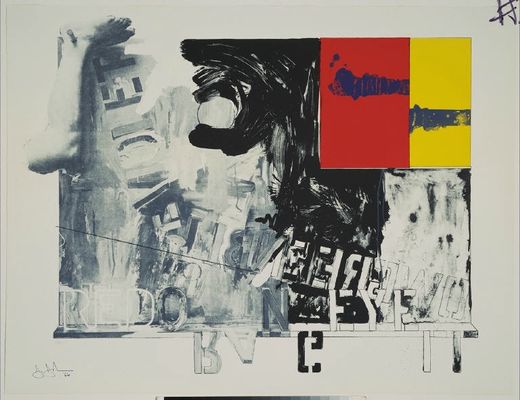 Jasper Johns’ ‘Passage I’ via MoMA 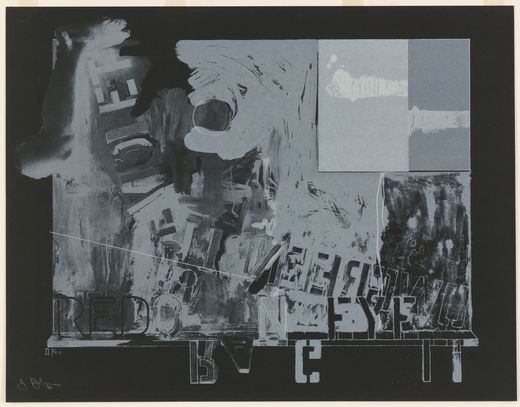 WHEN IT COMES TO listing the strategic areas of Dime Savings Bank, mailroom operation is not on chief information officer Jack Wagner’s list.

So, in an effort to streamline operations, cut costs, and keep the bank dedicated to the business of banking, Dime turned over its mailroom operations to an outsourcer.

“Running the mailroom is like processing payroll,” said Mr. Wagner. “It is important and has to be done, but it is not a strategic focus.

By outsourcing the mailroom operations, Mr. Wagner has more time to spend on areas of strategic focus, like the bank teller network and mortgage origination systems.

Mr. Wagner said the bank has already used outsourcing successfully in its lockbox and check processing departments and thought the mailroom was a logical next step.

“We wanted a firm to come in, hire a staff, and run the operations in our facilities,” he said. “I don’t consider the operation direct outsourcing; it is more facility management.” Bank executives realized that having an outside firm manage the mailroom operation would reduce the administrative burden.

“By having an outside contractor, we would be able to eliminate the time spent on administration and concentrate on the core aspects of our informatioin resources,” Mr. Wagner said. “We are able to focus on the strategic activities of the bank.” The bank looked at three companies to handle the operation. After reviewing the proposals, it decided to go with Archer Management Services, New York.

Archer specializes in support service areas such as record management, mailroom operation, and couriers. According to president Stanley Katz, Archer’s job is to reengineer the whole operation. go to site dime savings bank

“We bring in time and motion people to see how to get the most out of the department and figure out a new way to provide the service faster and more efficiently,” Mr. Katz said. “Because this is our business, we are able to use the most up-to-date information and technology to get the mail in and out efficiently,” he continued.

Mr. Katz says that by conducting internal surveys, Archer has been able to find out exactly what mailroom services are needed and what measures can be used to cut down on costs.

“We have added a courier-control software program to insure that vendors meet their deadlines,” he said. “If a vendor does not deliver the package on time, the software will automatically alert the staff to request a credit.

“We have also started using pouch mail to various zones to cut down on costs,” he continued. “If two packages need to be sent to the same location, instead of paying for delivery twice we can put the package in a pouch and pay one fee for delivery.” According to Mr. Wagner, the bank felt that by going with an outsourcer it would be able to gain greater control over the operation.

“Because Archer provides the mechanisms and a much more structured environment, we have more control with what is going on,” he said.

“Bill is responsible for providing a response and a recommendation to eliminate the problem and make sure it does not happen in the future,” he said.

According to Mr. Wagner, the bank has a three-year contract with Archer. There is no guarantee that it will be renewed.

“There is no automatic renewal and if the service is not upt to our expectations, we will go with another service or bring it back in-house,” he said.

However, Archer provided Dime with a guarantee to improve service of the operation.

“The company has been able to get us the mail quicker and improve the overall service,” Mr. Wagner said.

He added that Archer’s ability to provide uninterrupted service was an important factor in choosing the company.

“Archer is able to provide us with uninterrupted service because they handle all of the employees directly,” he said. “If an employee is out sick or has an unplanned absence, Archer is able to use its pool of staffers to find a replacement and insure coverage. When we were running the operation ourselves we would not be able to find a replacement and the operation was understaffed.” Although Dime did let mailroom employees go, Archer strongly encouraged them to join the Archer team. According to Scott Rachman, an Archer regional manager, the staff at Dime was given the opportunity to interview with Archer for positions within the organization. web site dime savings bank

“More than 80% of the employees were given jobs either at Dime or at other AMS locations,” said Mr. Rachman. “Because of downsizing within the organization and severance packages, some employees did not continue on.” “Many of the mailroom employees went from being paid by the Dime on Friday to being paid by Archer on Monday,” said Mr. Wagner. “It was a very smooth transition.” Although the service has been in place only since July of this year, the bank has seen an increase in productivity and a decrease in the overall cost of services.

“Because Archer has taken over the management of the mailrooms, we have been able to use the services in more cost-effective manner,” said Mr. Wagner. “Archer provides us with monthly reports, which detail how the services are being used and where we aere saving money per product.

“Archer is able to give the staff specific training on how to use the services in the most cost-efficient manner,” he added “By knowing the difference between the various products, the bank is able to save money.” According to Stanley Fenvessy, of Fenvessy Consulting, New York, outsourcing is one of the top dozen strategies that a company can use to improve operations and compete in today’s global environment.

“Using an outsourcer provides an experienced manager that will provide the organization with systems and controls that it would not have if it was managed internally,” he said. “An inside manager cannot give the mailroom professional management that an outsourcer can provide.” Mr. Wagner said that the bank is now considering outsourcing its copy machine maintenance and operation.

“If we can find other non-strategic focused applications, we would be willing to look toward outsourcing to get them done,” he said.

This entry was posted on Monday, January 5th, 2009 at 6:17 pm and is filed under Go See. You can follow any responses to this entry through the RSS 2.0 feed. You can leave a response, or trackback from your own site.