Go See: Joseph Beuys’s Early Works on Paper from the Collection of Helga and Walter Lauffs at Hauser & Wirth, London through February 28th, 2009 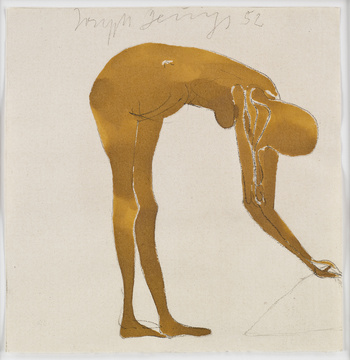 Joseph Beuys’s early works on paper from the collection of Helga and Walter Lauffs are currently on display at Hauser & Wirth in London. The works date from the 1950s, a period of crisis and introspection yet necessary for Beuys’s growth as an artist he later said.  Beuys produced the drawings in solitude drawing continuously in order to create a new language for art with both human and spiritual qualities.  Made with various mediums, the drawings are at once delicate and strong.  The works explore a new form of organic depiction that would serve as a basis for future sculptural creations. 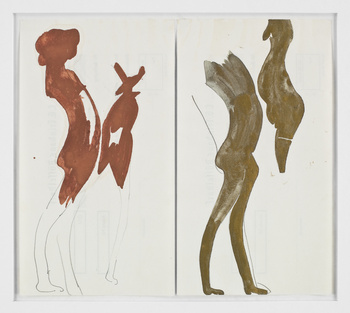 The motifs in Beuys’s depict mostly female figures along with landscapes and animals.  The works appear to touch upon subjects most likely linked with folklore, mythology, and Christian iconography.  Women are often given a prominent status in the artist’s work; he likens them to heroes and powerful earthly fertility goddesses. For example, in Two Double Nudes the soft outline forms of two female nudes are partly colored in brown and gold paint seemingly to depict their inner physical energy.  The landscape Limestone Mountains, portrays the visceral qualities of the earth. Beuys said that he strived to work  through what he called an “evolutionary process.” “That is why the nature of my [artworks] is not fixed and finished. Processes continue in most of them: chemical reactions, fermentations, color changes, decay, drying up.  Everything is in a state of change,” said Joseph Beuys. 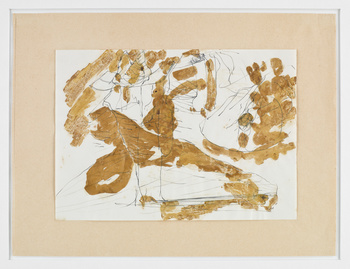 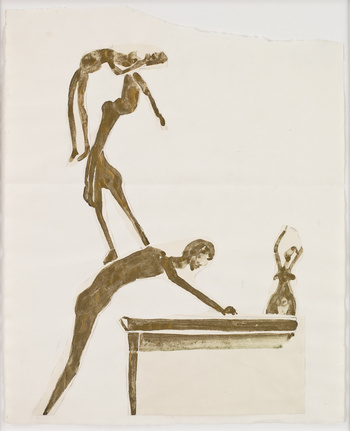 Artistes (Cascade) (circa 1954) by Joseph Beuys, via The Saatchi Gallery 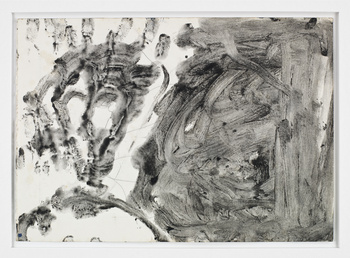 This entry was posted on Wednesday, February 11th, 2009 at 6:15 pm and is filed under Go See. You can follow any responses to this entry through the RSS 2.0 feed. You can leave a response, or trackback from your own site.

One Response to “Go See: Joseph Beuys’s Early Works on Paper from the Collection of Helga and Walter Lauffs at Hauser & Wirth, London through February 28th, 2009”