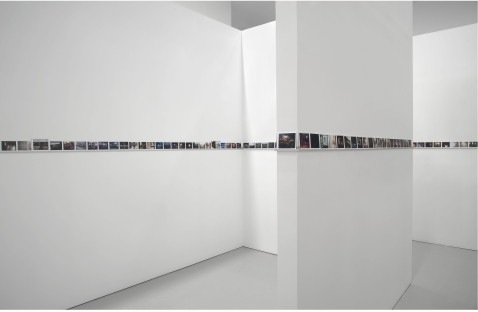 David Zwirner Gallery presents its first solo show of New York-based Philip-Lorca diCorcia’s contemporary photography.  1,000 Polaroids, shot by DiCorcia over a span of 25 years, represent his cinematic approach to photography.  Though the works are, upon first view, improvised snapshots, they are not candid at all, but balanced between documentary and staged photography, fact and fiction.

In late 2007, steidldangin published Thousand, a book containing actual-size reproductions of diCorcia’s Polaroids, edited down from a collection of 4,000.  This exhibition was then shown in early 2008 at the Los Angeles County Museum of Art. At David Zwirner,  the Polaroids are displayed at eye-level on a long thin aluminum railing attached to the gallery’s main walls, continuing
into additional interior, spiral-like spaces built for this installation.

In one oft-repeated anecdote about DiCorcia’s meticulous shooting style, he arranged strategically placed flashes inside a refrigerator, darkened the room, and directed his brother to open the appliance door over and over again until he obtained the perfect image.  The result, of course, is “Mario,” one of DiCorcia’s most iconic images, and one that encapsulates the seemingly improvised quality of his work.  By evoking a sense of the ephemeral, viewers project their own narratives onto DiCorcia’s pictures, creating a bond rarely felt with other contemporary photography.  His photographs are “ordinary,” yet they manage to abduct the viewer’s imagination with their stage craft. 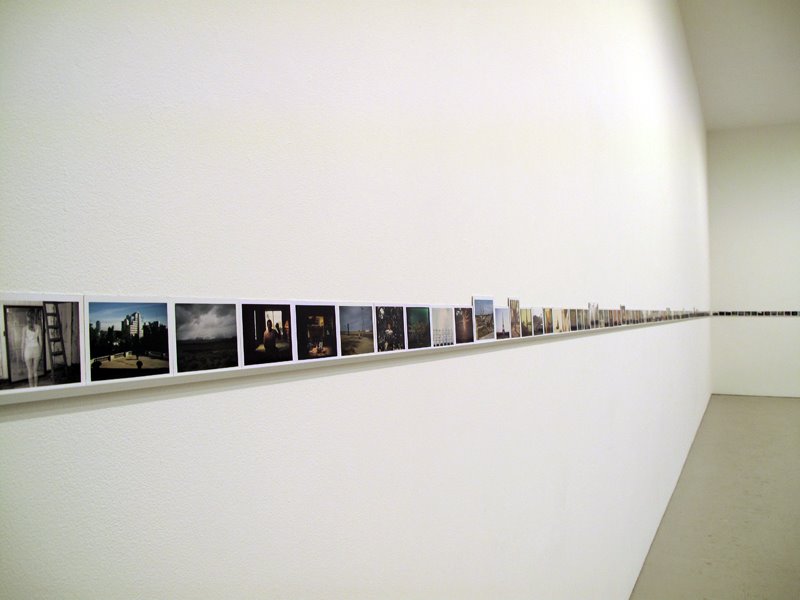 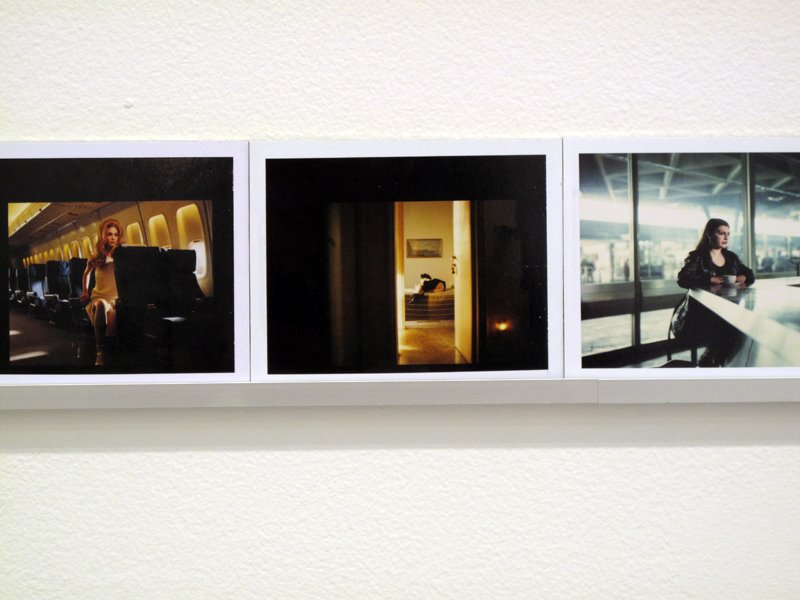 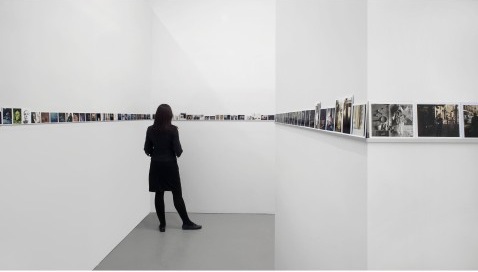 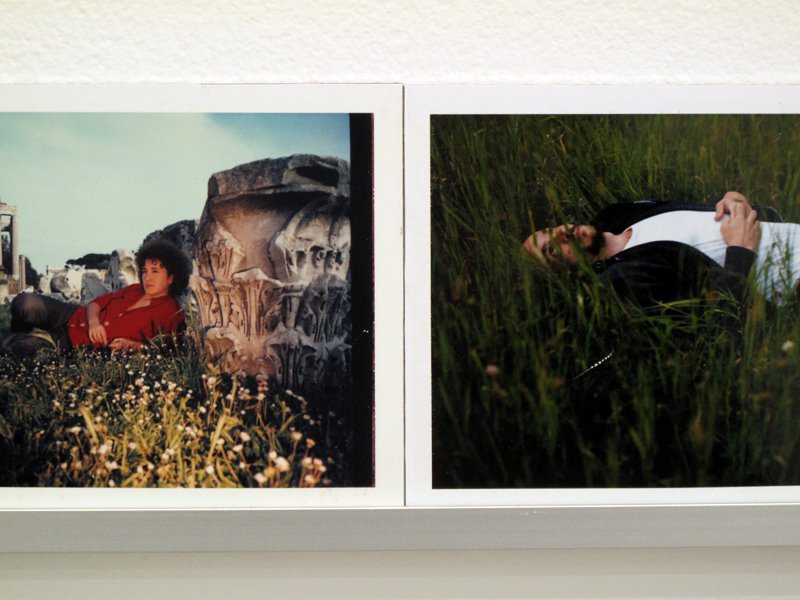 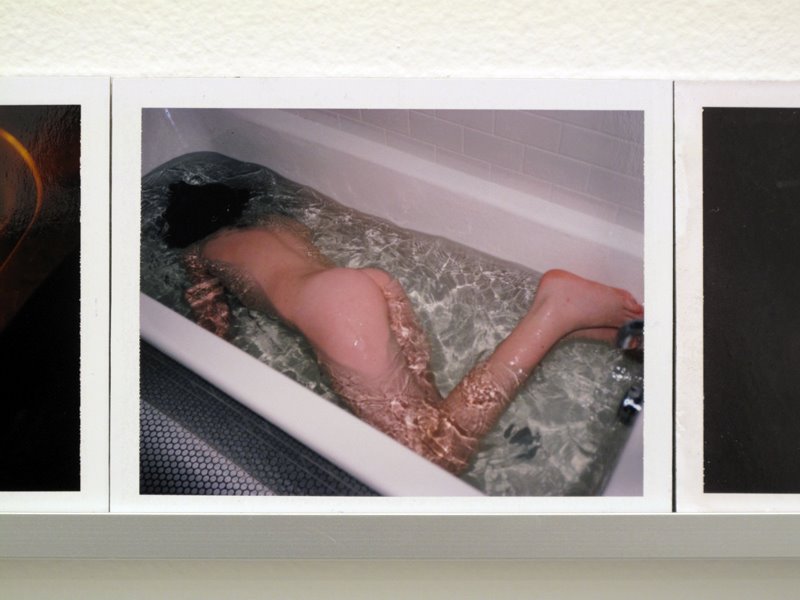 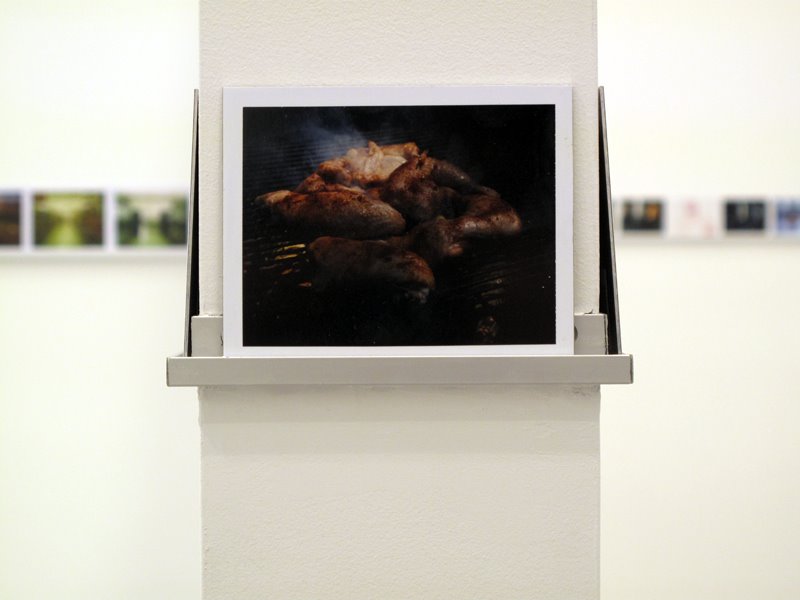 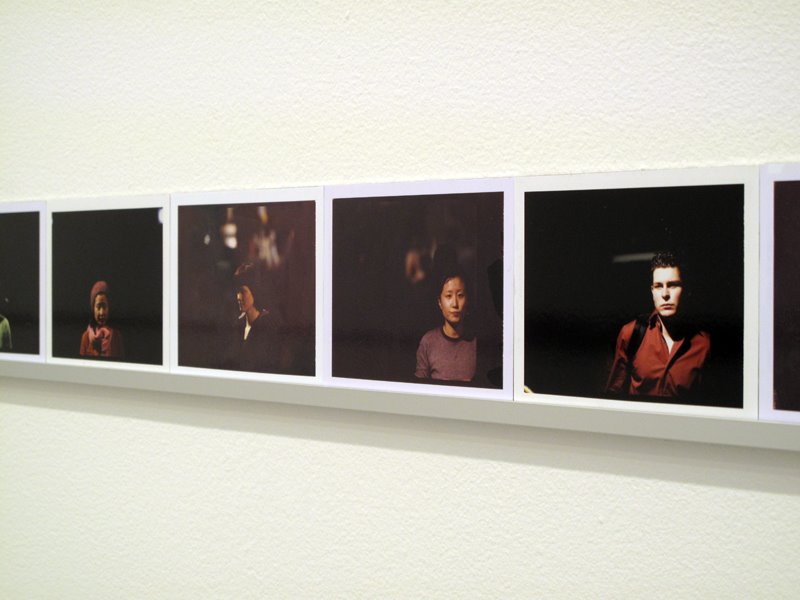 Encyclopedia of the Great Depression January 1, 2004 NATIONAL LABOR RELATIONS ACT OF 1935 (WAGNER ACT) Franklin Roosevelt signed the National Labor Relations Act (NLRA) into law on July 5, 1935. Also known as the Wagner Act after its chief sponsor, Senator Robert F. Wagner, a New York Democrat, the law marked a major milestone in the history of the American trade union movement. The NLRA went beyond earlier legislative declarations in the Railway Labor and Norris-LaGuardia acts to demonstrate that U.S. public policy favored workers joining unions and engaging in collective bargaining by providing government protection of the right to organize. Although many historians credit the NLRA with contributing significantly to the quadrupling in union membership that occurred in the twenty years following the law’s adoption, some critics see the labor law regime established by the NLRA as ultimately constricting the development of the labor movement and creating the context for the steady decline of trade unions that occurred after the mid-1950s.

Wagner first introduced a Labor Disputes bill in the Senate in March 1934. His proposal was in reaction to the labor turmoil that had followed in the wake of the adoption of section 7(a) of the National Industrial Recovery Act. Section 7(a) asserted the right of employees “to organize and bargain collectively through representatives of their own choosing.” The precise meaning of that right, however, soon became a matter of controversy and led to President Roosevelt’s appointment of a National Labor Board, headed by Wagner, to interpret the law and mediate disputes. The National Labor Board’s lack of clear authority and frequent disagreements with the leadership of the National Recovery Administration led Wagner to propose a separate bill to establish a more effective labor board and to clarify the protections to be provided to workers attempting to organize. Rather than supporting Wagner’s proposed legislation, Roosevelt in 1934 favored the adoption of a stopgap measure, Public Resolution No. 44, that allowed him to create a revamped labor tribunal, the National Labor Relations Board (NLRB), but which continued to lack effective enforcement powers.

Continuing frustration with the implementation of section 7(a) led Wagner to introduce a revised version of his Labor Disputes bill in the Senate in February 1935. Wagner drafted the new NLRA with the assistance of his legislative aide, Leon Keyserling, American Federation of Labor counsel Charlton Ogburn, and NLRB lawyers Calvert Magruder, Philip Levy, and P.G. Phillips. Representative William P. Connery, Jr., sponsored the bill in the House. In spite of strong support for the bill in both houses of Congress and from the leadership of organized labor, Roosevelt remained unenthusiastic about the legislation until the Supreme Court ruled the entire National Industrial Recovery Act unconstitutional in May 1935, thus creating a void in New Deal labor policy. nationallaborrelationsact.org national labor relations act

The NLRA as finally passed established an independent three-person National Labor Relations Board that, in contrast to its predecessors, could go directly to the courts to enforce its orders. The law banned certain specified “unfair labor practices” by employers that might interfere with or obstruct employees’ “right to self-organization.” Such unfair practices included employer-dominated or financed company unions. The NLRB was given authority to determine the appropriate bargaining unit and to conduct secret ballot elections to determine who, if anyone, the majority of workers in the unit wanted as exclusive bargaining agents. The specific language relating to the determination of bargaining units made possible the growth of industrial unions, but ruled out the development of industry-wide collective bargaining.

Most employers strongly opposed the NLRA and then actively resisted the law through legal suits challenging the law’s constitutionality. The law thus did not become fully effective until the Supreme Court in 1937 upheld its constitutionality in National Labor Relations Board v. Jones & Laughlin Steel Corp.

Some critics of the NLRA see the law as part of a corporate liberal strategy to defuse the radical potential of what had become a militant labor movement by channeling that movement into a narrowly constricted form of collective bargaining. Although organized labor strongly supported passage of the NLRA, several labor leaders in 1935 expressed concern about the long-term consequences of relying on the state to define and protect labor’s rights. The passage in 1947 of the Taft-Hartley amendments to the NLRA demonstrated the dangers of making unions subject to government regulation. Wagner, however, saw the law not as a means of controlling labor, but rather as a matter of justice, and he supported it because he believed strong unions would boost wages and thereby contribute to the growth of purchasing power needed for a healthy economy. Without the NLRA, it is hard to imagine either unions or workers making the gains they did after the law’s passage. go to web site national labor relations act

Gross, James A. The Making of the National Labor Relations Board, Vol. 1: A Study in Economics, Politics, and the Law. 1974.

This entry was posted on Thursday, March 19th, 2009 at 3:48 pm and is filed under Go See. You can follow any responses to this entry through the RSS 2.0 feed. You can leave a response, or trackback from your own site.