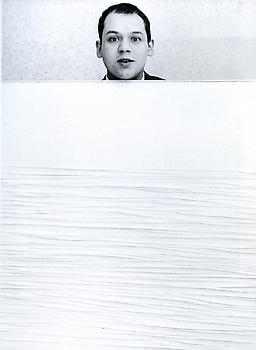 Piero Manzoni behind one of his ‘Achromes’ via Gagosian

Currently at Gagosian Gallery is the first major US retrospective of Italian Conceptual artist Piero Manzoni. Manzoni, who died of a heart attack at the age of 29 in 1963, is most notorious for his ‘Merda d’artista,’ 90 sealed cans purportedly containing his feces and sold for the market-value of gold at the time of purchase. The exhibition is curated by Germano Celant, who named the movement Manzoni belonged to, Arte Povera. 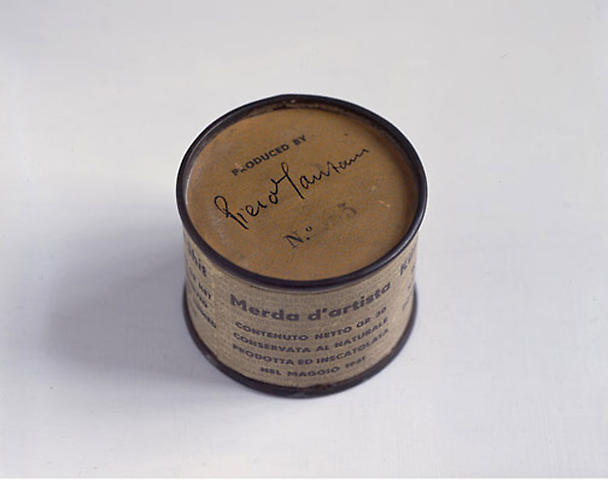 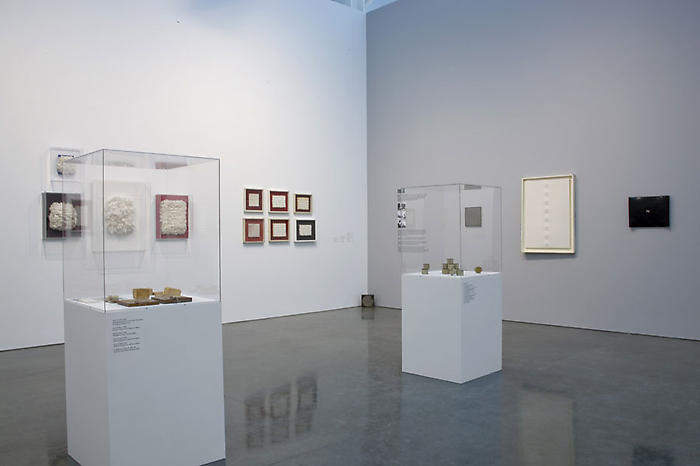 Installation view of the Piero Manzoni retrospective at Gagosian

The exhibition also includes works by Manzoni’s contemporaries, including Yves Klein, Lucio Fontana, Frank Stella, and other European and American artists. By including works by these artists, the retrospective aims to contextualize Manzoni’s work amongst the international art scene of the late fifties and early sixties, and to show how his response to those artists influenced his development towards a radical conceptualism that playfully but bitingly poked at the art world supporting him. 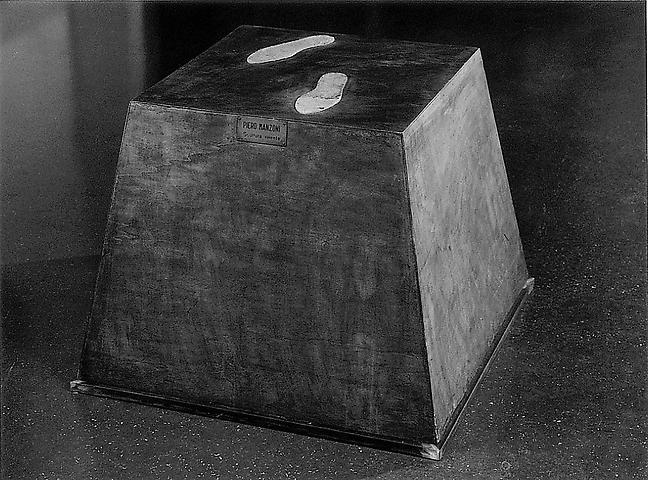 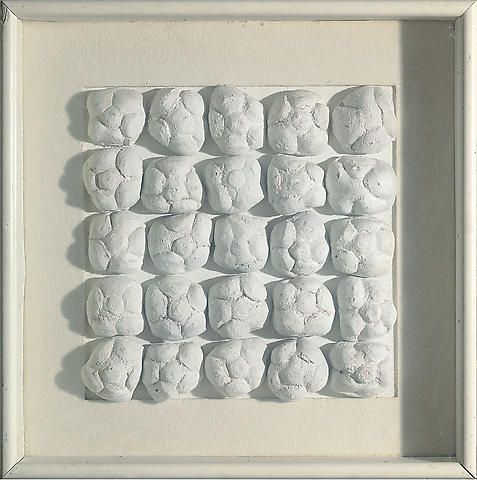 An ‘Achrome’ by Piero Manzoni via Gagosian

Given the artist’s brief career – his first major group show was in 1956, seven years before his death – the retrospective is a broad survey of almost every point in Manzoni’s oeuvre. Starting with a series of canvases stained with the imprint of everyday objects, made in oil or grease, Manzoni then moved on to his ‘Achromes,’ white canvases dipped in liquid clay, folded and pleated. Riffing on the monochromes produced by Klein, Robert Rauschenberg, and others at the time, paintings that claimed infinity in their seriousness, Manzoni’s ‘Achromes’ claim absurdity with their sagging forms. Later, Manzoni created other ‘Achromes’ from various materials such as cotton, fake fur, and even bread rolls. 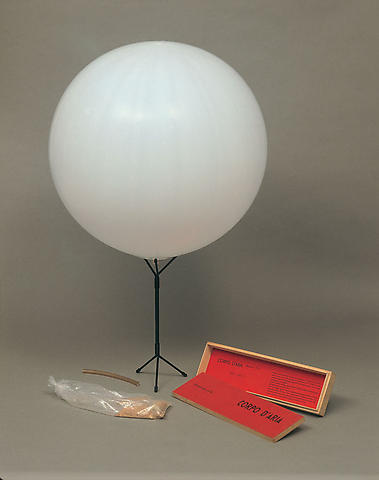 After this, Manzoni’s practice turns more and more to a response to the growing commercialization of the art world, as well as Italy’s own economic boom and capitalist transformation at the time. His 1959 work, ‘Corpo d’Aria’ (Bodies of Air), was an edition of rubber balloons to be inflated, though the artist’s breath was extra. With ‘Base Magica-Scultura Vivente’ (Magic Base-Living Sculpture), the viewer became the art by stepping atop a plinth. Manzoni would even sign people’s arms, thereby officially declaring them a work of art. In the ‘Linea’ series, Manzoni drew single lines of varying lengths, the longest measuring four and half miles, and placed them in sealed cylinders. 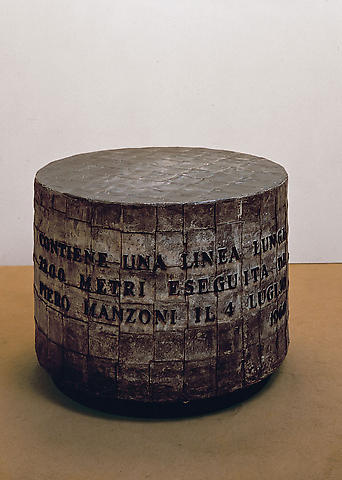 A highlight of the show is ‘Socle du Monde’ (Base of the World) a piece Manzoni created in 1962, placing an upside-down plinth on the ground in Hernings, Denmark, dedicated to Galileo, making the earth itself a work of art. The plinth has been relocated to Gagosian especially for the retrospective. ‘Manzoni: A Retrospective’ runs through March 21, 2009 at Gagosian Gallery in Chelsea. 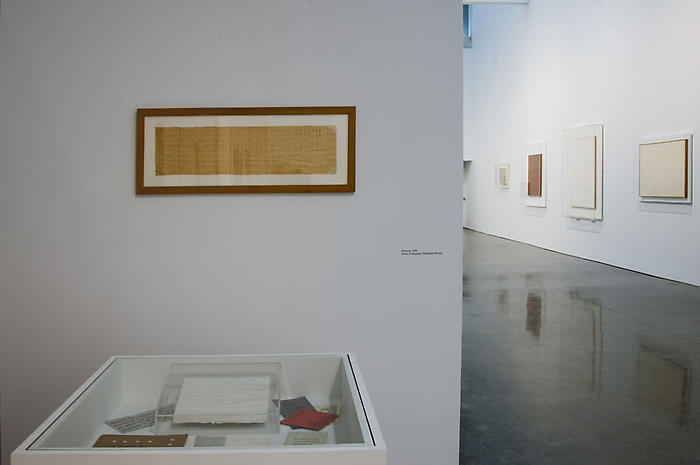 Installation view of the Piero Manzoni retrospective at Gagosian

Outdoor Power Equipment June 1, 2006 | Hudson, Mike Everyone makes mistakes but no one likes to admit they make stupid, costly mistakes. If a dealer bluntly proclaims to a customer …

* you ran your lawnmower engine without oil;

* you ran your string trimmer on raw gasoline;

* you filled your chain saw fuel tank with bar oil and put fuel mix in the oil tank;

* you ran your backpack blower without an air filter; or * you mounted that saw chain on backward … then the dealer should expect the customer to say, “NO, I DIDN’T DO THAT.” Use a little tact. Dealers should develop a consistent, positive approach to avoid confrontations with their warranty customers.

THE INTERVIEW Getting the warranty started off on the right foot begins when the customer first speaks to the servicing dealer counterperson. The counterperson should listen to the customer’s description of the problem, gather vital statistics, and start to ask timely questions that will help determine if it is warranty or not.

Customer: “The engine is hard to start.” Dealer: “Has it always been hard to start? Was it only recently hard to start? Has the fuel been in the tank since last season? Did you use a fuel stabilizer?” The first touchy subject that comes up during the interview is explaining to new warranty customers that not everything is covered by warranty. The best way to explain this is by using examples based on the equipment the customer is dropping off. If the customer brought in a lawnmower, the counterperson could point out that problems caused by stale fuel or water in the gas would not be covered. Normal service items like spark plug, air filter, and blade sharpening would also not be covered. Ask customers if they would like to have service items taken care of with the warranty repair.

New warranty customers may balk at the thought that their repair may not be covered under warranty. The experienced dealer counterperson likely already has a pretty good idea if it is warranty or not. The counterperson may want reassure the customer by explaining the shop will do everything it can to cover the repair under warranty. Write on the service order “check for warranty” or simply put a question mark after the word warranty. If the customer still doesn’t trust the dealer’s judgment, it’s better to find out before repairs are complete.

Before the customer leaves the store, check to make sure that the engine is not locked up, note any other obvious defects, and record any missing parts on the work order. You don’t want to have the customer claim the shop lost parts or caused the engine to seize.

THE WARRANTY CHECK I once worked across from a tech whose first four words often were, “IT IS NOT WARRANTY.” His goal during warranty repair checks was to find a quick excuse to deny claims. Sometimes he was right, but he often stopped short of finding the actual cause of the problem. Of course, this tech never talked to the customers. A dealership is likely to get customer complaints if a tech takes this kind of approach to warranty repair.

A more positive approach to warranty repair is for the tech to ask the question, “What did the customer do to cause the problem?” A worn starter rope would normally not be covered by warranty. If a tech discovers a misaligned choke lever was making the engine hard to start, both problems may be corrected under warranty.

THE WARRANTY REPAIR After the warranty is complete, test run the equipment. If it is practical load, test the unit. When customers are notified that the warranty repair is complete, remind them of the additional recommended service items noted by the tech.

IT’S NOT WARRANTY No matter what approach a shop takes toward OPE warranties, some claims will be denied. Give your customers a little time to justify their error and soften the description of the mistake. Examples include: “Did you lend it out?;” “The engine was run low on oil, causing it to lock up.;” “Did someone accidentally fill the trimmer with fuel from the lawnmower gas can?;” and “Did someone leave the fuel can out in the rain?” These examples are still stupid customer mistakes, but the dealer is much less likely to run into a confrontation. go to web site hp warranty check

HELP FOR PROBLEM CLAIMS The percentages of customer warranty complaints made to most OPE manufacturers are very small. On paper, manufacturer equipment warranties are black and white. The reality is dealers must deal with some customers’ claims in shades of gray. In other words, the dealer is expected to use some judgment. It’s not worth it to have an unhappy warranty customer throw a piece of equipment through the storefront window. Dealers should contact distributor or manufacturer warranty administrators for help when a problem becomes serious.

Taking a positive approach with warranty customers is the best way to avoid problems. Dealers may not expect to hear customers say, “I really am stupid.” But, if the customer is treated correctly, the dealer will be more likely to hear the following: “I did lend it to my neighbor,” or “My son forgot to check the oil,” or “I didn’t know the air filter had to be cleaned so often.” Mike Hudson is service manager for Eagle DistribUting Inc. in Gilbert. Ariz. Eagle distributes commercial lawn and garden equipment to eight western states. Its lines include Echo. Little Wonder/Mantis/Classen. Scag, BlueBird, Yazoo/Kees and Oregon. In April 2006, Hudson became the first back-to-back winner of the EETC’s john Thompson Memorial Service Manager of the Year award.

This entry was posted on Tuesday, March 17th, 2009 at 5:47 pm and is filed under Go See. You can follow any responses to this entry through the RSS 2.0 feed. You can leave a response, or trackback from your own site.