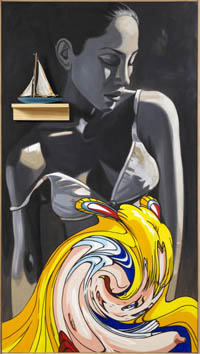 Sailor (2007) by David Salle, via The Kestnergescellschaft

Currently at the Kestnergescellschaft in Hannover, Germany is “Distance from Nowhere” highlighting the works of American artist David Salle. Since the 1980’s, Salle’s work has been associated with artistic movements such as “Neo-Expressionism” and “Transavantgardia.” His work often defies art historical classifications and is continually characterized by an independent style.Seventeen large-scale paintings dating from 2007 to 2009 are exhibited in Germany for the first time with the addition of six older paintings executed between 1983 and 1998. 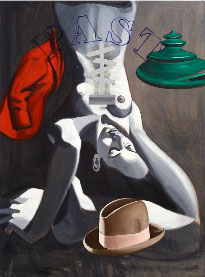 Ideas in Things (2008) by David Salle, via the Kestnergescellschaft

Salle’s compositions are rich with an abundance of coexisting and heterogeneous material. The artist often sites from art history referencing artists such as Robert Rauschenberg, Andy Warhol, and Frank Stella while superimposing motifs from cartoons and advertising. It has often been said that Salle’s painting announces the end of painting’s grand narratives and how such subjects can have numerous meanings and hidden truths. 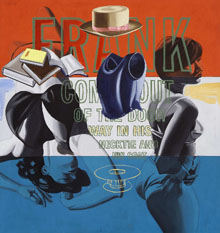 Frank comes out of the doorway (2007) by David Salle, via The Kestnergescellschaft

The artist’s new paintings exemplify pleasure in experimentation. Most of the works were created by overlapping image planes such as in the form of figure-ground compositions. His paintings show unidentified individuals that seem to be at once in the painting and outside of it. They are seemingly exposed yet ever present within Salle’s colorful and expressionistic creations. The painting’s surface has become almost like a theater where various and at times contradicting elements interact. 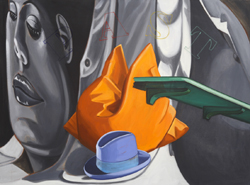 Hotel (2008) by David Salle, via The Kestnergescellschaft

David Salle (b.1952) began his education at California Institute of the Arts, Valencia, near Los Angeles, where Disney studios was established. There he studied visual art, film, theater, ballet, and music. 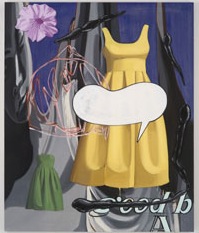 u
Goodbye A. (2008) by David Salle, via The Kestnergescellschaft

This entry was posted on Wednesday, May 20th, 2009 at 3:42 pm and is filed under Go See. You can follow any responses to this entry through the RSS 2.0 feed. You can leave a response, or trackback from your own site.