May 19th, 2022
REFERENCE LIBRARY
Home » Go See – Berlin: The Pietzch Art Collection on Display at the Neue Nationalgalerie through November 22, 2009.

Go See – Berlin: The Pietzch Art Collection on Display at the Neue Nationalgalerie through November 22, 2009. 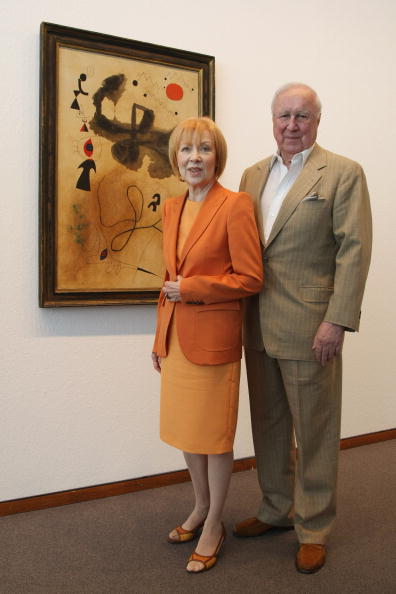 The German business couple Ulla and Heiner Pietzsch have lent significant pieces of Surrealist and early-American Abstract Expressionist art from their own collection for an exhibition entitled “Picture Dreams,” at Berlin’s new National Gallery. The ‘Pietzsch Collection,’ which ranks internationally as one of the most significant assortments of Surrealist and Abstract Expressionist art, was assembled over the course of 45 years to include more than 300 paintings, sculptures, and photos. 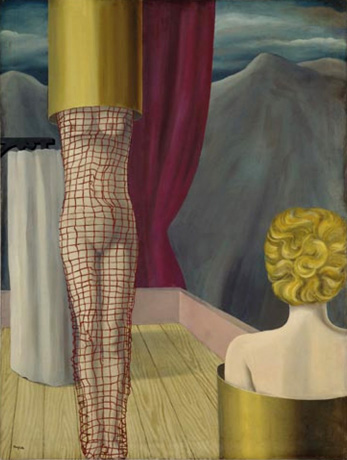 Magritte’s “Les Complices du Magicien,” 1926, is on display from Ulla and Heiner Pietzch’s collection. Via Artnet. 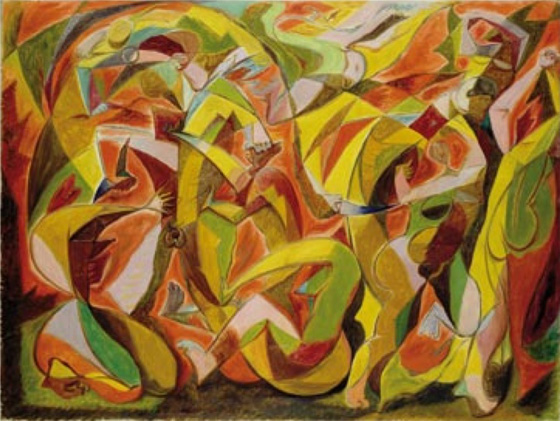 Another piece from the couple’s vast collection currently on show at the Neue National Galerie; “Massacre” by Andre Masson, 1931. Via Artnet.

One hundred and eighty items from the Pietzsch’s collection are on exhibit for “Picture Dreams,” including paintings and sculptures by André Breton, Salvador Dalí, Paul Delvaux, Max Ernst, René Magritte, Joan Miró, André Masson, and Yves Tanguy, among others.  Alongside the Surrealist works, and serving as an integral component of the show, are the American Abstract Expressionist works by Jackson Pollack, Mark Rothko and Barnett Newman, along with works by Mexican artists Diego Rivera and Frida Kahlo.   The exhibit is notable for showcasing artwork from two consecutive artistic movements, providing a historical framework of sorts through which the viewer can observe the influential roots of Surrealist art upon the later Abstract Expressionist movement. 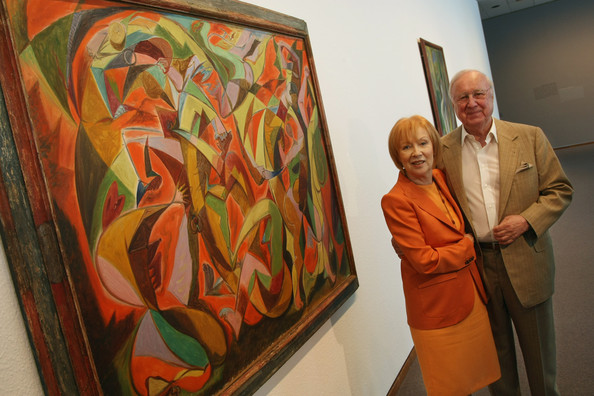 The couple posing in front of their painting ‘Massacre’ 1931, by Andre Masson, at the opening of “Picture Dreams.” Via Zimbio.

The Pietzsch couple began collecting art in the 1960s, when they started investing their profits from plastics and holding companies into various works, many of which are now worth millions. While Heiner Pietzsch was initially drawn towards Abstract Expressionism, Ulla preferred the work of the Surrealists. In 1972, the couple met German artist Max Ernst, a leader of the Surrealist and Dada movements, at Hanover’s Sprengal Museum. They found Ernst to be ‘a simply splendid chap whose posture, charisma and eyes one never forgot,’ and began collecting the artists work soon after. 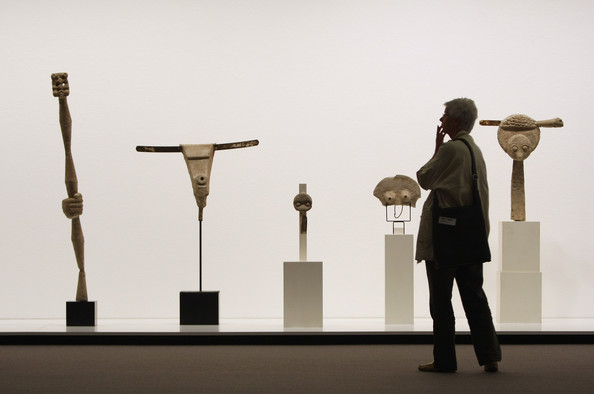 Sculptures by Max Ernst; a pioneer of the Surrealist and Dada movements, are part of the Pietzsch’s collection. 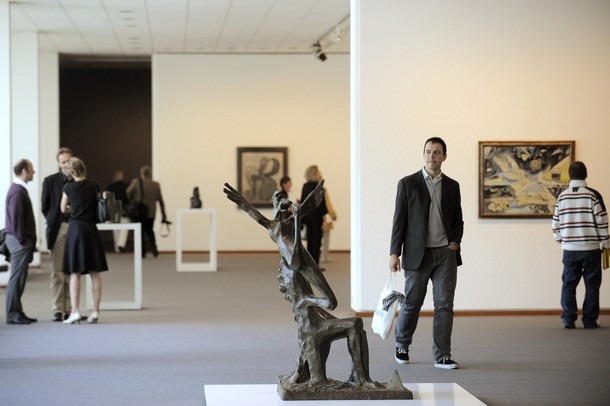 Inside “Picture Dreams;” an installation view of the exhibit at the Neue Nationalgalerie in Berlin. Via DayLife.

The couple, who built a spacious villa in Berlin’s Grunewald district to hold their collection, is now hoping to find a permanent home in the capital of Germany for their treasured works. Udo Kittelmann, the director of New National Gallery,  has already expressed interest; ‘We love the Pietzsch collection and the Berliners will also love it.’ 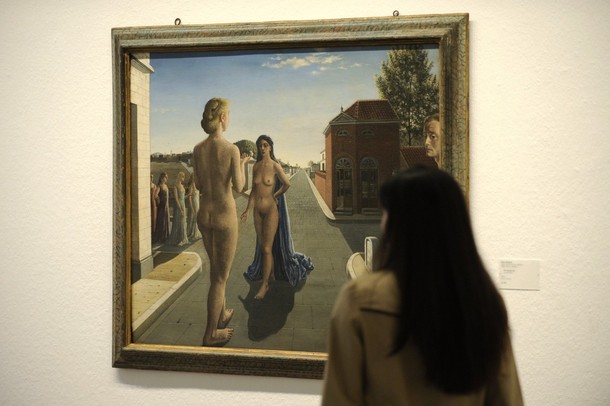 A visitor looks at  “The Encounter,” by Belgian painter Paul Delvaux. Part of the Pietzsch Collection, Via DayLife.

Also part of the collection; “Ladies Run, There is A Man in the Rose Garden,” 1948, by Leonora Carrington. Via ArtNet.

The ‘Pietzsch Collection’ has only been shown publicly twice before; once in Dresden, Germany and once at the Peggy Guggenheim Collection in Venice, Italy. ” “Picture Dreams” will be on exhibit at the Neue Nationalgalerie in Berlin through November 22nd, 2009.

Hindustan Times (New Delhi, India) August 4, 2009 London, Aug. 4 — After being regionally extinct for 28 years, the first baby rhinoceros has been born in Uganda and is being called Obama because his father is from Kenya while his mother was born in the US.

The calf was born at the end of June at the Ziwa Rhino Sanctuary.

“He’s a real little scamp, running all over the place like crazy, his mum can barely keep up with him,” the Telegraph quoted Angie Genade, director of the sanctuary, 105 miles north of the capital, Kampala, as saying. “Once we could get close enough to see what sex he was, there really was no other name that we could give him,” Genade added. web site disney animal kingdom

During the horrors of former President Idi Amin’s reign in the 1970s, Uganda’s rhino population of roughly 450 animals was completely wiped out. go to website disney animal kingdom

However, within the last four years, the 30 sq mile Ziwa sanctuary has taken four Southern White rhinos from neighbouring Kenya – “including the newborn Obama’s father, Taleo, the group’s dominant male.

They have also been given two rhinos from the Disney Animal Kingdom in Florida, including Nandi, Obama’s mother, born in captivity in the US.

“To have an infant born here for the first time in 28 years, completely naturally, after this animal became extinct is something really special,” said Genade.

One of the other females gave birth to a stillborn calf earlier this year.

But now two of the other females in the group are also pregnant, with one baby due in November or December and the next early in 2010.

This entry was posted on Saturday, July 18th, 2009 at 1:49 pm and is filed under Go See. You can follow any responses to this entry through the RSS 2.0 feed. You can leave a response, or trackback from your own site.