Some of the 40,000 clay figures from Field for the British Isles. Via Torre Abbey

One of the largest Medieval Monasteries in the UK is hosting the most recent addition to Antony Gormley’s Turner-prize-winning  Field series, Field for the British Isles. Earlier works from this series were created and displayed in Mexico, Sweden, London and Porto Velho in the Amazon Basin. The show runs through August 23, 2009. Presently Gormley’s One & Other project is underway on the fourth plinth in Trafalgar Square, London.

Volunteer, Natalie Elder, adding more figures to Field for the British Isles. Via The Telegraph

Gormley, an artist well-known to depart from the traditional sculptural materials such as marble or bronze, stated upon the conception of this project in 1991 that his mission was to “make something as direct as possible with clay: the earth“. 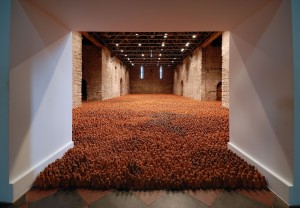 As with the previous installations in the Field series, in the creation of Field for the British Isles Gormley collaborated with the local community to create the 40,000 clay figures which fill Torre Abbey’s huge Spanish Barn. Each member of Gormley’s team of volunteers were given instructions to mold a small ball of clay into a standing figure with two eyes. It is estimated that 200 of these figures could be created by one person in a day. Gormley stated: “Each one of these works comes from a lived moment. It is a materialisation of a moment of lived time, in the same way that my other work is a materialisation of a lived moment in time, and they have a very particular presence, each of them.”

A local volunteer groups the figures. Via The English Riviera 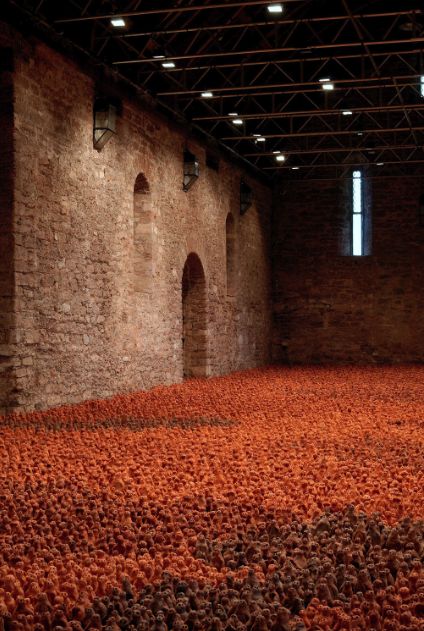 The Spanish Barn. Via Devon Online

This entry was posted on Thursday, August 20th, 2009 at 2:26 pm and is filed under Go See. You can follow any responses to this entry through the RSS 2.0 feed. You can leave a response, or trackback from your own site.