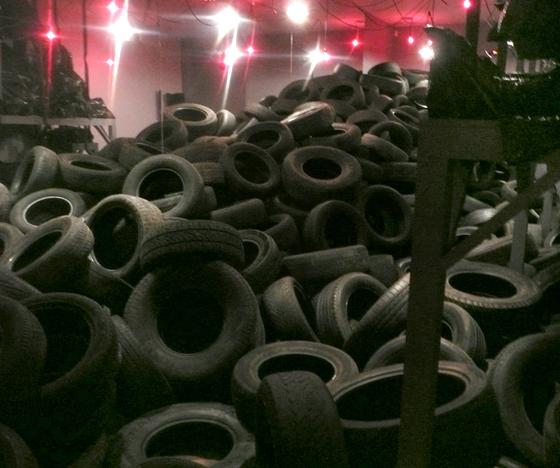 Dramatic reinventions of Allan Kaprow’s ‘YARD‘ are currently on show at various locations in New York City; the primary site, showcasing the sprawling reinvention realized by the famed performance artist William Pope L., is the Manhattan townhouse at 32 East 69th Street where Kaprow first exhibited his Environment YARD in 1961. The townhouse was then home to the legendary Martha Jackson Gallery and has just now opened as Hauser &Wirth’s first American Gallery.  Hauser & Wirth has extended the show to include reinventions of YARD in public spaces in Queens and downtown Manhattan by the two noted artists Josiah McElheny and Sharon Hayes.

Sketch by William Pope L. for YARD (to harrow). Via Hauser & Wirth

Since its first exhibition in 1961 in the court at 32 East 69th Street, until his death in 2006, Kaprow reinvented his Environment Yard in 10 different locations worldwide – always taking the form of a huge heap of auto tires through which visitors were encouraged to crawl and jump.

All of Kaprow’s ‘Happenings’ and ‘Environments’ were concieved with the hope that they could be reinvented by other people at different times and locations; he himself encouraged, “reinvention, not reenactment.” The three artists featured in this show were selected by the curator, Helen Molesworth, due to her belief in their ability to uniquely follow Kaprow’s simple set of master instructions for all future presentations of his vision: “Look at the documentation. Reinvent the pieces.”

Allan Kaprow greatly encouraged the incorporation of improvisation and audience participation into his works, “Life is much more interesting than art… the line between life and art should be kept as fluid, and perhaps indistinct, as possible.” Titled, ‘Yard (To Harrow)’ Pope L.’s reinvention of the work somewhat ignores this playful impetus of Kaprow’s first YARD, something encouraged by his desire for visitors to jump and crawl through the mountains of rubber tires and tarpaper-wrapped forms. In contrast, Pope L. has focused primarily on the more harrowing aspect of the work… “the unsaid, the unmentioned and less decipherable aspects that are embedded within it but felt.”

Pope L.’s reinvention has truly taken over the first floor of the new Hauser & Wirth gallery; some 1,200 tires engulf the space along with black body bags to create an undulating landscape enhanced by mirrors, continuing shining lights and a soundscape consisting of lapping waves, distant train whistles and a voice that re-contextualises Kaprow’s own instructions to “rearrange the tires.” The exhibition is accompanied on the second floor by archival material related to Kaprow’s YARD selected by Barry Rosen, advisor to the Estate of Allan Kaprow.

Sketch for YARD (to harrow) by William Pope L. Via Hauser & Wirth

Titled ‘Yard (junk yard) 1961/2009′ McElheny’s reinvention of the project is an enormous photo projection at the Queen’s Museum of Art in Flushing, on view through October 4. Hayes reinvention – ‘YARD (sign)’ – is located in the New York Marble Cemetery in the Lower East Side of Manhattan and will take the form of hand-painted signs which she has scattered over the cemetery.

This entry was posted on Sunday, September 27th, 2009 at 12:06 pm and is filed under Go See. You can follow any responses to this entry through the RSS 2.0 feed. You can leave a response, or trackback from your own site.