AO Interview: Neckface, whose “Devil’s Disciple” is opening at O.H.W.O.W. in Miami October 31, 2009 shares his thoughts with Art Observed 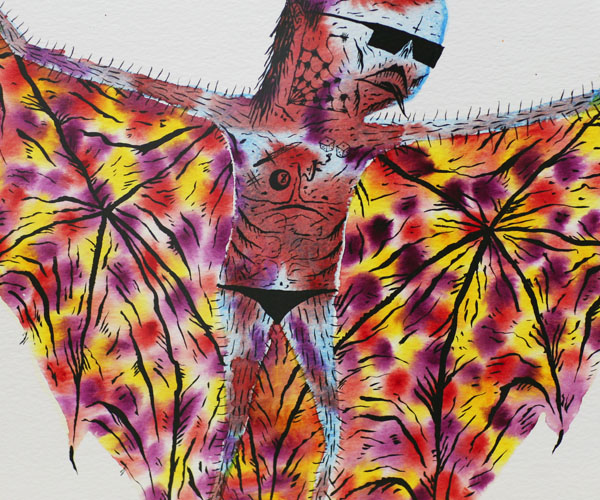 Opening this Halloween at O.H.W.O.W. gallery in Miami is what some may call a 10,000 square feet haunted house, and others may refer to as a large-scale site-specific installation leading to the exhibit by Neckface.  “Devil’s Disciple”, the artist’s first solo show in Miami, already has, and will undoubtedly continue to contribute to the ongoing dialectic that revolves around Neckface. As the masked idol of thousands repeatedly breaks the boundaries of acceptable, he simultaneously manages to maintain and excite the curiosity of art historians and climb the rigid hierarchy he so opposes. Perhaps, it is the innocence in the immediacy of expression that makes charming what otherwise is conceived as revolting; perhaps art world misses the documented urge of expression.
When asked about his inspiration and creative process Neckface answers: “Somtimes its just fucked up situations that i think of in my head, sometimes its what i would really like to do to someone, whether it would be an ex-girlfriend or somebody who pissed me off earlier in the day …” It is the brutal, almost primal and ironically- the unmasked, that pulls the viewer in Neckface’s world.  Sartre writes “I am the one who pulls myself from the nothingness to which I aspire: the hatred, the disgust of existing, these are as many ways to make myself exist, to thrust myself into existence”. Neckface’s step into the realm coined as “aesthetic of disgust” is endearing and effective for it is uncalculated and raw. “Devil’s Disciple” will be opening at O.H.W.O.W. on October 31, 2009. “Halloween is my day. Some people like Christmas, I like Halloween” explains the artist. 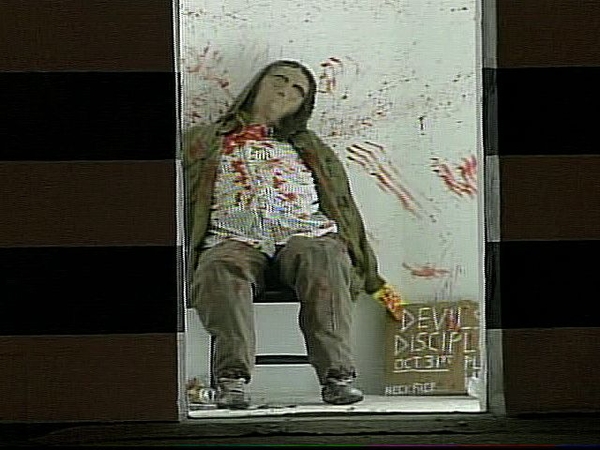 Neckface creates a dummy in the window of O.H.W.O.W. via NBC Miami

More text, pictures, video and excerpts from Neckface’s answers to AO after the jump… 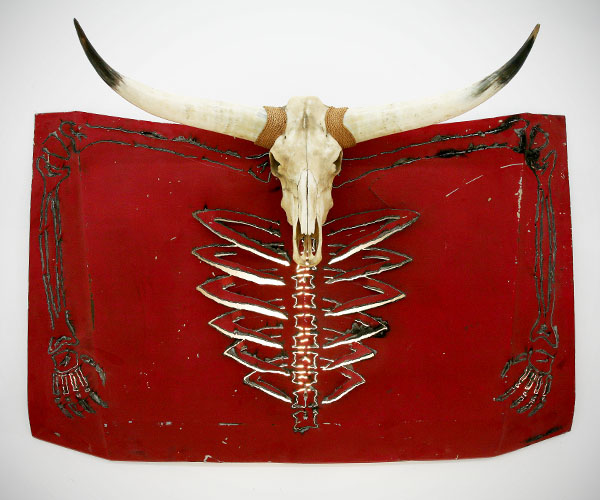 Deleuze when explaining the genius of Foucault speaks of producing new kinds of statements, Lenin has done so, 1968 has done so, and even Hitler he says, was a great producer of new statements.  “New statements can be diabolical” …  The idea as Deleuze describes it, is to see something imperceptible, to think at something’s limit, to reach the intolerable, otherwise the statement does not encompass both seeing and speaking. The 25 year old Neckface has reached the intolerable. Perhaps this serves as a reason for the increasing interest of art critics, gallery owners and auction house professionals in the work created by the enigmatic street artist. 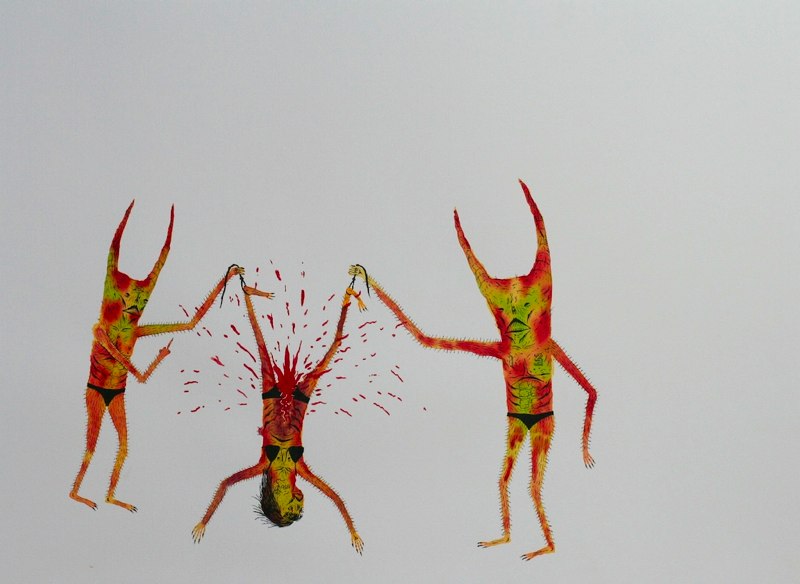 Neckface transformed the entire space of O.H.W.O.W. gallery, thus becoming the curator of his own show. “That’s a lot of space to fill” he says “so I asked my family to help me out. My family has been doing a haunted house for the past 25 years in front of our house. They do it every year in my hometown. So I shipped all the Halloween stuff out here and I flew my whole family out so they could make it here, I’m forcing everyone to go through the house in order to get into my show”. Also for “Devil’s Disciple” opening Neckface arranges a skate demo. With a long history in the skating community, Neckface invites Baker and Deathwish Team, one of the best skate teams in the US, to put on a demo show throughout the evening of his opening on Halloween.

Neckface tells us about the last time he created a show on Halloween: “It was awesome, everybody showed up to the show in costume, it was like a freak show. I love it.” And when asked about the sources of his inspiration, the young artist responds: “I am inspired by a lot of stuff that’s not inspiring to anyone else, crackheads on the street, retarded people, dirty lil kids with chocolate all over their face, seeing car accidents, serial killers, losing at scratch tickets, being broke, getting stuck in an elevator, not giving money to the homeless, dog fights, stepping in human shit, the smell of burnt hair. I am inspired by all kinds of weird shit, as far as artists, I like Ned Kelly, Ted Bundy, Richard Ramirez, The Unbomber, Snoop Dogg, and Ed Gein.”

This entry was posted on Friday, October 30th, 2009 at 5:33 pm and is filed under Go See. You can follow any responses to this entry through the RSS 2.0 feed. You can leave a response, or trackback from your own site.