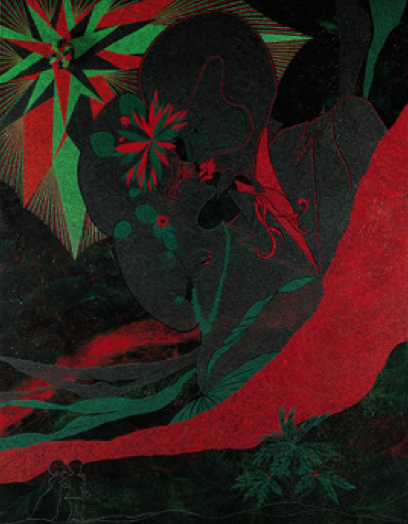 Afro Apparition, Chris Ofili (b.1968) all pictures from Sotheby’s unless otherwise noted.

Today Sotheby’s London held their October Contemporary Art Auction to coincide with Frieze Art Fair which is currently underway in London’s Regent’s Park and art observed was on site with coverage.  The 223 lot auction comprised of work, in a range of media, by leading post-war artists such as Jean-Michel Basquiat, Chris Ofili, Gerhard Richter, Anish Kapoor, Damien Hirst, Frank Auerbach, Anthony Gormley, Farhad Moshiri and Yan Pei Ming. 73% of the contemporary works were sold and the eventual total of the sales came in at  12,757,125 GBP. All sale totals stated in this article include buyer’s premiums and come directly from Sotheby’s official website or courtesy of The Baer Faxt.

Related Links:
Sotheby’s Homepage
Autumn Fairs are a Barometer for the Art Market [NYTimes]
Can Frieze reheat the art market? [The Independent]

Isabelle Paagman, Director and Specialist in Contemporary Art and Alex Branczik, Deputy Director and Specialist in Contemporary Art, said: “With the forthcoming sale, our aim was to assemble an auction that would complement the London Frieze Fair and include important Evening and Day Sale quality works at attractive estimates by established Post-War and Contemporary names as well as cutting-edge artists. As with the February and June auctions in London and May in New York, we have been extremely selective and have focused on fresh to the market property with outstanding provenance, which would appeal to our clients in the current market.” 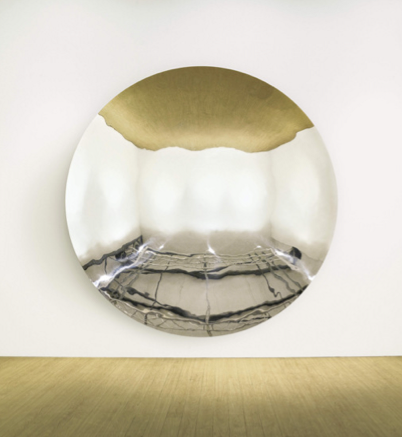 Coinciding with his retrospective at London’s Royal Academy, Anish Kapoor’s Untitled, was noted as a highlight by Sotheby’s before the auction had taken off. Executed in 1997, a time marking Kapoor’s breakthrough with this type of reflective material, in material and spatial possibilities that characterize the very best output of this world-renowned sculptor. It was estimated to sell between 600,000 – 800,000 GBP and eventually went for above estimates at 825,250 GBP. 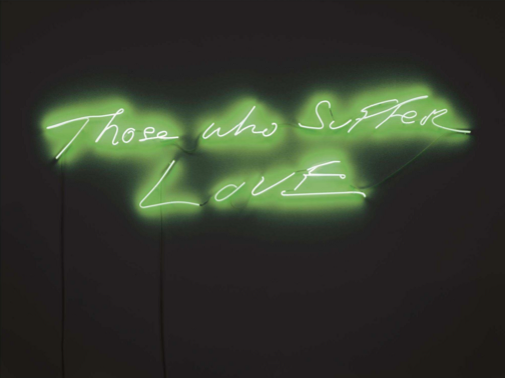 Those Who Suffer Love, Tracey Emin

Tracey Emin was present in the front row of the Sotheby’s sale this afternoon and aided in the auctioning of her own work, Those Who Suffer Love. The neon work was the title piece of Emin’s solo show at White Cube Masons’ Yard earlier this year and it sold at, 49,250 GBP – much over its intial estimate of 20,000 – 30,000 GBP. This work was part of a series of nine exhibits auctioned today that were donated by artists such as Jake and Dinos Chapman, Tracey Emin, Rachel Howard, Anselm Kiefer, Sarah Lucas, Grayson Perry, Boo Ritson, Conrad Shawcross and Bernar Venet for which the proceeds are to be donated to Harefield Hospital. 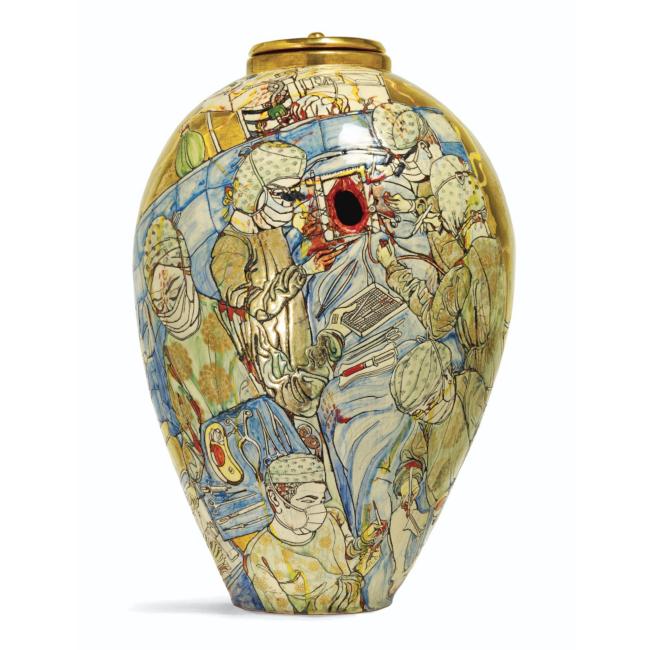 The greatest anticipated work in the lot was Chris Ofili’s, Afro Apparition which sold for 577,250 GBP to Fatima Maleki; a price high-over its estimated price of 280,000—350,000 GBP. A work described by Sotheby’s as “the most important work by the artist ever to appear at auction.” One of a suite of works exhibited as part of ‘Within Reach’ for the 2003 Venice Biennale, Afro Apparition is a stunning example of Ofili’s explorations of the interplay between cultural stereotyping and identity, aesthetic beauty and materials.In her review of the Biennale, the Observer‘s Laura Cummings singled out Afro Apparition as the “Best of all” the artist’s works on display, calling it a composition “in which Ofili takes his method to the limit. The surface is encrusted with disco-dust and zillions of iridescent dots that create a kind of heat-haze in which the lovers all but disappear in a fronded glade.”

Another work causing a great stir prior to the auction was Jean-Michel Basquiat’s, Fuego Flores; a painting executed when Basquiat was only 23 years-old – the very height of his brief and brilliant artistic existence. Text, word-play and his unique poetry were paramount constituents to his street art, and his innovative and brilliant use of language adorns his most highly regarded paintings such as this painting in which his words, “FLOWER – FLOWERS, FLORES” and “FIRE – FIRE(S), FUEGO” cover the top, left-hand corner of the image.  Such is the importance of this image in Basquiat’s oevure, it is reflected in the final sale price of the piece – 959,650 GBP. 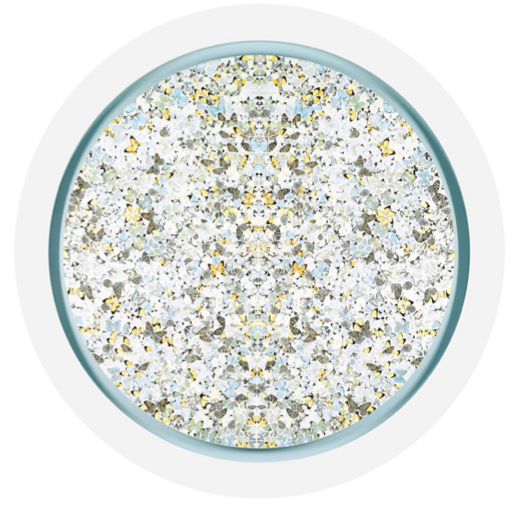 Jose Mugrabi,  described by the New York Times as a man “with a lot of toys he never plays with”, today paid 541,250 GBP for another toy to put on his shelf – Damien Hirst’s Retribution. This monumental piece comes from Hirst’s celebrated series of butterfly grid paintings; the butterfly for Hirst holds considerable iconographic power and meaning. As he explained, “You need to find universal triggers, everyone’s frightened of glass, everyone’s frightened of sharks, everyone loves butterflies”

While Mugrabi may be “The Man With 800 Warhols,” today he missed the chance to own Warhol’s portrait of Joseph Beuys which was bought by White Cube for 301,250 GBP. Joseph Beuys and Andy Warhol met for the first time at Hans Mayer’s gallery in Düsseldorf in 1979, a year before this painting was completed in 1980. 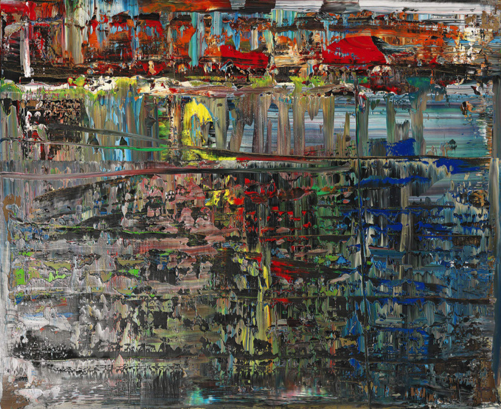 While all of these excitable pieces sold well over their estimated prices, Gerhard Richter’s Abstraktes Bild sold at 529,250 GBP only a slight margin over its estimate. Executed in 1990, Abstraktes Bild is a wonderfully complex interplay of ambiguity and colour. With its lyrical and reflective qualities resonating both on the surface and deep within the layers of paint, Gerhard Richter here epitomizes his explorations into Abstraction, which he began in 1976, and seems to both reveal and conceal. 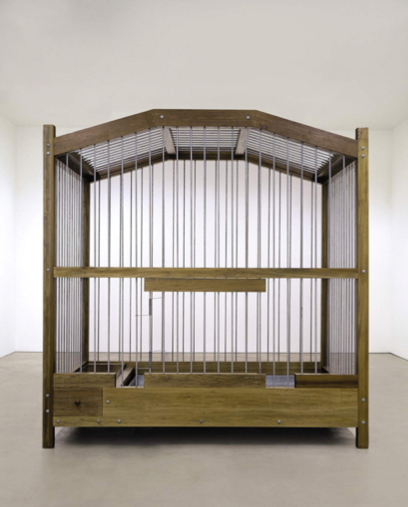 This entry was posted on Friday, October 16th, 2009 at 7:24 pm and is filed under Art News, Auction Results. You can follow any responses to this entry through the RSS 2.0 feed. You can leave a response, or trackback from your own site.