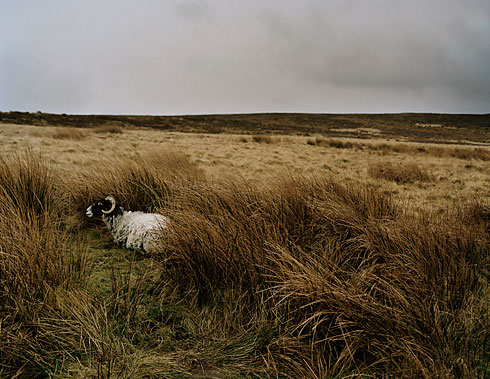 Ghosts – an exhibition of photographs by Sam Taylor-Wood – is currently in its last days at the Brontë Parsonage Museum in West Yorkshire, England. The Ghosts series was originally exhibited as part of Taylor-Wood’s most recent show, Yes I No, at White Cube in October 2008. Now exhibited in the former home of the famed Brontë sisters – Charlotte, Emily and Anne – a new emphasis is brought to the series which should be apparent to any reader of Emily Brontë’s passionate novel, Wuthering Heights. All of Taylor-Wood’s photographs were shot in a four-mile radius of the supposed backdrop of Wuthering Heights and capture the bleak and unremitting landscape of the moors which echoes the brutal portrayal of heightened passion and suffering found in the fictional novel.

More text and related links and images after the jump….. 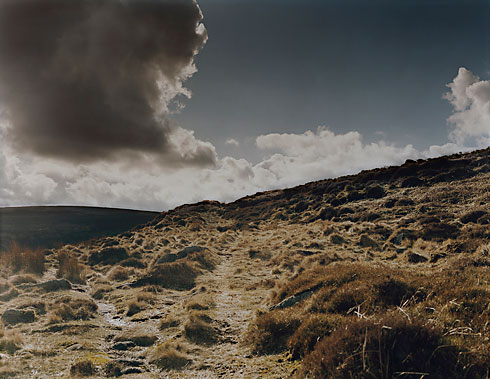 “We hope that by exhibiting Ghosts in the place that inspired it, new layers and connections will be drawn between the work and the Parsonage, as well as offering the public a unique opportunity to see important contemporary art in an unusual setting” stated Jenna Holmes, Arts Officer at the Brontë Parsonage Museum. The photographs have been re-sized to suitably fit the Parsonage Museum and will be exhibited are being exhibited as part of its Contemporary Arts Programme 2009.

Taylor-Wood first read Wuthering Heights only months before embarking on her series. One night while at her second-home in North Yorkshire, prior to her break-up with gallery-owner Jay Jopling, she felt compelled to experience a novel she hoped to be “fantastically romantic.” After reading, Taylor-Wood felt it necessary to experience the wild landscape and the turbulent emotional weather that had inspired Brontë and so she set off on a trek across the moors with an assistant and camera equipment in the middle of February- a time of year Taylor-Wood described as prefect; “freezing cold.” Taylor-Wood and her assistant walked for hours in the unremitting sleet and winds. A moment of relief came when the pair finally reached Top Withins – the site of the action in Wuthering Heights – when the clouds parted and the sun appeared as captured in Ghosts IV.

Traces of the novel are to be found in Taylor-Wood’s landscapes. Ghosts II depicts two solitary leafless trees that twist towards each other, a painting Taylor-Wood calls “Cathy and Heathcliff” – it therefore serves undeniably as a testament Brontë’s characters and to the all-encompassing love that destroyed them and all those around them.

Ghosts I, Sam Taylor-Wood (2008) via The Independent

Taylor-Wood explores other classic stories in her photographs yet a hopelessly romantic pulse seems to run through the show. In an interview with the Independent upon her show at White Cube in 2008, Taylor-Wood cited Ghosts I as her favourite photograph in the series “…..because it reminds me of the cinematic landscape present in David Lean’s big-screen epics such as ‘Lawrence of Arabia’. It’s almost as if your hero is going to come riding over the top of the sand dunes. It is quite barren and empty but there is also that sense of something coming over the horizon.”

The show continues through November 2 and is free on admission to the museum.

This entry was posted on Thursday, October 29th, 2009 at 5:41 pm and is filed under Go See. You can follow any responses to this entry through the RSS 2.0 feed. You can leave a response, or trackback from your own site.