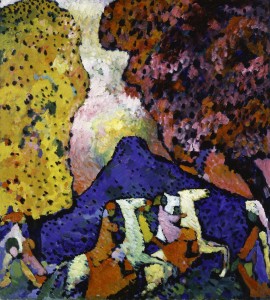 Blue Mountain (1908-09) by Wassily Kandinsky, via The Guggenheim

Currently on view at the Guggenheim in New York is “Kandinsky”, a retrospective of the paintings of Wassily Kandinsky.  A visionary artist and theorist, Kandinsky was the pioneer of abstraction.  The first comprehensive exhibition of the artist’s work in the United States since three surveys which were displayed by the Guggenheim in the 1980s, the exhibition presents around 100 of Kandinsky’s most important works from 1902 to 1942 drawn primarily from the three largest collections of the artist’s work at the Centre Pompidou in Paris, the Solomon R. Guggenheim Foundation in New York, and the Stadtische Galerie im Lenbachhaus und Kunstbau in Munich as well as also from significant private and public collections. The retrospective focuses on key events which shaped the artist’s life and oeuvre notably those of two world wars and the Russian Revolution. The retrospective also marks the Guggenheim’s 50th Anniversary celebration. 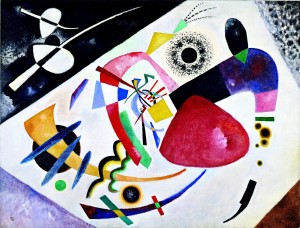 Red Spot II (1921) by Wassily Kandinsky, via The Guggenheim 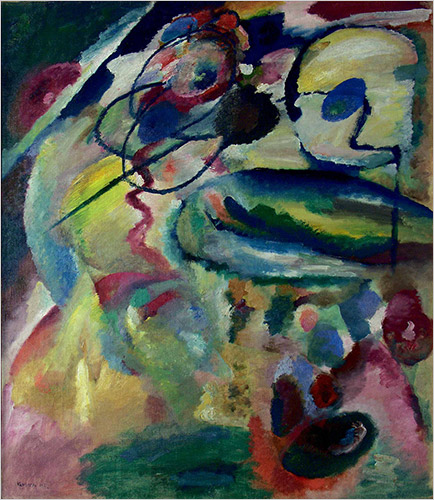 Picture with a Circle (1911) by Wassily Kandinsky, via The New York Times

Ninety-nine Kandinsky paintings are placed in chronological order from the bottom to the top of Frank Lloyd Wright’s great rotunda, a display which the NY Times calls “sensational.” A side gallery highlights a large exhibit of works on paper. Superb loans from collections across the world include the 1911 “Picture with a Circle” from the Georgian National Museum in Tbilisi which has never previously been seen in the United States. Said to be the artist’s first abstract painting, the work features a blur of gorgeous dancing blues, greens and purples complete with a few sharp lines of black across the top. 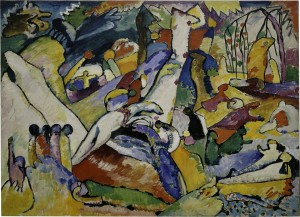 Sketch for Composition II (1909-1910) by Wassily Kandinsky, via The Guggenheim

The retrospective is exceptional because of Kandinsky’s relationship to the Guggenheim as its foundational artist, for instance, The Museum of Modern Art has in this regard Picasso and Matisse and the Whitney Museum of American Art has Edward Hopper.  In addition, Kandinsky’s compositions, which continually move harmoniously even with distorted lines and diagonals show a kinship with Frank Lloyd Wright’s abstract architectural design of the museum. 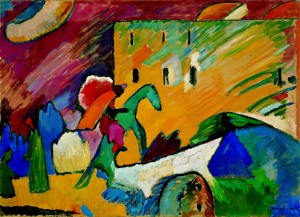 Improvisation 3 (1909) by Wassily Kandinsky, via The Guggenheim

Wright was chosen by Hilla Rebay, a German painter and the Museum’s founding director who was also a lover of Kandinsky.  Solomon R. Guggenheim, her patron, seems to have followed her stead.  Between 1929 and 1949 he acquired countless works by the artist states a NY Times article. Each one was given to the Museum of Non-Objective Painting which he and Rebay founded in 1937 which was renamed Guggenheim in his honor in 1952. 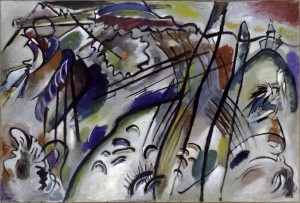 Improvisation 28 (1912) by Kandinsky, via The Guggenheim

Many critics have remarked of the show’s limitations in respect to the immensity of Kandinsky’s extraordinary artistic insight. As a recent NY Times article stated, “The Guggenheim’s lean, clean presentation makes the show as much a Kandinsky-Wright reunion as a retrospective.” Kandinsky’s vision as an artist is seen in his activities as a theoretician, essayist, poet and arts community organizer. His best-known books are “Concerning the Spiritual in Art” (1912) and “Point and Line to Plane” (1926) where he reveals his remarkable ability to use language as way of signaling the formal effect of different colors, shapes, and lines each which he believed attributed a sound.  For Kandinsky, art was meant to be experienced “with all of one’s senses.” 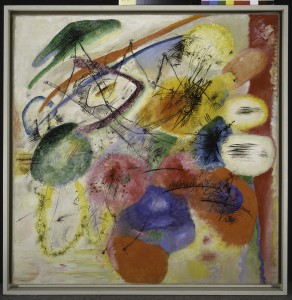 Black Lines (1913) by Wassily Kandinsky, via The Guggenheim

The current show emphasizes the artist’s painting career. His style changes according to location and circumstance. In Moscow he tended towards Constructivism, in Paris Surrealism, and toward Paul Klee while residing at the Bauhaus. The show reveals the limits of abstraction and perhaps the genius of Kandinsky to make such unrecognizable forms at once sane and logical. As David Kuspit puts it in his article Falling Apart and Holding Together: Kandinsky’s Development, “Kandinsky’s abstractions are anti-climatic, and suggest that abstraction has lost its madness, and become as sane and conventional–and pompous–as the decadent representation it replaced.” 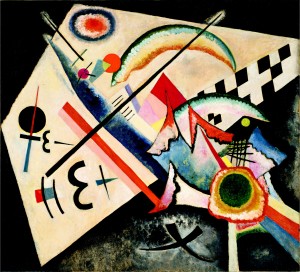 White Cross (1922) by Wassily Kandinsky, via The Guggenheim

It was in New York that American artists found the artist as a useful guide in their path towards abstraction, in part because his works were visible at the Museum of Non-Objective Art. His influences can be seen in the work of Armenian-born American Abstract Expressionist painter Arshile Gorky and German-born New York-based Hans Hofmann.  “Kandinsky” at the Guggenheim celebrates the artist, the Guggenheim museum, and his revolution in abstract art.

US Fed News Service, Including US State News January 12, 2007 The U.S. Department of Justice issued the following press release:

The Justice Department has today reached a settlement resolving allegations that Compass Bank of Birmingham, Ala., engaged in a pattern of lending discrimination against individuals based on their marital status. go to website compass bank online

The government’s complaint alleges that Compass Bank violated the Equal Credit Opportunity Act, which makes it unlawful for any creditor to discriminate against any applicant based on race, color, religion, national origin, sex, marital status or age by unlawfully charging higher interest rates to co-applicants for automobile loans who were not married to each other than to co-applicants who were married.

The Justice Department and Compass Bank reached a consent order, which was filed in conjunction with the complaint, in federal district court in Birmingham, Ala. Under the agreement, which remains subject to court approval, Compass Bank is prohibited from discriminating on the basis of marital status in any aspect of its automobile lending.

“Under the law, marital status should have no effect on an individual’s access to credit,” said Wan J. Kim, Assistant Attorney General for the Civil Rights Division. “We will continue to vigorously enforce the federal laws that prevent discrimination in credit and lending services. We commend Compass Bank for working cooperatively with the Justice Department in reaching an appropriate resolution of this case.” Compass Bank has already implemented changes to its lending procedures that explicitly prohibit distinctions based on marital status, and it is required to maintain these changes under the agreement. In addition, Compass Bank will pay up to $1.75 million plus interest to non-spousal co-applicants who were charged higher interest rates, and it will provide enhanced equal credit opportunity training to its officers and employees who set rates for automobile loans. website compass bank online

The Federal Reserve Board referred this matter to the Justice Department for enforcement after its 2003 periodic examination gave the Board reason to believe that Compass Bank’s loan pricing procedures and directives constituted a pattern or practice of discrimination. Compass Bank cooperated fully with both the Board’s and the Department’s investigations into its lending practices and agreed to settle this matter without contested litigation.

Since January 1, 2001, the Justice Department’s Civil Rights Division has filed 216 cases to enforce the Fair Housing Act and 7 cases under the Equal Credit Opportunity Act.

This entry was posted on Saturday, October 3rd, 2009 at 4:10 pm and is filed under Go See. You can follow any responses to this entry through the RSS 2.0 feed. You can leave a response, or trackback from your own site.