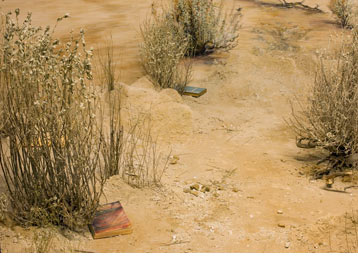 A detail view of literary texts within a dessert terrain diorama, from Gonzalez-Foerster’s exhibition at the Hispanic Society of America.  Via Dia Art Foundation.

Currently showing at the Hispanic Society of America is an exhibition by Paris and Rio de Janeiro based artist Dominique Gonzalez-Foerster.  The show, which  functions as a kind of expansion of the society’s renowned research library,  consists of a range of twentieth-century literature installed in a series of three dioramas, by reference to their place of origin. The various texts, written by some 40 authors, hail from three distinct geographical regions: the dessert, the tropics and the North Atlantic. Entitled “chronotopes and dioramas,” the site-specific project is the third in a series of contemporary art exhibitions commissioned by the Dia Art Foundation for the Hispanic Society of America, which rests in the Washington Heights section of Manhattan. Organized by the Dia Art Foundation’s curator at large, Lynne Cooke, the exhibition marks Gonzalez-Foerster’s first major solo show in the United States.

An installation view of one of Gonzalez-Foerster’s modeled oceanic terrains, (2009) Via Dia Foundation. “I always wanted to be a writer, but writing is very difficult for me,” the artist has said. “Slowly I accepted the idea of a kind of expanded literature, you might say.” 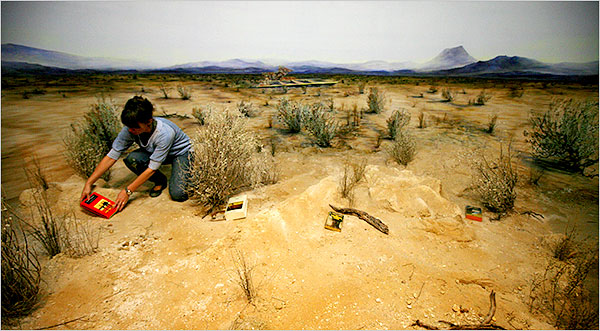 Constructing the literary landscape; “Joianne Bittle Knight places books in the diorama.” Photo from the Librado Romero, (2009)  Via NYTimes. 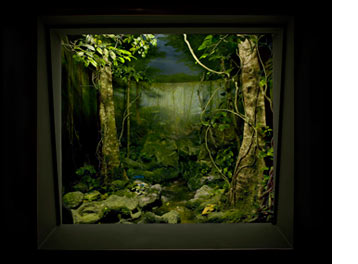 The exhibition, which is situated within a  3,700 square foot gallery, inside of  the society’s former Museum of the American Indian, consists of three dioramas abounding with a selection of texts– some well known and others more personally significant to the artist. Included in the geographical settings are works by J.G Ballard, Roberto Balano, Jorge Luis Borges, Samuel Delany and Clarice Lispector.  Franz Kafka, Aldolfo Bioy Casares and Gertrude Stein are grouped together in the North Atlantic terrain, being writers whom Gonzalez-Foerster see as links between Europe and the Americas, while Paul Bowles, Elizabeth Bishop and Oswald de Andrade are grouped together under the tropical– their literature presented amidst a rain-forest terrain with ruins of a Modernist house emerging from the wild underbrush. 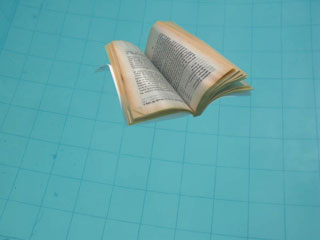 Dominique Gonzalez-Foerster, Untitled, (2009). One of the artist’s chosen literary works for her exhibit ‘chronotopes and dioramas.’ Via Hispanic Society of America.

The trio of large-scale dioramas encasing the literary works stands at the center of the gallery and reaches floor to ceiling, with a width of about forty feet. The model environments, which are inspired by traditional natural history museum displays, depict particular regions with specific climates and ecologies. Inhabited by books instead of animals, the scenes were realized by a diorama muralist along with a team of specialists from the American Museum of Natural History in New York. 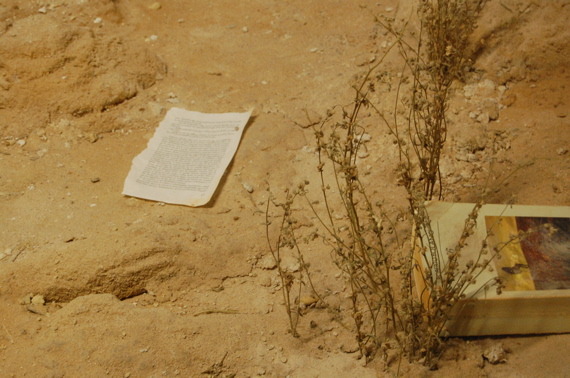 Dominique Gonzalez-Foerster. Mixing text with terrain; a detail view of writing strewn upon a dessert ground. (2009). Via Dia Art Foundation.

On the exterior surface of the dioramas, in a kind of “panoramic calligram,” are a range of printed quotations and texts, such as “What is geography?” Within the topographies themselves, literary works are cited, acting “like the flora and fauna specimens of natural history habitat displays, as if they were the ‘indigenous inhabitants’ of each terrain. “It’s a way of trying to organize a very visual library,” the artist has stated, “to treat books almost like living beings.” Further, the artist’s presentation works to augment the society’s existing historical library of  contemporary Iberian and Latin American literature, while also providing a kind of parallel to the society’s geographically based model of collecting their holdings, which include an abundance of history–letters, novels, sailing charts, marriage contracts and other documents dating back as far as the 12 century. 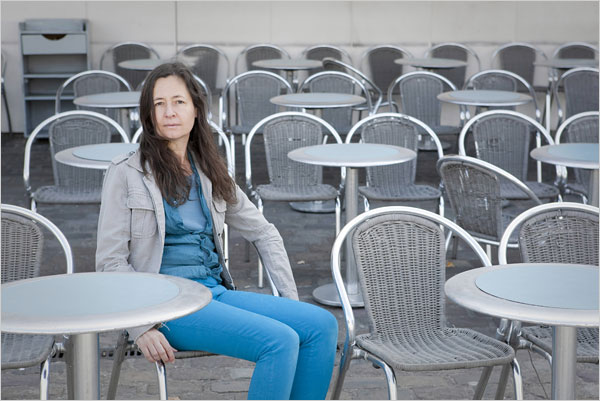 A portrait of Dominique Gonzalez-Foerster taken by Valerio Mezzanotti. Via NYTimes.

Dominique Gonzalez-Foerster was born in 1965 in Strasbourg, France and lives and works in Paris and Rio de Janiero. She has had numerous solo exhibitions including those at The Turbine Hall, Tate Modern, MUSAC Museo de Arte Contemporaneo de Castilla y Leon, Musee d’Art Moderne de la Ville de Paris, Kunsthalle Zurich and Centre Georges Pompidou in Paris, among others. In 2002, she won the Marcel Duchamp Prize. The artist is known for her “post-conceptual” approach to art, which places less emphasis on creating objects and more emphasis on creating a particular atmospheric and sensorial experience. “Chronotopes and dioramas” will be on exhibit at the Hispanic Society of America through April 18th, 2010.

Lemieux Has Hodgkin’s // Disease Not Threat to Career

Lemieux, 27, the NHL’s leading scorer, was diagnosed in the early stages of the disease after a large lymph node was removed from his neck, according to a statement issued by the Pittsburgh Penguins and approved by team physician Charles Burke.

Hodgkin’s disease, named for the English physician who discovered it, is a disease of unknown cause characterized by the progressive enlargement of the lymph nodes and inflammation of some body organs such as the spleen and liver.

Lemieux wasn’t available for comment and no Penguins team officials would discuss the illness. General manager Craig Patrick was in California, reportedly meeting with team owner Howard Baldwin, but is to return for a news conference Friday that Lemieux will also attend.

Earlier Tuesday, Lemieux’s teammates made their annual visit to Children’s Hospital, but Lemieux was not present. Lemieux reportedly underwent treatment Tuesday in Allegheny General Hospital, but the Penguins would not confirm that.

Hodgkin’s disease is marked by a chronic enlargement of the lymph nodes, the small, compact structures that line the blood vessels and manufacture infection-fighting antibodies. go to web site hodgkin s disease

The fact that Lemieux is undergoing radiation therapy is an indication that doctors found the cancer in its early stages, said Dr. Dennis Meisner, an oncologist at Shadyside Hospital in Pittsburgh.

He said the Penguins’ contention that the type of Hodgkin’s diagnosed in Lemieux’s case as the “most favorable” may be misleading.

“It is a cancer, and all types of cancer are very serious,” Meisner said. “As a cancer, it can become life-threatening.”

This entry was posted on Friday, November 20th, 2009 at 9:24 am and is filed under Go See. You can follow any responses to this entry through the RSS 2.0 feed. You can leave a response, or trackback from your own site.