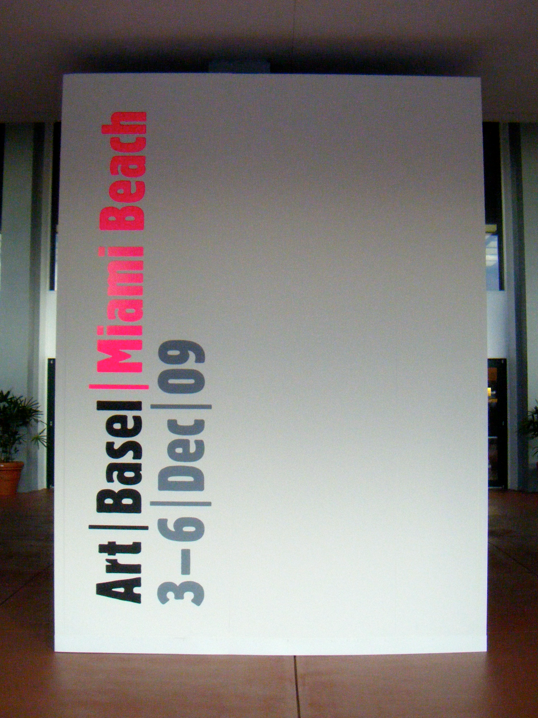 Art Observed is currently in Miami preparing for tomorrow’s preview of the eighth edition of America’s largest contemporary art fair: Art Basel Miami Beach which will open to the public on Thursday December 3 and run through December 6.  More than 250 of the some of the most prestigious galleries from across the world will present over 2,000 artists of the 20th and 21st Centuries.  Earlier this year at Frieze Art Fair in London, organizers told the New York Times there were reports of ”significant sales from new and established galleries exhibiting at the 2009 fair.” Now, in light of results that exceeded expectations at Sotheby’s and Christie’s evening sales – with the former fetching $134.4m for 55 lots and the latter bagging $74.2m for 39 lots – there is further reason for confidence to be restored in the art world.

More text and related links after the jump….
The layout of the Miami Beach Convention Center, has been redesigned adding 20 per cent more exhibition space across allowing for larger booths in the main art galleries area. 85 per cent of the dealers from last year have returned this year and this year are joined by younger galleries, which in the past have been placed in containers in a different section of Miami Beach – this area has been re-named Oceanfront and is will play home to performances, video and panel discussions.

While Art Basel Miami Beach may be the main event, the sprawling circuit of satellite fairs has turned the event into a much larger happening for both Miami and Miami Beach. When Art Basel first touched down in Miami in 2002 only one other art fair set up shop nearby. Last year, despite worries about the state of the art market gnawing at its edges, the surrounding scene remained as vibrant as ever boasting a roster of 24 Satellite fairs – a peak number.  However, this year amidst talk of troubling drop-offs in gallery bookings the official list of Satellite fairs has shrunk to only 19. While ArtObserved is set focus coverage in Miami on the Art Basel Miami Beach we hope to dedicate time to a number of these fairs particularly New Art Dealers Alliance (NADA), Pulse, Scope, the Red Dot Art Fair and the “guerrilla-style” Fountain Art Fair.

Further to the important satellite fairs many local galleries are using the artistic zeitgeist created by the fair as an opportunity to showcase their own interests. OHWOW Gallery will host STAGES- an exhibit comprised of commissioned works by over twenty established contemporary artists in support of Lance Armstrong’s LIVESTRONG message and to raise funds for the Lance Armstrong Foundation. Alongside the second installment of their exhibition It Ain’t Fair, an international group show that will feature works from over 30 artists, OHWOW Gallery are set reveal photographs by Musical visionary Danger Mouse and filmmaker David Lynch taken from their project Dark Night of the Soul.

While the throng of exhibitions and booths are certainly the focal point this week in Miami, with the art world comes a host of frivolous parties and after-hour events. Earlier this week, New York Magazine stated that decadence will return to Art Basel this year with the return of Pucci to the list of luxury goods companies sponsoring the fair that includes Montcler and Cartier – all of whom will host lavish parties and events. In their VIP lounge on Wednesday, Cartier will unveil a bejeweled seven-foot tall spire entitled the “Cartier Column” and in an equally decadent manner, Audi have built a 1,000-seat auditorium featuring two revolving platforms to exhibit their new $100,000 Audi A8. In light of this extravagance, Cartier are to forgo their elaborate “dome” that was built in the past near the Miami Beach Convention Center  and Bloomberg have reported that event sponsors UBS, who lost $20 billion in 2008, are to withdraw their famed Caviar Tent.

Local galleries will also play host to a number of parties – tonight the North Miami’s Museum of Contemporary Art (MOCA) will throw a party on the occasion of the opening of their exhibition The Reach of Realism with the help of Vanity Fair and Grey Goose Vodka. Throughout the week OHWOW are celebrating the 20 year anniversary of New York’s legendary bar ‘Max Fish’ by taking over a functioning bar space in downtown miami in which they will recreate an art installation from the core elements of the bar’s Lower East Side location. In addition to this, Rosa and Carlos de la Cruz will host a party to open a new three-story, 30,000 sq. ft. space designed by John Marquette created in order to house their personal collection.

In an effort to escape the artificial lighting of the press room and enjoy a little of our time in the Sunshine Sate, ArtObserved will be joining editors  and  contributors from Interview Magazine poolside at the Mondrian hotel at their Daily  from  1pm‐6pm parties created to “ease the working  day.” While at the Mondrian we will be sure to check out The Luxury Semi-Automatic Vending Machine. Located in the Hotel’s lobby, the machine was curated by Interview Magazine to celebrate 40 years of pop culture.

Over the next few days ArtObserved will be collecting opinions and scenes from the fair and its surroundings: stay tuned here for coverage along with ArtObserved’s twitter page for instant updates throughout the days.

This entry was posted on Tuesday, December 1st, 2009 at 6:07 pm and is filed under Art News. You can follow any responses to this entry through the RSS 2.0 feed. You can leave a response, or trackback from your own site.