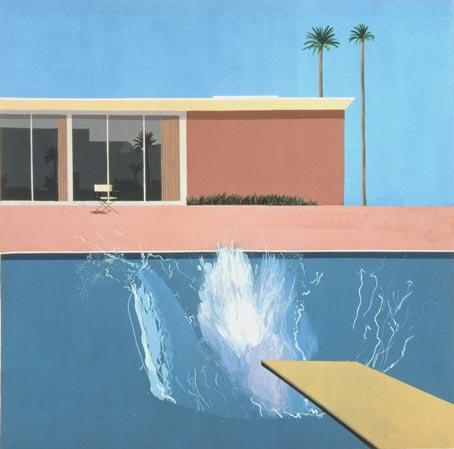 David Hockney’s iconic painting “A Bigger Splash” (1967), is at the heart of the exhibition. Via Nottingham Contemporary.

Currently showing at the newly opened Nottingham Contemporary art space in the UK is a major exhibition of work by artist David Hockney. Over 60 works by the artist– including paintings, etchings and drawings, are on show from national and international museum collections for the museum’s inaugural exhibit, which focuses on re-examining the work that the artist produced while living in London and Los Angeles during the years 1960 to 1968.  At the beginning of the 1960’s, Hockney was only in his mid-twenties and had already become one of the most critically acclaimed contemporary artists in Britain, building a national reputation for his distinctive, versatile art that was at once spontaneous, full of allusion and bold for its open references to homosexuality. Themes of the conventional yet “glamorous” California life abound in his work– particularly in his paintings of iconic glistening poolscapes and pristine lawns from the 1960’s, which evoke subliminal messages about society. Although Hockney has rejected the label of being a “Pop” artist, many of his works contain references to popular culture and draw inspiration from graffiti, magazine images, films and photographs, while also containing subtle indications of humor.  “1960-1968, A Marriage of Styles,” marks the first time that Hockney’s early work has been amassed in a collection since the Whitechapel Gallery retrospective of 1970.

David Hockney, “Life Painting for a Diploma,” (1962) Via Guardian 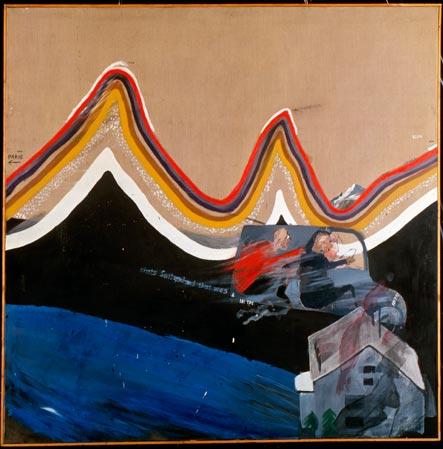 David Hockney “Flight Into Italy–Swiss Landscape” (1962) Via Nottingham Contemporary. Hockney stood out at the Royal College in London for his primitive style and use of bright colors. 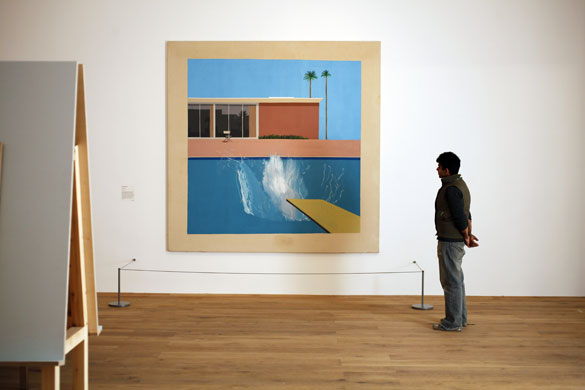 A viewer stands in front of Hockney’s “A Bigger Splash” (1967). Via Guardian. In the 1960’s Hockney created a series of what have now become iconic swimming pool paintings, based on pools in Los Angeles. The wave in “A Bigger Splash,” above, reportedly took the artist two weeks to paint.

The work comprising the exhibition is borrowed principally from the Tate and British Council collections, along with several international loans and one work from a private collector, which has never been exhibited before. Together, the collection speaks volumes regarding Hockney’s inspirations, thematic focuses and varied approaches towards the actual production of art–from oil and etchings to acrylic and colored crayons. His work from the 1960’s is predominately inspired by “places he was visiting, people he desired, and lifestyles he aspired to…” 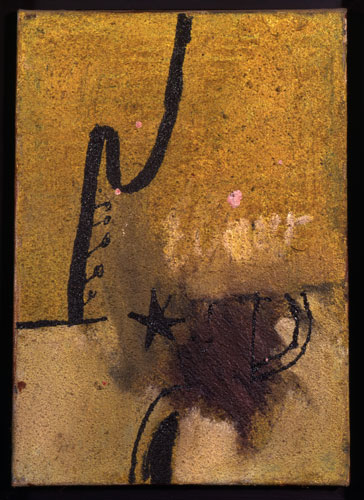 David Hockney’s “Queer,” (1960), demonstrates the artists personal exploration of his own homosexuality. Via Guardian 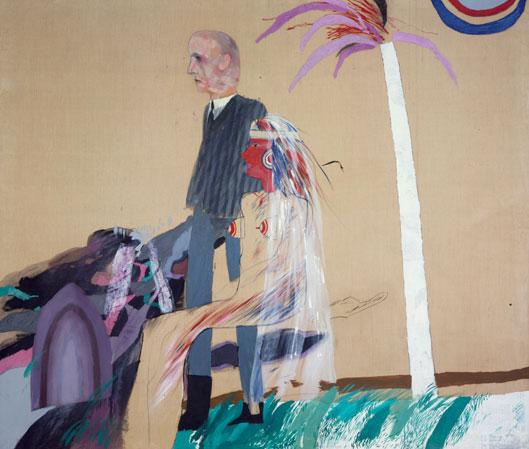 David Hockney “A First Marriage (Marriage of Styles I)” (1962) Via Nottingham Contemporary.

Born in 1937 in Bradford, England, Hockney is considered one of the most influential British artists of the twentieth centuries. He attended the Royal College of Art in London and quickly gained attention through his avant-garde artwork, which embraced a figurative quality during a time when abstraction was the predominant trend. His strong personality– curious, experimental and gregarious–combined with his “Yorkshire accent, bleached blond hair, owlish glasses and frank homosexuality” helped the artist stand apart from the crowd.  Hockney worked in a variety of fields– as a painter, draughtsman, print maker, photographer and designer, and experimented with a multitude of different styles. He has been credited as being a critical forerunner in what would later become known as Postmodernism. 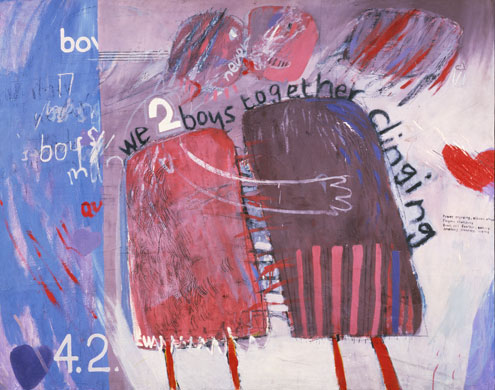 David Hockney, “We Two Boys Together Clinging,” (1961) Via Guardian. Hockney has been described as having a deliberately “rudimentary” and “rough” style. 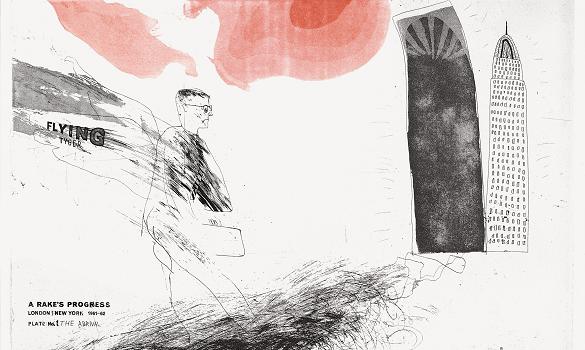 David Hockney, “The Arrival from A Rake’s Progress” (from a portfolio of 16 prints 1961-63). Via TimesOnline 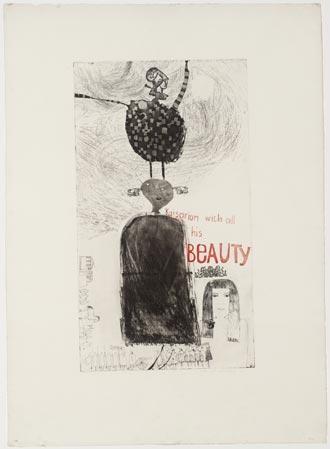 David Hockney “Kaisarion and all His Beauty” (1961) Via Nottingham Contemporary

The exhibit is curated by Nottingham Contemporary Directory Alex Farquharson, who has stated that  ‘Hockney, in this period, was at the crest of a wave, not only in the artistic avant-garde but in culture in general. It is a fascinating trajectory, from his first idiosyncratic takes on abstraction in 1960 to his unforgettable representations of southern California several years on. Allusions to this work abound in art today– in the work of Elizabeth Peyton, Jack Pierson, and Frances Stark, to cite just three important examples. It feels absolutely the right time to be revisiting this work now (ArtNewspaper).” 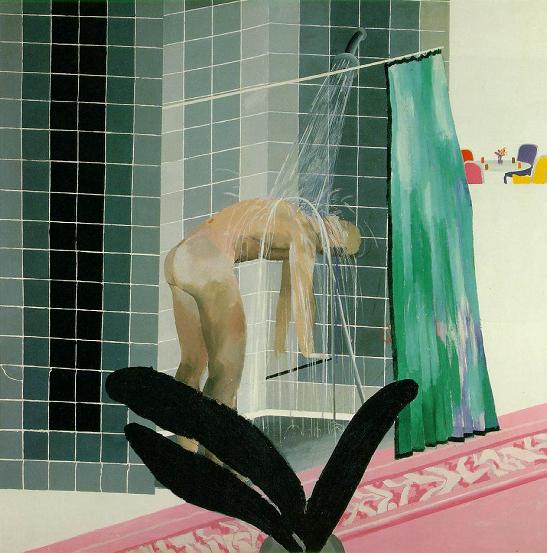 David Hockney, “Man in Shower in Beverly Hills” (1964) Via Art in the Picture. In the mid 1960’s Hockney developed a style that combined abstraction with a kind of naturalism.

Nottingham Contemporary, which opened November 14th, 2009,  is an unusual new space for art in the UK, and one of the largest– with four galleries, a subterranean auditorium, an education space and a study center. Designed by the award winning architects Caruso St John, the space is “elegantly landscaped” into a hillside with a gold aluminum and black marbled exterior. Caruso St John were selected to design Nottigham’s new center for Contemporary Art through an international competition in 2004. 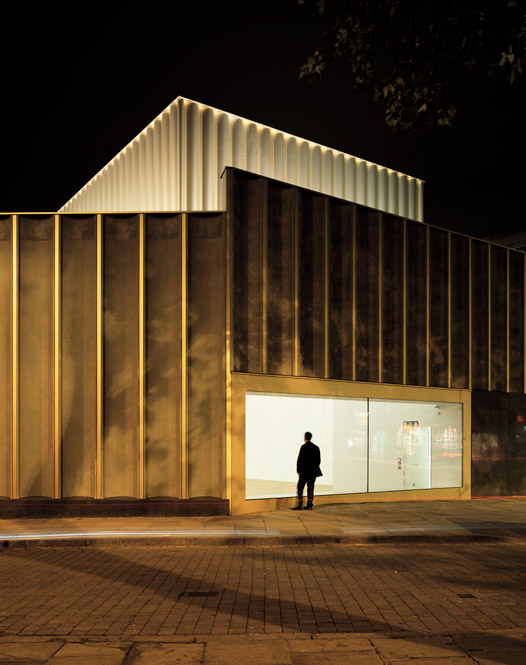 This entry was posted on Sunday, December 6th, 2009 at 5:38 pm and is filed under Go See. You can follow any responses to this entry through the RSS 2.0 feed. You can leave a response, or trackback from your own site.