Currently on view in Rome at the Palazzo delle Esposizioni, through February 14, is a complete retrospective on Alexander Calder (1898-1976) that surpasses any show dedicated to the artist in Italy during the past three decades. Running concurrently with the Gagosian Gallery’s exhibition Monumental Sculpture (through January 30) and borrowing works from the Museum of Modern Art, Foundation Solomon R. Guggenheim, Whitney Museum of American Art, National Gallery of Art, Center Pompidou and Calder Foundation collections, the exhibition pays tribute to the American master’s legacy, framing him chronologically through more than 150 works. Alongside the artist’s highly recognizable, deftly engineered wire mobiles and sculptures are lesser-known works, including installations, toys and paintings circa 1930, to provide theoretical counterpoints and pivot points in his career. 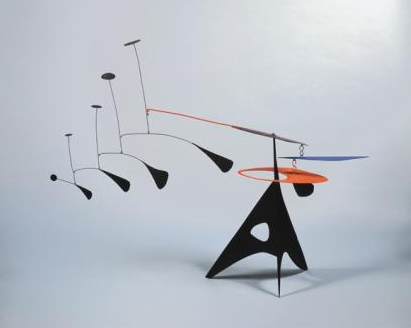 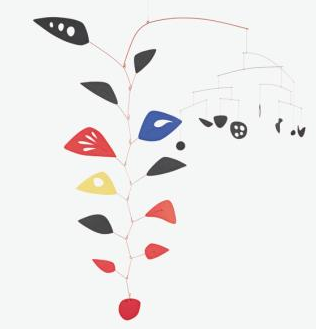 Tracing Calder’s aesthetic formation from the early nineteen twenties, the retrospective offers a look at lesser-known paintings and drawings completed at the New York Students League and maps his radical departure from traditional means made shortly after his formative move to Paris in 1926. After exposure to the Parisian avant-garde, including Duchamp, Léger, Miró and Mondrian, Calder turned to venerating abstract forms and his first foray into wire molding. From this period, he produced dynamic portraits of circus animals and popular culture figures.

Romulus and Remus (1928) by Alexander Calder via Palazzo delle Esposizioni

The early nineteen thirties witnessed Calder’s diversions into various media and styles, including a fascination with biomorphic forms and flirtation with Surrealist painting. These investigations, utilizing gouache, metal and bronze, permitted the artist to “play with naïveté,” resulting in works such as the rarely exhibited Chat (1930). 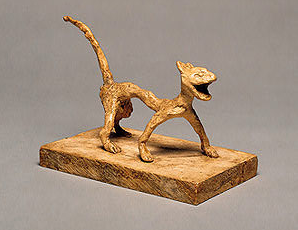 Following soon after,  Calder began sophisticated experiments in the manipulation of wire, which offered him the optimum means of expression. As a medium he could “twist, or break, or bend,” wire allowed for the artist to draw three-dimensional forms in space. Indulging in the purity of the abstract shape through delicate wire configurations, Calder produced sculptures, such as Object with Red Ball (1931), to which we attribute an unmatched degree of formal elegance and execution. 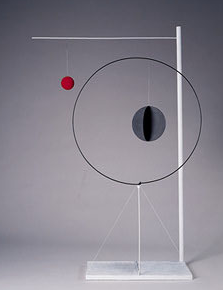 Object with Red Ball (1931) by Alexander Calder via Calder Foundation

Layering the principles of motion and amplitude in his mobile experiments, Calder began to use motors and cranks in his work. His resulting “mobiles” involved a rhythmical component and reconfigured negative space in an unprecedented way. Integrating balance and gravity, these works activate their surrounding space and context so that the final composition is left determined by the spectator, defined by his or angle on the object and its degree of rotation. 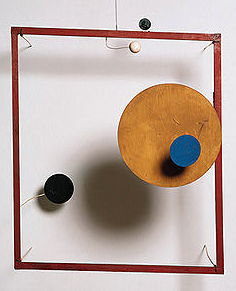 In a counter-proposal to Calder’s revolution in moving sculpture, Jean Arp introduced the notion of static stability. This idea spawned the so-called “stabile” pieces, including hanging furniture as well as the relatively obscure but important Small Sphere and Heavy Sphere of 1932, which blur the lines between sculpture and creative recycling.

Pittsburgh (1958) which is featured in the exhibition in Rome, by Alexander Calder via Pittsburgh International Airport

A centerpiece of the retrospective, the formidable, eight-meter-tall “Pittsburgh,” further demonstrates this exploitation of shifting contours and spatial relations. A symbol of the artist’s aesthetic apex, the mammoth aluminum and iron sculpture normally hangs over the heads of travelers in the Pittsburgh airport, its wheel spinning in continual, suspended motion.

Reinterpreting conventional motifs of line and negative space, Calder’s ambiguous paintings and mobiles forge an unusual, beautiful harmony between the whimsical and austere, with a steady focus on the changing nature of form. 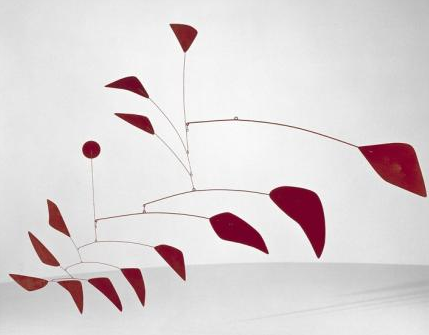 Big Red (1959) by Alexander Calder via the Palazzo delle Esposizioni 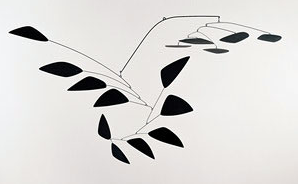 The Y (1960) by Alexander Calder via Calder Foundation 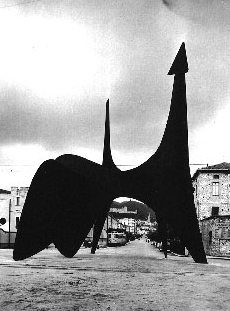 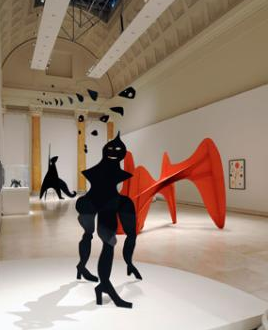 Critter without Arms (1974) by Alexander Calder via Palazzo delle Esposizioni

This entry was posted on Tuesday, December 15th, 2009 at 6:59 pm and is filed under Go See. You can follow any responses to this entry through the RSS 2.0 feed. You can leave a response, or trackback from your own site.