Chris Ofili’s familiar hits are brought together with his more mature recent works for the first time in a mid-career survey at the Tate Britain, London, through 16 May 2010. The collective effect of the show is a kaleidoscope of wild humor, brilliant color and raw energy. What is striking about the exhibition is its unique position within the growing contemporary canon: firstly, Ofili is unusual as a painter in a conceptual era, and, secondly, he is intensely concerned with the aesthetic. The paintings in this exhibition are richly ornamented; their surfaces are imaginatively constructed from such incongruous materials as elephant dung (Ofili’s signature), map pins and glitter. The paintings are structural and highly tactile, and the viewing experience is a sensory event. This perhaps most evident in The Upper Room, a collaboration with the architect David Adjaye to design an independent and enclosed viewing space. The audience is guided down a barely lit corridor into a dim, yet glittering chamber that enhances the spiritually of viewing paintings which reference both the Christian and Hindu faiths.

The aesthetic quality of all of Ofili’s work belies its interesting social, political and cultural commentary. For instance, on of the highlights is the arresting painting The Holy Virgin Mary. In the 1990s this piece bore the brunt of huge controversy sparked by Saatchi’s ‘Sensation’ exhibition held at the Royal Academy, London, and the Brooklyn Museum, New York, because of its conflation of religious and pornographic imagery. On its visit to New York the city’s mayor, Rudy Giuliani, contemptuously denounced it as “sick” and “disgusting”. Even Hilary Clinton, running for Senate at the time, had her say; feeling it was “not appropriate to punish” the Brooklyn Museum but nonetheless she found elements of the exhibit “deeply offensive” and announced she did not intend seeing the show. 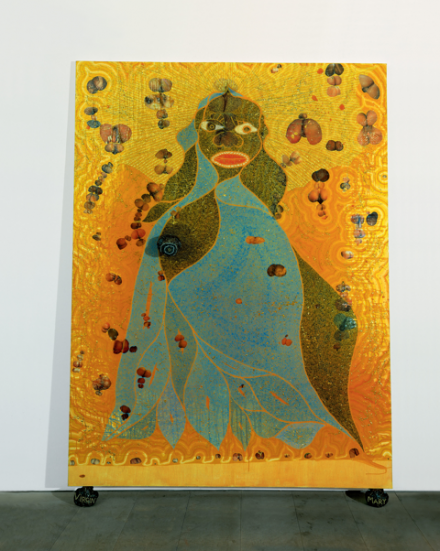 Though incessantly accused of being blasphemous, the painting The Holy Virgin Mary seems more appropriately related to the Early Modern visual language for portraying the Virgin as a woman both fertile and humble in Madonna Lactans and Virgin of Humility. Equally it exists within Yoruba tradition of representing female divinities with pointed breasts and open vaginas. What-is-more, the purportedly “obscene” collage of vaginas lifted from pornographic magazines can ostensibly be compared with the vulva triangle featured so prolifically in prehistoric cave paintings. The character of the African goddess is repeated throughout the exhibition; the central concern of such depictions being both beauty and pleasure, and moreover, the stereotypical sexualisation and exocistism of the black female. From Foxy Roxy in the earlier galleries to the Afromuses, a series of fictional gendered portraits portraying women with radiant, jewel-like lips, the black features are exaggerated to the level of parody.

The Adoration of Captain Shit and the Legend of the Black Stars, 1998 © Chris Ofili Courtesy Victoria Miro Gallery, London 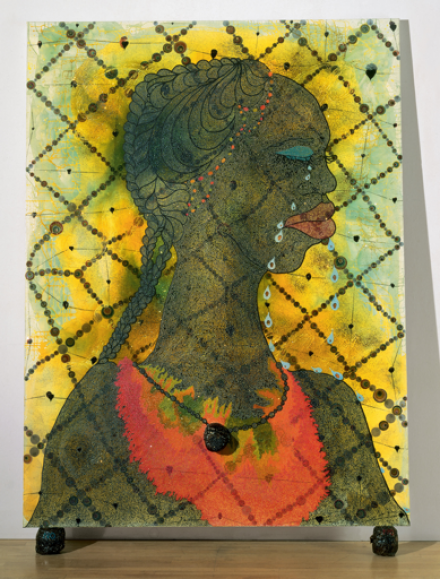 What is patent is that Ofili’s ethnicity is almost exclusively the genesis of his wide cobweb of influences. More specifically it is his position as Black and British. Thus Ofili draws on such disparate visual sources as William Blake’s The Four and Twenty Elders Casting their Crowns before the Divine Throne, in his 1995 piece 7 Bitches Tossing their Pussies Before the Divine Dung; and blaxploitation movies and marvel action heroes in The Adoration of Captain Shithead and the Legend of the Black Stars, 1998. Consequently, Ofili’s oeuvre can be viewed as a political statement on whether one can reconcile the collective notion of Britishness with Blackness. He said, of The Holy Virgin, “It’s about stereotyping… it’s about caricature… And it’s about just being confused. “ Its about the reconciliation of many cultures within oneself and within the black community in Britain. Ofili demonstrates his sincerity and serious message, nevertheless, in extremely poignant images such as No Woman, No Cry. The piece is a compassionate tribute to Doreen Lawrence, mother of Stephen Lawrence the victim of a racist murder in 1993, which exposed the institutional racism of the Metropolitan police. Collaged photographs of the victim are visible in the dignified tears of the grieving mother.

However, what is more than often underrated is Ofili’s humour – compounded by his macho, hip-hop, swaggering identity, recognisable in much of his earlier works. Though one could criticise his over-exploitation of his racial identity, as commentators did similarly with Basquiat, his sense of irony shines stronger. He surely cannot be accused of taking himself seriously? He uses black stereotypes, particularly, not in the hope we will believe them, nor deride them, more so we are aware of them. He is experimenting with his own brand of black cultural mythology that simultaneously satirises and celebrates. In ‘Pimpin’ Ain’t Easy’ Ofili portrays his experiences of the seedy nature of the Kings Cross area of London with cartoonish exuberance. The canvas is dominated by an eye-catching penile erection complete with self-mocking clowns face. Yet, the sneering male faces collaged in the surrounding canvas represent an ever-present sexual threat.

In Afrodizzia he appears to affiliate himself with the black community with hundreds of references to Pan-African heroes in the form of cut-outs of Nelson Mandela, Little Richard, Tito Jackson, Diana Ross, Shaft, and with the names of other great black personalities: Miles Davis, James Brown and Cassius Clay, written in map pins. The back of a figure observing the spectacle in the foreground of the painting is possibly Ofili himself – suggesting his affiliation with these heroes. Shaved into his hair are the letters R-E-S-P-E-C-T: ‘anthem of the Queen of Soul’, Aretha Franklin, a further celebration of retro stars and a nod at hip-hop culture.

Later Ofili moves away from the black-urban cultural references so influential in the 1990s to combining what he describes as: “old-fashioned ideas of paradise” with the notions of black liberation of the 1960s and 1970s evoked by the colors red, green and black of the pan-African union flag. These paintings are unusual within the contemporary scene Ofili is seemingly unique for his romanticized glorification of heterosexuality and love; portrays a black couple in an Edenic, intoxicating world of color and glitter, in for instance Afro Apparition. This is his idea of: Afro love and Afro unity. 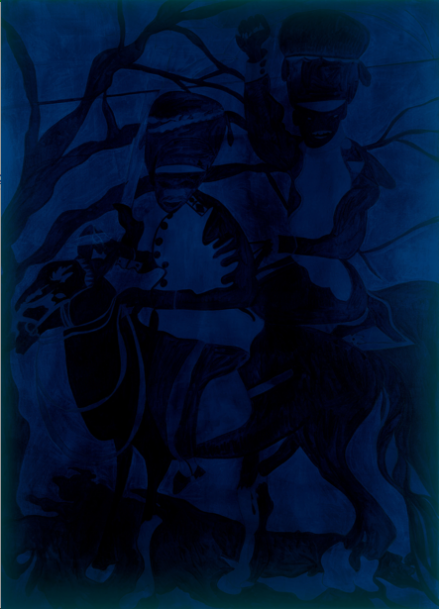 The last two rooms of the show cement this turn in Ofili’s tone. These are the focus of much of the media attention surrounding the exhibition. A lack of consensus is clear – do we like the “new” Ofili? The paintings are more subdued, less raucous than the earlier works. The Blue Rider paintings, particularly, are melancholic in their evocation of twilight or night through their strict use of blues and silvers, and not least by their dark themes. Potentially, these paintings mark a dangerous swerve in Ofili’s practice to upholding an almost Imperial notion of the exoticism and mysticism of Afro-Caribbean culture (certainly present in his earlier works but never taken so seriously). The change of pace was influenced by a visit, followed by a permanent move, to Trinidad. Here rather than being firmly rooted within the culture Ofili takes the perspective of outsider, potentially to his detriment. In this way the paintings are akin to Henri Rousseau’s in their somewhat misguided fantasies of a distant land. Nonetheless, the images, much as Rousseau, retain a compelling beauty on a grand scale. “Ofili…creates a sort of visual poetry with the expressiveness of a blues song whose actual sound one sometimes believes to be coming right out of the pictures” (Hilke Wagner, in Chris Ofili: The Blue Rider Extended Remix). 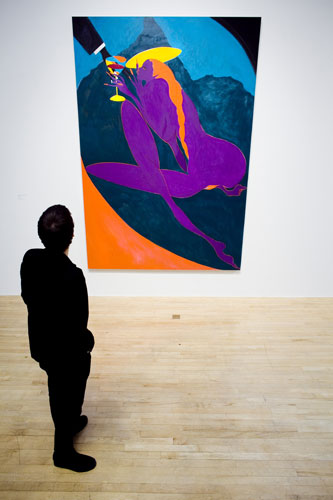 For fans of the earlier works the last room is more of a pattering out than a full stop. Despite their vibrant, acrid color they lack the vivacity and fun of our early favorites; nor do they appeal to our collective cultural experience. Yet one never continues their trendy, urbane posturing forever. Ofili has swapped his lime green Ford Capri for a four-by-four and we commend his efforts to evolve.

This entry was posted on Tuesday, February 9th, 2010 at 3:08 pm and is filed under AO On Site. You can follow any responses to this entry through the RSS 2.0 feed. You can leave a response, or trackback from your own site.