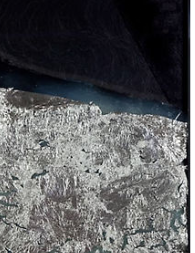 SEKU: Here at the Center of Pain is Radiance (2010), by Matthew Barney, via Sadie Coles

Djed: The Case for Saving Detroit (2010), by Matthew Barney, via Sadie Coles

KA: The River of No Return (2010) by Matthew Barney, via Sadie Coles

Many of the works are mythical and ritualistic in nature incorporating various alchemical materials such as gold plate, copper leaf and lapis lazuli pigment.  Barney has also used textual elements in these works as if signaling a way to bring about the story behind each. One for example, is a five-pointed polygon labeled “Five Points Make a Man,” a title which recalls the late performance artist James Lee Byars in his reference to Leonardo Da Vinci’s Vitruvian Man. 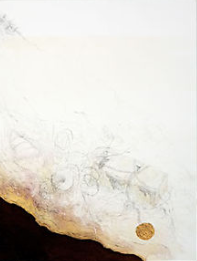 Storyboards for the Ancient Evenings project are also installed throughout the exhibition in seven freestanding cabinets. They feature photography, clipart, drawing and collage. Such a display technique alludes to the conceptual idea of a performance; the works appear to move while narrating a tale throughout the exhibition. At the same time the work within each cabinet reveals its own motif apart from the other works hence only hinting at the possibility of an overarching interrelationship. Barney recombines and then isolates particular objects in order to emphasize their physicality, connectedness and differences. 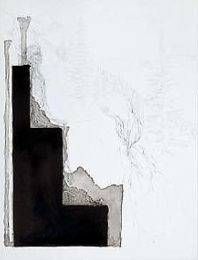 An exhibition which prompts meditate and contemplative thought, Barney’s new works link the past with the present.

Matthew Barney (b. 1967) studied art at Yale University. He has received several distinguished awards including the Aperto Prize at the 1993 Venice Biennale and the 1993 Hugo Boss award. His work has been shown in group and solo exhibitions in major international galleries and museums.

Tax change drives away donations of vehicles.(PAGE ONE)

The Washington Times (Washington, DC) January 31, 2005 Byline: Andrew Johnson, THE WASHINGTON TIMES Charities are bracing for a decline in vehicle donations this year in response to a change to federal tax regulations.

Under the change, which went into effect Jan. 1, taxpayers no longer are able to deduct the market value of a vehicle that they donate to charity. Instead, they must deduct the amount the organization receives from selling or auctioning the vehicle, which is often less than its market value.

Organizations such as Melwood, Goodwill Industries and the Salvation Army are hoping to make up for decreased revenue by increasing donation solicitation, opening new retail stores and educating the public about the change in the tax law.

Some organizations reported a surge in vehicle donations last month before the law took effect, and a dip this month. However, many say it is too soon to predict whether the decline will continue.

“It’s really too early for us to measure the impact of the law,” he said. Revenue from the Upper Marlboro organization’s vehicle-donation program, which has existed for nine years, accounts for about 15 percent of its budget.

Vehicle donations to the organization have dropped from 31 last January to 23 this year, Mr. Ficarra said.

“We’re experiencing a change,” he said. “We’re monitoring the numbers. I know we’ll certainly make it up with the new store openings.” Mark Loesberg, president of Capital Auto Auction in the District, which auctions off the vehicles donated to many local charities, estimates that car donations are down about 20 percent from a year ago. But, he said, January is typically a slow month for vehicle donations, because so many people give away their cars in December, before the end of the tax year.

He said he expects vehicle-donation programs to continue because they eliminate some of the hassles involved with selling a used vehicle.

The Salvation Army Adult Rehabilitation Center in Alexandria plans to increase public awareness about the changes in the tax law and add retail store locations this year, said Maj. William Madison, the administrator.

The center’s vehicle donation program, which accounts for a third of the organization’s budget, has received about half as many car donations as last January, he said, but “I don’t think it will continue.” He said he thinks the decline may be a result of misconceptions about the new law. Some people, he said, think they cannot claim any tax deduction at all from a vehicle donation.

This entry was posted on Tuesday, March 2nd, 2010 at 1:00 am and is filed under Go See. You can follow any responses to this entry through the RSS 2.0 feed. You can leave a response, or trackback from your own site.