Go See-New York: William Kentridge’s Five Themes at the Museum of Modern Art Through May 17th 2010 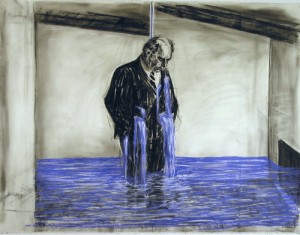 Drawing from Stereoscope (1998-1999) by William Kentridge, via The Museum of Modern Art

I believe that in the indeterminacy of drawing-the contingent way that images arrive in the work-lies some kind of model of how we live our lives. The activity of drawing is a way of trying to understand who we are and how we operate in the world.

Currently on view at the Museum of Modern Art in New York is “Five Themes” by William Kentridge (b.1955).  The exhibition features a comprehensive survey of the artist’s career highlighting more than 120 works made in a variety of mediums such as visual art, film, and  theater. Known for exploring social conflict in his work particularly that of his South African homeland, he often  questions themes of personal and cultural memory, oppression and reconciliation.  This exhibition underlines the inter-relatedness of Kentridge’s various mediums while exploring five themes  present in his work since the 1980s. 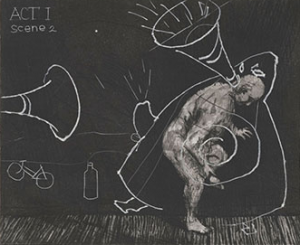 The show begins with two sections of anti-Apartheid works. Just after South Africa’s first democratic election in 1994, the country’s Truth and Reconciliation Commission convened hearings between perpetrators and victims of the apartheid. It was during this time that Kentridge created a body of work influenced by the impact of these testimonies. Working in a variety of media including etchings, large-scale drawings, film, and theater, each work features the character Ubu. Created by the French playwright Alfred Jarry in 1896, he symbolizes the desire for power and what happens to those turn against it. 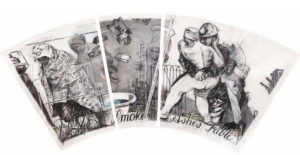 In the procession a group of figures appear weighed down by material possessions. A recurring motif in the artist’s oeuvre, it once again refers to the social conditions in South Africa and ideas of migration and displacement.

Walking Man (2000) by William Kentridge, via The Museum of Modern Art

“The figures in the procession and in Ubu Tells the Truth have a deliberate roughness (the result of tearing rather than cutting)… You are aware you are looking at crude, torn shapes but you cannot help seeing into them- a particular limp, a load on a head rather than a random shape,” wrote the artist. 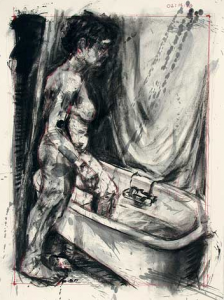 Untitled (Video Transfers) (2002) by William Kentridge, via The Museum of Modern Art

The exhibition also includes Kentridge’s most recent work which calls upon subjects such as the Enlightenment, colonialism, and post-revolutionary Russia as well as themes that stem from his own personal experience. Most recently he created The Nose, a full-scale opera which had its world premiere at The Metropolitan Opera in March 2010. 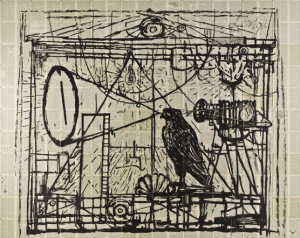 Learning the Flute (2003) by William Kenridge, via The Museum of Modern Art

The show was organized by Mark Rosenthal, an independent curator working closely with the artist for the San Francisco Museum of Art and the Norton Museum of Art in Florida where the it was held in 2009. The exhibition will travel next to international museums in Paris, Vienna, Jerusalem, Amsterdam, and Vancouver. The MOMA’s presentation has been enlarged due to the use of the great collection of Kentridge’s work already at the museum.

William Kentridge was born in 1955 in Johannesburg of Lithuanian-Jewish descent. His parents were prominent lawyers who were involved in top civil rights and anti-apartheid causes. In University he studied politics and African Studies. It was during this time that he began participating in theatrical production which would soon influence his artistic career; he consistently experiments between visual art and the fields of film and theater often merging the two together in his creations.

This entry was posted on Friday, April 9th, 2010 at 11:19 am and is filed under Go See. You can follow any responses to this entry through the RSS 2.0 feed. You can leave a response, or trackback from your own site.