Cy Twombly is the first contemporary American artist to create a permanent work for the Louvre: a 3,750-square-foot painting on the ceiling of the Salle des Bronzes. A council of international experts selected Twombly to paint the mural for one the oldest and largest wings of the museum, in keeping with the Louvre’s commitment to incorporating modern art within its galleries. Along with Anselm Kiefer of Germany and Francois Morellet of France, Twombly is the third artist to paint a decorative work for the Louvre since 2007. 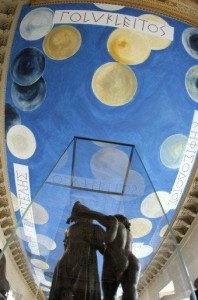 Twombly departs from characteristic scrawls and muted colors in order to complement the Greek and Roman bronzes. Twombly opts for simplicity, geometry, and classical homage. “I got into something new in old age,” says the artist of his deep blue ceiling. The elegant color, inspired by Renaissance painter Giotto’s use of lapis lazuli, serves as the background for floating discs bearing the names of various 4th century Greek sculptors. The ceiling’s boldness and simplicity adds allure to the immense, rectangular gallery while highlighting the ancient statuettes. At the March 23rd unveiling of the ceiling, Culture Minister Frederic Mitterand remarked that the organic and harmonic work reminded him of “the sea, allied with the sun.”

Although born in Lexington, Virginia, 81-year-old Twombly has lived in Italy since 1959. He visits Greece frequently and references mythology and classicism in his work. He completed the mural in pieces that were then affixed to ceiling, with assistance from fellow painters and funding from the Janet Wolfson de Botton Foundation and the Gagosian Gallery. Of the completed ceiling Twombly says, “I am very happy.”

This entry was posted on Friday, April 23rd, 2010 at 2:00 pm and is filed under Go See. You can follow any responses to this entry through the RSS 2.0 feed. You can leave a response, or trackback from your own site.