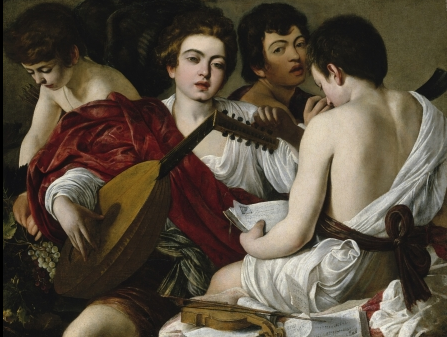 I Musici, 1595. All images via Scuderie del Quirinale

The Scuderie del Quirinale’s Caravaggio exhibition is one of several special events marking the 400th anniversary of this famous Italian artist’s death. Showcasing many of Caravaggio’s most representative paintings, the exhibition features works from prominent collections worldwide including the Metropolitan Museum of Art in New York, the Hermitage in St. Petersburg, Staatliche Museum in Berlin, and Italian institutions such as the Uffizi and Borghese Galleries. 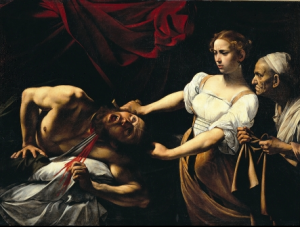 One of the strengths of this exhibition is its narrow focus. Rather than include works with ambiguous relationships to the Lombard master, the show exclusively features works unequivocally created by Caravaggio’s hand. Issues of attribution can therefore be set aside, while viewers are invited to familiarize themselves with the qualities that make Caravaggio one of the most innovative and influential artists in the trajectory of Western art. 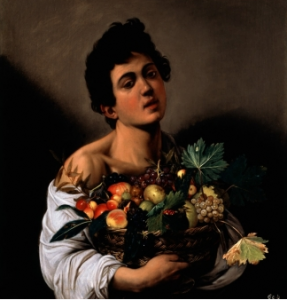 Caravaggio’s paintings are notable for their dramatic use of light and shadow. Paintings such as the National Gallery of Ireland’s Cattura di Cristo nell’orto (The Taking of Christ) and  Cena in Emmaus (Supper at Emmaus) from the National Gallery London exemplify the strong directional lighting used to highlight some areas while casting others into darkness.  This light conveys a theatrical sense of drama further supported by the emotionally charged gestures and facial expressions of the figures. 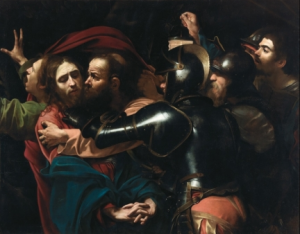 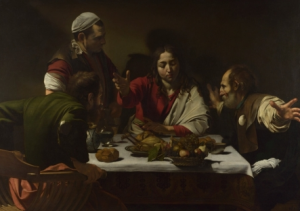 One of Caravaggio’s most notable contributions to later artists was his monumental treatment of the genre scene.  I bari (Card Sharps), on loan from the Kimbell Art Museum in Fort Worth, Texas, exemplifies Caravaggio’s penchant for depicting everyday low-life scenes on a large scale.  This work in particular represents a significant moment in Caravaggio’s career as it marked his debut on the art market around 1594 as an independent artist free of workshop affiliation. 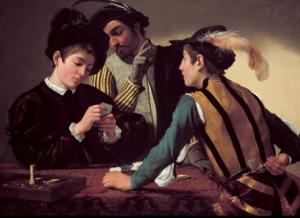 Michelangelo Merisi da Caravaggio (1571-1610) led a tumultuous life replete with scandals, bar scuffles, and encounters with the law.  The artist was trained in the Lombard region of Northern Italy, worked throughout Italy,  and achieved his greatest fame while taking residence in Rome.   Art critics of the 17th century onwards disparaged the art of Caravaggio and the Baroque era he subsequently inspired.  In the past 50 years renewed scholarly interest has greatly contributed to the reappraisal and positive recognition of Caravaggio and Baroque art.

This entry was posted on Tuesday, May 25th, 2010 at 1:00 am and is filed under Go See. You can follow any responses to this entry through the RSS 2.0 feed. You can leave a response, or trackback from your own site.