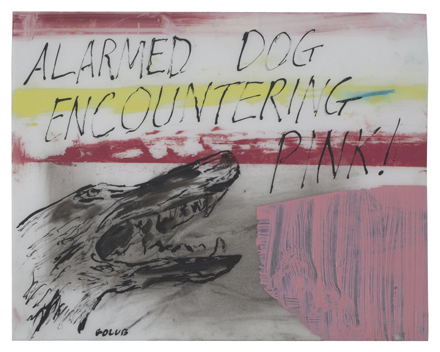 The current show at the Drawing Center in New York exhibits 43 drawings and works on paper by Leon Golub made between the years 1999 and his death in 2004. Golub is primarily known for his visceral large-scale paintings of war, torture, and the darker side of humanity. The drawings however, display a different side to Golub’s art making process, and reflect the range of his interests–satyrs, sex, animals, classical art, death, and graffiti all appear in these late drawings. 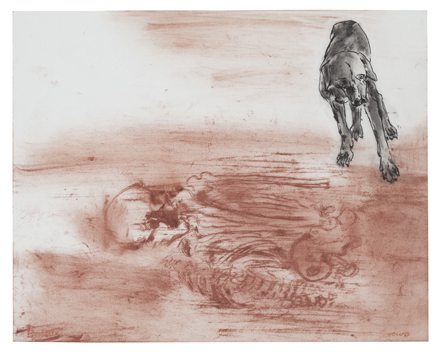 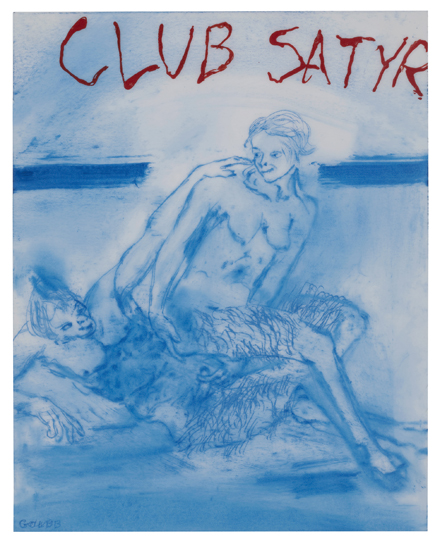 In his later years, it became increasingly difficult for Golub to paint on such a large scale, and beginning in 1997, he began to make many small scale drawings covering more personal subject matters. Golub’s painted works start with an under drawing in chalk or graphite, which he then covered with thick layers of paint. As a final step, Golub would tear away at the painted layers using a variety of implements to achieve a highly textured surface. The works on paper are made in a very different manner; as opposed to the building up of a thick surface, the works are made with oil stick and ink washes on 8 x 10 inch bristol board or vellum. Golub would often create the backgrounds for his drawings separately (examples of which are on display), and he would then add the subject matter at a much later date. Instead of adapting the rough, somewhat linear texture of his paintings to the works on paper, the drawings use an entirely different set of artistic actions of smears, drips, washes, and monochromatic linear elements with touches of highlights. 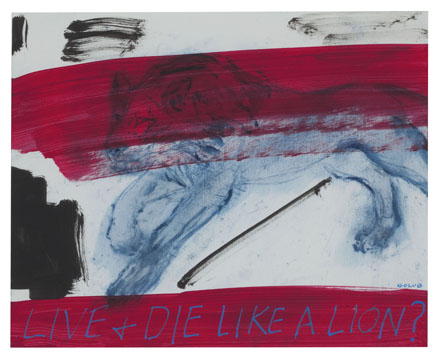 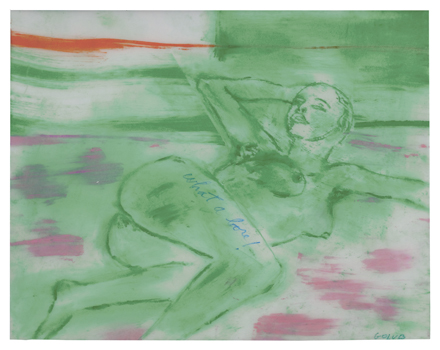 The process of creating the drawings essentially combine three disparate elements: the abstract background as a discrete visual element, the subject matter which is usually culled from Golub’s extensive collection of organized ephemera and magazine clippings (also on display in a vitrine), and finally, the title, which Golub usually took from snippets of overheard conversations, news headlines, or graffiti slogans. These aspects are then contextualized into playful, fragments of metaphorical scenes. It is this fragmented and indeterminate nature that prompts resolution through the use of metaphorical interpretation. For instance, A Sentimental Story (2003) depicts a dog set in a white ground. The addition of the title scrawled in large letters, colors our interpretation of the scene into the metaphoric realm–dog as companion, as loyalty, as hunter. As art historian Eduardo Cadava states in the catalogue essay, “…the dog tells us what is true of all of Golub’s figures: none of them are ever only themselves.” 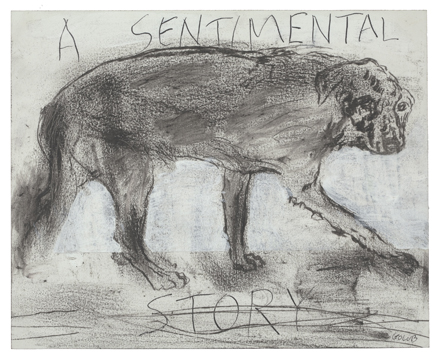 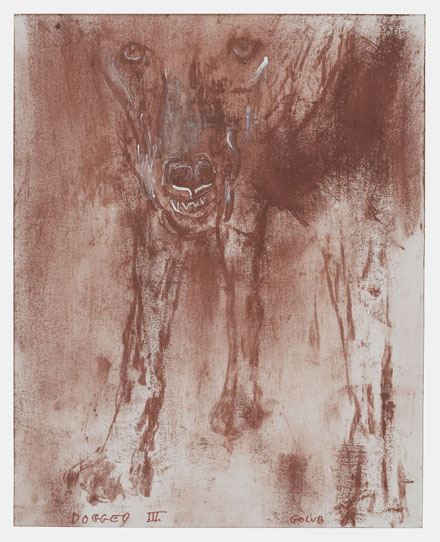 In addition to metaphorical interpretation, works like Gunman Caught in Red Abstraction! Situation Could be Serious! (2002), Post Modernist Bimbo (2002), and What a Bore! (2003) reflect Golub’s dry sense of humor about sex and art history. Other works show highly sexualized satyrs, and still others in the exhibit are about confronting death. Variants on each theme are on display as well, inviting open-ended interpretations. Brett Littman, curator of the exhibition, organized the works according to color as opposed to theme, which unites the works as group, as well as capitalizes on Golub’s unique color palette. 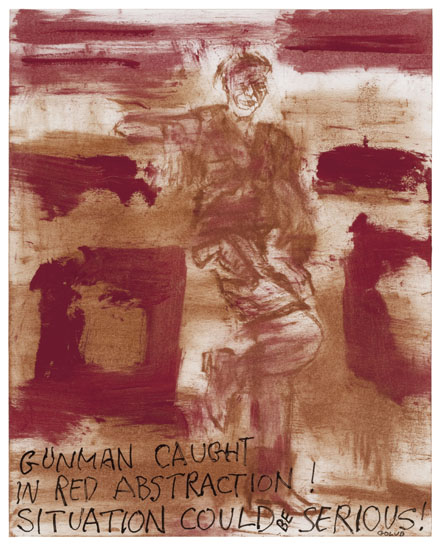 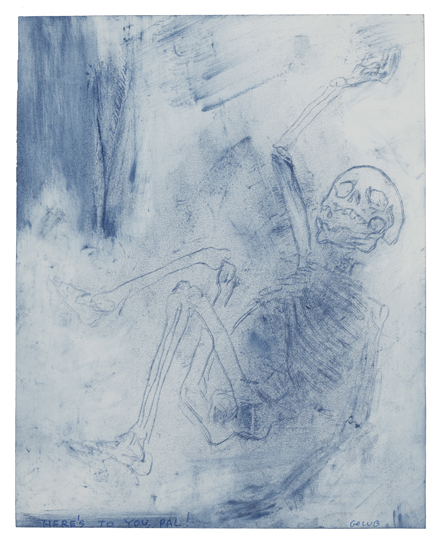 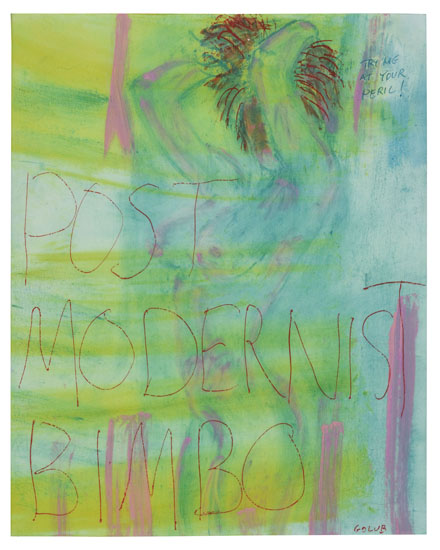 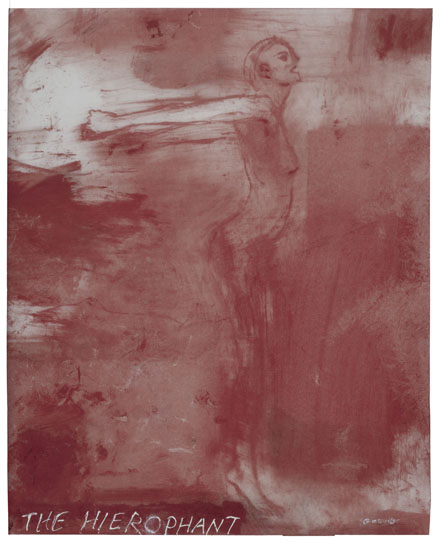 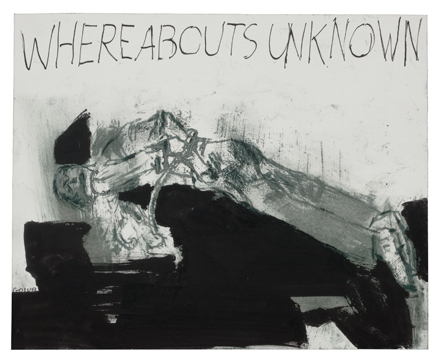 Leon Golub was born in Chicago in 1922 and studied art history at the University of Chicago. He later received an M.F.A. in 1950 from the School of the Art Institute of Chicago and married artist Nancy Spero in 1951. After a brief period of living in Paris with Spero in 1959, they moved back to New York in 1964 where he remained until the end of his life. The exhibition will travel to the Mary & Leigh Block Museum of Art at Northwestern University, Evanston, IL, and then to The Museum Her Domein, Sittard, Netherlands.

Parents of two use experience in tutoring biz

John Heese’s job with Chase bank brought the family here in 2007. Wendy’s interest in their daughters’ education combined with John’s desire to start his own business motivated the duo to look into franchise options.

“One of the reasons we bought with Huntington was they have very specific guidelines for what they expect from their franchisees,” Wendy Heese said. “Somebody invented the wheel. I didn’t want to reinvent it, I just want to keep it spinning successfully.” Wendy Heese said she stayed at home for nine years with the couple’s two daughters. However, during those years, she first volunteered and then worked as a preschool teacher’s aide at their schools.

“We wanted something that was geared toward Wendy because when we opened I was still working at the bank.” John Heese said.

The couple considered day care for their daughters Kaisee, 11 and Kayte, 7. But, at that point, “we felt comfortable that the business could support us,” Wendy Heese said.

“I discovered that as I work with the kids more, I really enjoy teaching.” he said.

Lisa Bellah enrolled her son Dylan at Huntington in January.

“My husband and I noticed that he was just struggling,” she said.

Dylan is in fifth grade and goes in four times a week to receive individualized instruction. He recently mastered counting money and seemed excited about it. “Before, I wasn’t sure how to count it and I had to ask,” he said. “The teachers are nice.” “I hope when he is all finished, he’ll want to go to math class in sixth grade,” his mom said. “I want him to have the self- confidence to tackle anything that’s put in front of him.” Students are tutored in the basics: reading, writing, math, spelling, phonics and study skills. The center staff also offers exam preparation for the SAT and the ACT.

“Initially when parents call us they’re at their wit’s end,” Wendy Heese said. “We start them where they’re completely comfortable and then we build the skills that they need. Once the skills are in place, confidence follows. When you’re confident, you’re motivated to learn new things.” For the love of learning What: Huntington Learning Center.

Prices: Prices vary and are based on each student’s needs.

This entry was posted on Tuesday, June 1st, 2010 at 1:00 am and is filed under Go See. You can follow any responses to this entry through the RSS 2.0 feed. You can leave a response, or trackback from your own site.