Go See – Athens: Louise Bourgeois at the Museum of Cycladic Art through September 12, 2010 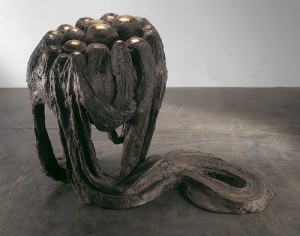 Currently on view at the Museum of Cycladic Art in Athens, Greece is an exhibition featuring the work of late artist Louise Bourgeois (1911-2010). The exhibit highlights a body of the artists sculptural work known as the “Personages,” which Bourgeois produced between 1947 and 1953. These totem-like objects have Surrealist origins, and explore the subconscious human sentiments of anger, sexuality, fear and suffering. Eight of these “Personages” are displayed alongside the artist’s most recent series of gouaches. 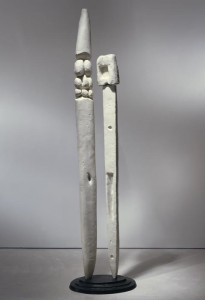 Listening One (1947) by Louise Bourgeois, via Tate Modern

Also featured in this exhibition is Avenza Revisited II (1968-1969), one of the artist’s most acclaimed works. It belongs to a group of sculpture which Bourgeois described as representing an “anthropomorphic” landscape. The series was likely inspired by Avenza, an area in Carrara, Italy renowned for its marble quarries, where the artist spent a period of time working in stone. The Carrara quarries are perhaps best known as the preferred marble source of Michelangelo and other Renaissance masters. Bourgeois’ creation thus refers to both the rich geology and art-historical significance of the region, in which she herself was a participant. 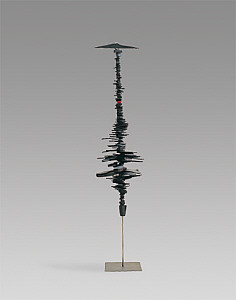 Femme Volage (1951) by Louise Bourgeois, via The Guggenheim

The tall, slender, life-size sculptures known as the “Personages” represent individuals, couples, or groups.  According to the artist, “My work grows from the duel between the isolated individual and the shared awareness of the group.” Bourgeois originally explored these forms in wood, later translating them into bronze. 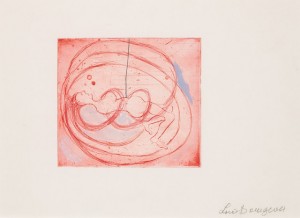 Spiral Woman (2006) by Louise Bourgeois, via The Whitney

The series of red gouaches on view also investigate issues of interpersonal relationships, but with an emphasis on family, pregnancy and child rearing. Made with soft blood red paint which, a substance simultaneously physical and ethereal, these delicate works depict the stages of motherhood from conception and pregnancy to birth and childhood. 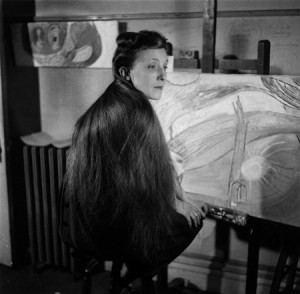 Louise Bourgeois (1911-2010) was born in 1911 and studied at the Ecole de Louvre and in the private atelier of Fernand Leger. In 1983 she married the American art historian Robert Goldwater and moved to New York City. A retrospective of her work at the Museum of Modern Art in New York in 1982 brought her international recognition. In 2007, a traveling retrospective of her work was exhibited at the Tate Modern in London, the Centre Pompidou in Paris, the the Guggenheim Museum in New York, the Museum of Contemporary Art in Los Angeles and the Hirschorn Museum in Washington, D.C.. Bourgeois lived and worked in New York City until her death on May 31st, 2010.

This entry was posted on Saturday, August 7th, 2010 at 1:00 am and is filed under Go See. You can follow any responses to this entry through the RSS 2.0 feed. You can leave a response, or trackback from your own site.