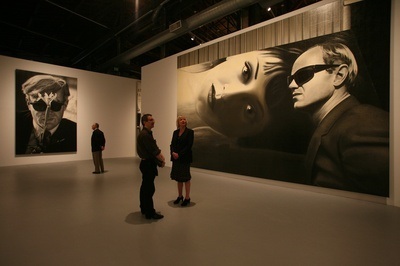 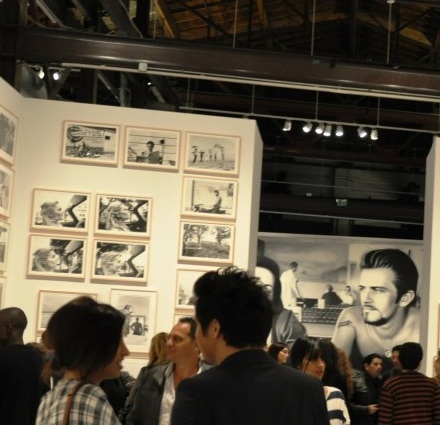 ‘Dennis Hopper Double Standard,’ a comprehensive survey of artwork by the late cultural icon, is currently on view at the Museum of Contemporary Art, Los Angeles. The exhibition explores an interdisciplinary body of creative work produced by actor, director, photographer, painter, sculptor, and conceptual artist Dennis Hopper, over the course of his prolific sixty-year career. More than two hundred objects crafted in a variety of media are on view, including a rare early painting completed in 1955, before to the loss of the artist’s studio and much of his work in the 1961 Bel Air fire. Curated by artist Julian Schnabel, ‘Dennis Hopper Double Standard’ is the inaugural exhibition of the museum’s new director, former New York gallerist Jeffrey Deitch. Prior to his death in May of this year, from complications related to prostate cancer, Hopper also played a significant role in the organization of the exhibit. 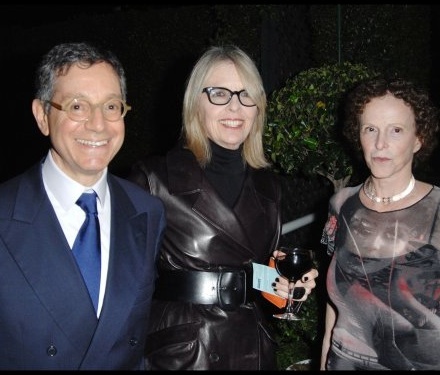 The exhibition represents Hopper’s life-long engagement with American visual culture, tracing his artistic development from the photographs, sculptures, and assemblages created in the 1960’s, through painting and graffiti-inspired wall constructions produced in the 1980’s and 90’s, and large-scale billboards, film installations, and sculptural work from the last ten years of his life.  The works on view reflect the hybridity of Hopper’s stylistic interests, including abstraction, the ready-made, pop, and conceptual and performance art, illustrating his enduring fascination with the dialogue between popular and progressive culture. 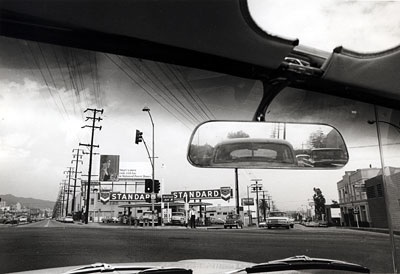 The title of the exhibition is borrowed from Hopper’s celebrated ‘Double Standard’ photograph of 1961. The image depicts the two Standard Oil signs located at the intersection of Santa Monica Boulevard, Melrose Avenue and North Doheny Drive on historic Route 66 in Los Angeles, captured through the windshield of a car. The picture was selected by then-emerging artist Ed Ruscha, a close friend of Hopper, to serve as the invitation to Rucha’s solo exhibition at Ferus Gallery in 1964.

This personal anecdote, and its reference in the exhibition’s title, reflect the significance of Hopper’s enduring interdisciplinary collaborations, and the cultural impact of an artistic community which he was instrumental in creating. Schnabel describes Hopper as “A painter without a brush,” suggesting that his artistry does not reside exclusively in the realm of material production. Rather, he proposes that Hopper’s achievements be characterized as a spectrum across which art-objects, visual culture, and social context are synthesized through his particular creative agency. This aspect of the exhibition’s premise has raised questions about the extent to which Hopper can be considered a ‘fine’ artist, and about the increasingly problematic use of that term in a multimedia age. Critics have also challenged the curatorial assertion that Hopper’s success and visibility as an actor were the product of his personal creativity and novel artistic approach, rather than a convenient platform from which to access an elite social milieu. The show’s title suggests that Hopper’s complete body of work has been under-appreciated as the result of a cultural double-standard applied to his daring conflation of Hollywood celebrity with legitimate artistic persona.

The exhibition attempts to address the complexity of Hopper’s artistic accomplishments, while acknowledging and endorsing his popular celebrity. Many of Hopper’s friends, some of them the subjects of the works on view, appeared at the opening to celebrate his life and mourn his passing. Ed Ruscha’s son, Eddie Ruscha, acted as DJ for the event, attended by a large, high-profile crowd. A dinner co-hosted by Jeffrey Deitch and hotelier Andre Balazs at the Standard Downtown followed the opening, where guests included Ed Ruscha, Billy M. Bengston, Julian Schnabel, Fred Hoffman, Tony Shafrazi, Diane Keaton, and Liv Tyler. 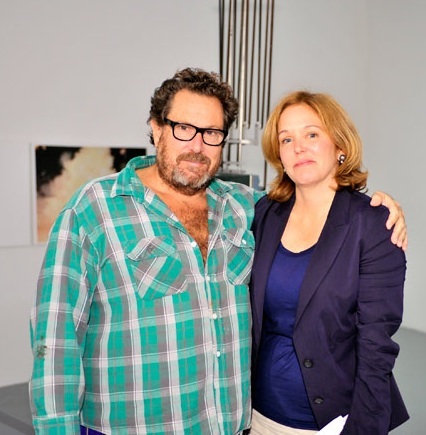 Julian Schnabel and Marin Hopper at the Opening of ‘Dennis Hopper Double Standard’ on July 10th, 2010, courtesy of The Daily Beast. 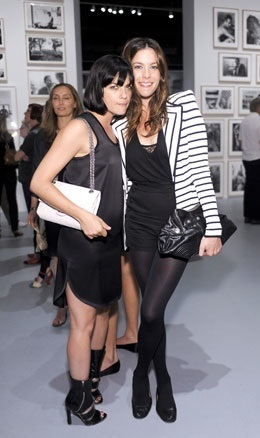 Selma Blair and Liv Tyler at the Opening of ‘Dennis Hopper Double Standard’ on July 10th, 2010, courtesy of The Daily Beast.

The first section of the show features the artist’s early sculpture and assemblages, as well as photographs documenting the development of progressive pop-art culture in the 1960’s, taken both in Los Angeles and New York. Hopper’s work from this period captures the quintessential visual experience of the two cities during that time: the billboards, automobile culture, and changing American landscape. Hopper was instrumental in introducing the imagery of Los Angeles’ graffiti and gang paintings into the conventional, fine-art culture of the gallery.  In this series he creates a dialogue between the abstract expressionist style then popular among his contemporaries, and the visual forms of L.A. street culture. 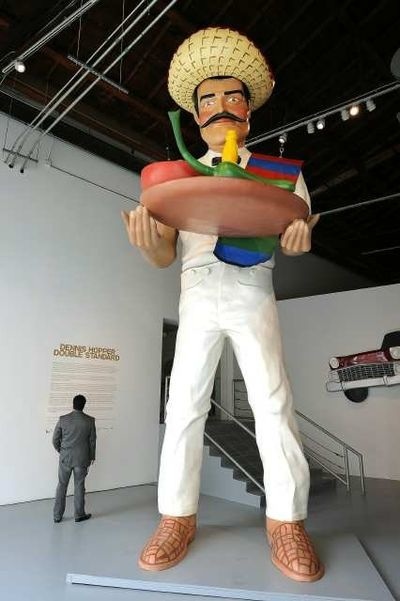 Also included in this section are two thirty-foot-tall sculptural works: “La Salsa Man,” and “Mobil Man,” re-cast and reconfigured from a purchased mold under the the artist’s instruction, as an homage to the contemporary roadside aesthetic that inspired them. These were originally characterized as “found art” or “ready-mades,” and shown alongside the work of Dada master Marcel Duchamp, with whom Hopper collaborated in 1963.  The result of this collaboration is “Hotel Sign,” a sculptural work also on view in the current exhibition. 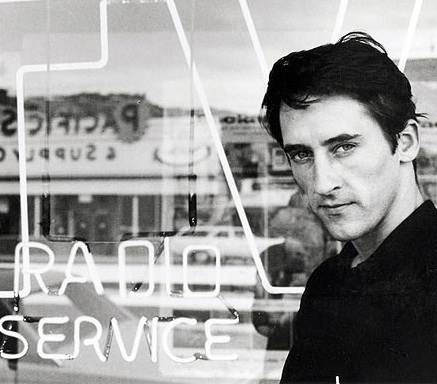 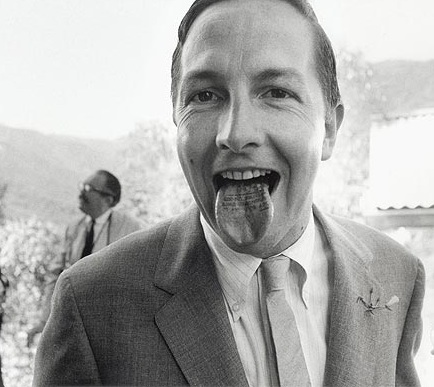 Hopper’s photographs, widely regarded as the highlight of the exhibition, are hung salon-style, floor to ceiling.  They document his interpersonal relationships, social environment, and the shifting cultural climate of 1960’s Los Angeles.  The series includes images of the civil rights march on Selma, early pop-art exhibitions in Los Angeles, anecdotal scenes captured on-set in Hollywood, and his more recent fascination with abstract street art in Venice, California. They reveal an attentive and curious eye, the artist’s keen and often ironic sense of humor, and fascination with the lived experience of historical events.

The second section of ‘Dennis Hopper Double Standard’ features a series of paintings from the eighties and nineties, inspired by graffiti-covered walls and the urban landscape of Los Angeles. This grouping also includes Hopper’s set-like wall constructions, monumental billboard paintings from the early twenty-first century and, a more recent series of abstract landscape photographs.

The third and final section consists of a series of film instillations highlighting Hopper’s career as a director and actor. His directorial credits include Easy Rider (1969), The Last Movie (1971) and Colors (1988). He appeared as an actor in over 200 films, including American classics Rebel Without a Cause (1955), Giant (1956), Cool Hand Luke (1967), Apocalypse Now (1979), Blue Velvet (1986), Speed (1994), and Basquiat (1996). Through his work in film, Hopper met Tony Shafrazi, who would eventually become his art dealer, and who was also instrumental in the realization of this exhibition.

The show’s curator has cited Hopper as a major force by which the status of film as an expressive medium was successfully elevated to fine art, and as an important source of inspiration for his own substantial body of work. Despite the controversy surrounding the pretext and content of ‘Dennis Hopper Double Standard’, it is widely regarded as both a celebration of the artist’s life and a testament to his cultural legacy. Criticizing the extent to which the exhibition succeeds in qualifying Hopper as a legitimate ‘artist’ is arguably limiting; while visionary masterpieces like Easy Rider will endure the undulations of contemporary taste, it is a bold and worthy endeavor to address those aspects of any artist’s body of work which may fall uncomfortably outside the realm of quantifiable material production.

-S. Humphrey and A. Goldberg

Groupon, a shopping website that offers a daily deal on local goods, services and cultural events, launched in Columbia, Mo., on Jan. 24.

“Home to the University of Missouri and a center of art and culture, Columbia is an ideal Groupon market,” said Rob Solomon, president and chief operating officer of Groupon, in a release. “We look forward to bringing students and residents unbeatable deals from top local businesses, while creating new revenue streams for area merchants.” in our site groupon sandiego

“Groupon brings buyers and sellers together in a fun and collaborative way,” said Solomon. “We offer the consumer a great deal they can’t get anywhere else and deliver the sales directly to the merchant.”

This entry was posted on Tuesday, August 10th, 2010 at 9:46 pm and is filed under Art News. You can follow any responses to this entry through the RSS 2.0 feed. You can leave a response, or trackback from your own site.