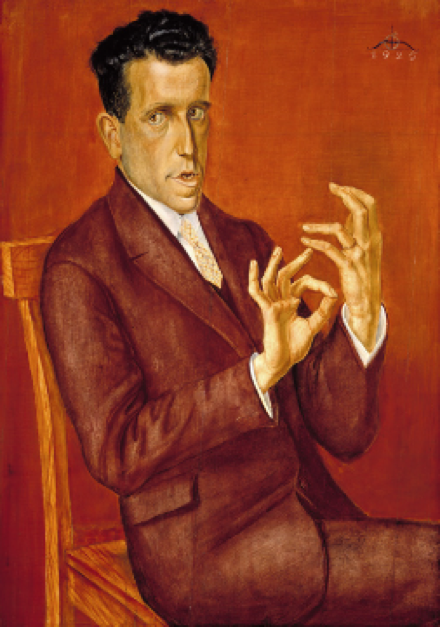 Currently on view at the Neue Galerie is an exhibition featuring the work of German artist, Otto Dix (1891-1969). The show was organized by Olaf Peters, Professor of Art History at Martin Luther University in Halle-Wittenberg, Germany. Following its run at Neue Galerie, the show will travel to the Montreal Museum of Fine Arts. The exhibition is the first solo museum show of Dix’s work in North America. Although widely regarded as one of the most important artists of the 20th century in Europe, Dix has been slower to attain widespread appreciation among American audiences. The 100 plus works featured in this exhibition, which include drawings and paintings, emphasize Dix’s ability to portray the often brutal realities of his time, with the cynicism and satire which characterized the “New Objectivity” movement. 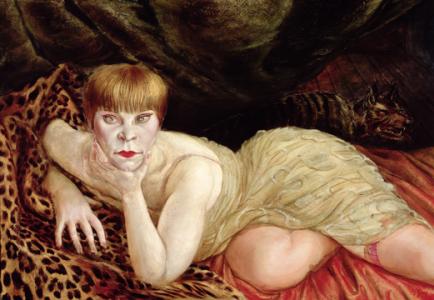 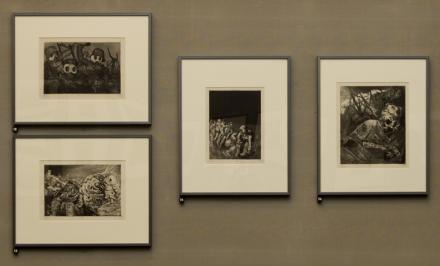 The exhibition is divided thematically and touches upon four major subjects of Dix’s ouevre: Word War One, Portraiture, Sexuality, and Religious and Allegorical paintings. The first room in the show delves into Dix’s experience on the battlefield during the first World War, and the subsequent impact that this on his art. This room includes Der Krieg (The War), a series of 50 etchings depicting the many horrors of warfare. These works, deeply indebted to Goya’s Disasters of War prints, are presented in a dimly lit room with a cave-like entrance. 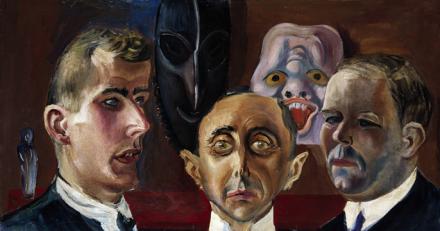 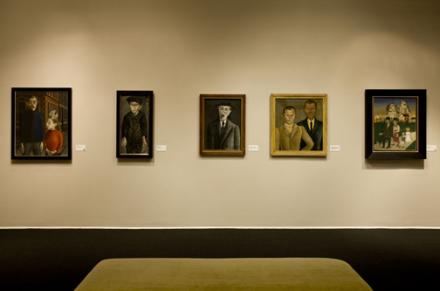 For all of Dix’s distortions of perspective, space, and the human figure, viewers to this exhibition will quickly appreciate the communicative power of his compositional choices, and his artfully deployed, poly-stylistic vocabulary. The Old Master flavor of works like St. Christopher IV (1939) illustrates Dix’s capacity to articulate naturalistic detail in his portrayals of the human body. Dix often emulated great German artists of the past like Lucas Cranach, Albrecht Dürer, and Hans Holbein, in both technique and composition. By working within this stylistic tradition, Dix inserted himself into the canon of German art and artists. He also used these styles to mask his critique of the Third Reich, which was quickly gaining power in Germany during the 1930s. 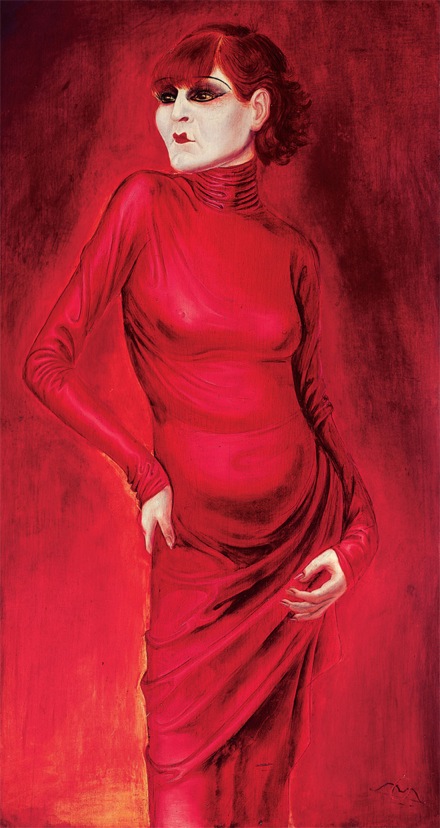 Dix’s potraits stand out among the highlights of this exhibition. The artist relied heavily on color to illustrate the personality of his sitters, and nowhere is this method more apparent than the striking portrait of Anita Berber. The dominance of the color red, slinky dress, dyed hair, heart shaped lips, and fiery background reference the dancer’s provocative character and turbulent life. Amid these bold, red hues, Anita Berber’s macabre visage stands out; her pasty white skin, pencil thin eyebrows, and puckered lips appear at once sinister, comical, and sympathetic. Though her heavily made-up face is aged and decayed, Berber was only in her 20s when she sat for Dix. 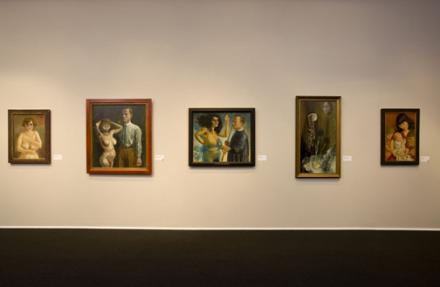 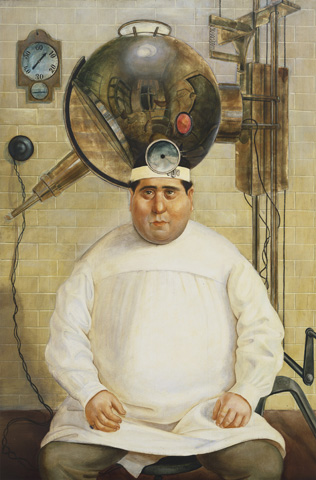 While Dix masterfully portrayed the atrocities of war and the lurid world of prostitution, he also painted scenes of familial life. More than one canvas on display depicts a mother cradling her newborn child. Although some of these works feature Dix’s characteristic distortions, there is a degree of tenderness that pervades the painting and surpasses their occasionally grotesque qualities. Dix also painted himself and his family in several self-portraits. The variation in the artist’s portrayals of himself and his loved ones reveals particular insight into Dix’s perception of his role in the world. 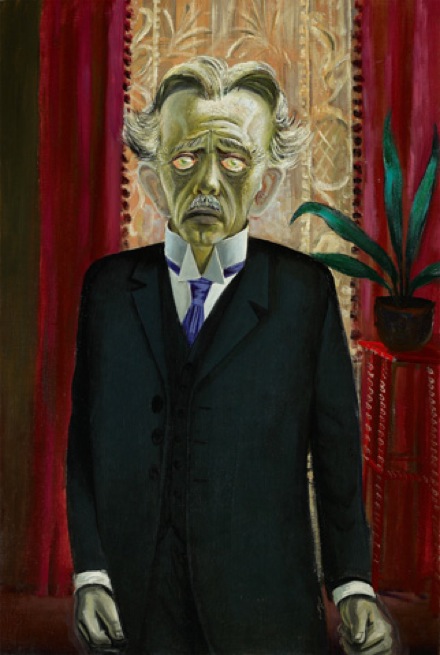 Otto Dix (1891-1969) was born in Untermhaus, Germany. Exposed to art from an early age, Dix attended the Dresden Academy of Arts starting in 1910. He voluntarily enlisted in the military following the outbreak of World War One. His war time experience had a profound effect on Dix psychologically and artistically. The 1920s and 1930s, the years of the Weimar Republic, are considered the most important period of Dix’s artistic career. In 1925 Dix contributed work to the Neue Sachlichkeit (New Objectivity) exhibition along with artists such as George Grosz and Max Beckmann. Dix was deemed a degenerate artist by the Nazi regime and, like all artists in the Reich, was forced to join the government’s Reich Chamber of Fine Arts. After being conscripted into the German militia in World War II, Dix was captured by the French army and was released after the war. He spent his remaining years in Dresden, painting mostly war-related subjects and religious allegories. 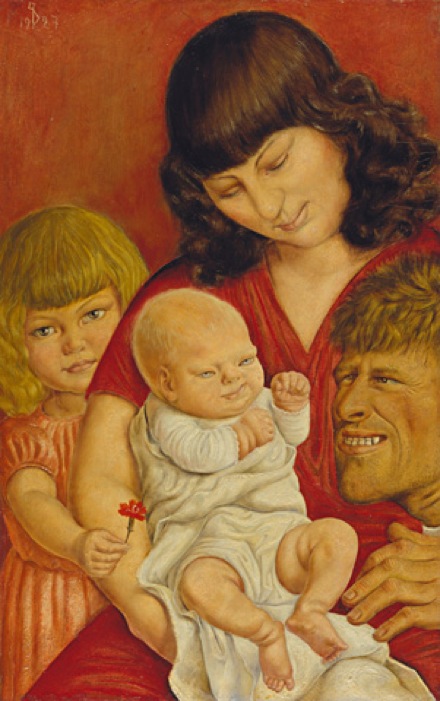 This entry was posted on Wednesday, August 11th, 2010 at 1:57 pm and is filed under Go See. You can follow any responses to this entry through the RSS 2.0 feed. You can leave a response, or trackback from your own site.