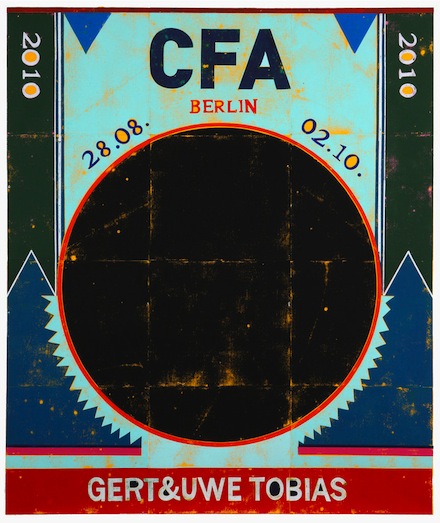 Currently on view at Contemporary Fine Arts Berlin is “Neue Arbeiten,” an exhibition of recent work by fraternal collaborative Gert & Uwe Tobias (b. 1973). The show features over fifty pieces by the Romanian-born twins, including ceramic sculpture, drawings, collages, and the colorful, large-scale woodcuts for which they are best known. Their interdisciplinary practice incorporates folkloric imagery, regional iconography, and popular culture, creating a self-referrential, multimedia visual narrative. Like all of their previous exhibitions, they designed a site-specific woodcut poster for the CFA show, which comments upon and participates in the body of work on view. 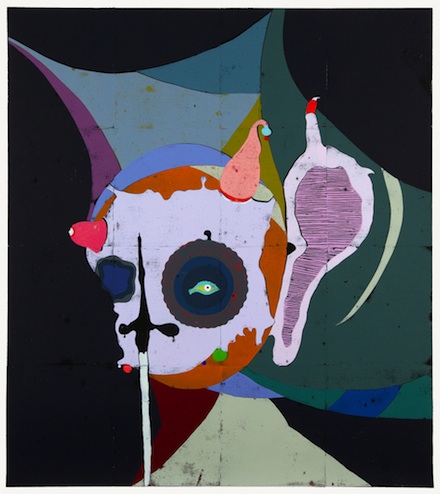 Though they currently reside in Cologne, the artists have remained engaged with the local mythology and external perceptions of their native Transylvania. Motifs derived from Eastern European folklore, folk art, textiles, typeface, graphic design, and Constructivism are repeated, exaggerated, and abstracted throughout their mixed-media body of work, creating a dialogue between disparate pictorial traditions and modes of production. Often credited with reintroducing early-modern woodcut technique into the lexicon of contemporary art, their anachronistic, collaborative use of this medium addresses the historical trajectory of image-making, incorporating the anonymous practice of Renaissance print guilds into the modern discourse of mass-produced images. 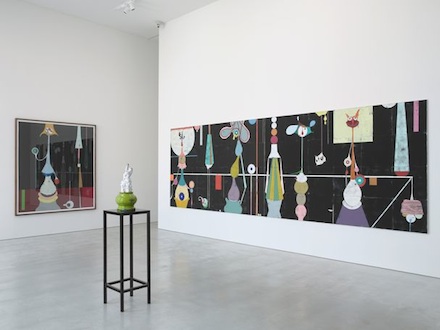 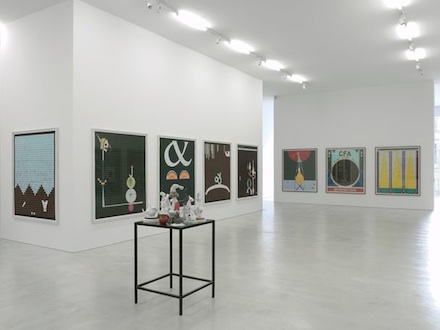 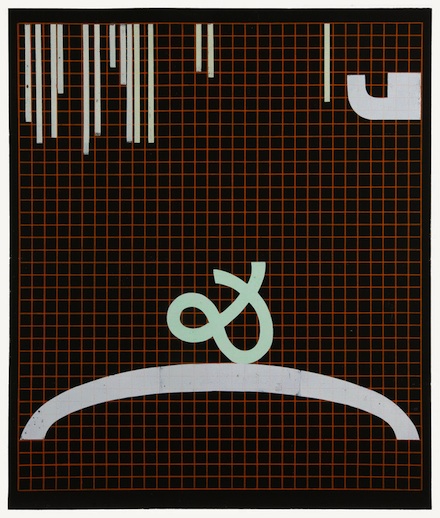 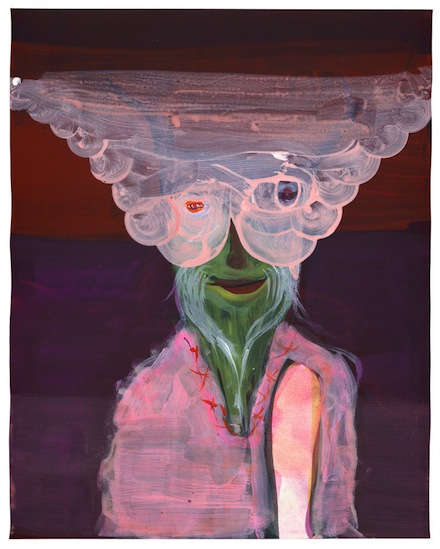 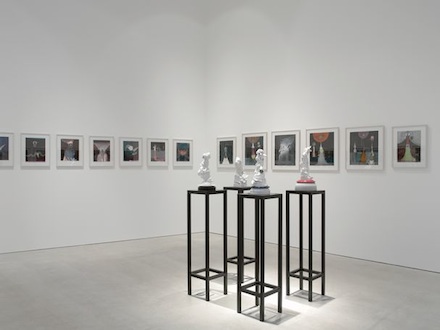 Their repertory of figurative creatures has developed throughout the various mediums in which their work is presented. In “Neue Arbeiten,” their unique vision of character-driven mythology is paired with colorful, geometic woodcuts which play upon the rigid, rectilinear forms and typesettings of graphic design. Here, they also merge concepts of mechanized mass-production with folklore in wider-format woodcut canvases, which redeploy abstracted representational forms in the creation of protracted, assembly-line-like compisitions. They succeed in blurring what distinctions remain in the post-modern era between “high” and “low” forms of art and craftmanship, and between independent authorship and broader cultural property.

Other recent exhibitions by the artists include “Come and See Before the Tourists Will Do – The Mysteries of Transylvania,” held earlier this year at New York’s Team Gallery. In this series, whose title and works refer to the 2004 Cologne solo show of the same name, Gert & Uwe Tobias’ woodblock prints explore issues of cultural identity, through the lens of Romanian Dracula mythology. Both artists were trained at the Hochschule für bildende Künst in Braunschweig. They have participated in numerous international group and solo shows since the beginning of their collaboration in 2001. In 2008, they were featured in MoMA’s Projects 86; two years prior, they held their first solo museum exhibition at the Hammer Museum in Los Angeles.

This entry was posted on Thursday, September 9th, 2010 at 1:00 am and is filed under Art News. You can follow any responses to this entry through the RSS 2.0 feed. You can leave a response, or trackback from your own site.