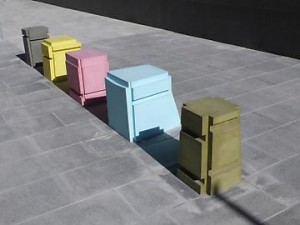 Currently on view at Gagosian Gallery on Davies Street in London is an exhibition of drawings and new sculpture by Rachel Whiteread. The sculptural work is the latest in a series created for outdoor spaces, produced in soft materials such as plaster, rubber and resin. Five cubic forms of varying size, texture, and color are positioned in a straight line. A principle theme in Whiteread’s oeuvre, the new sculptures rely on form to reflect upon the surrounding negative space. 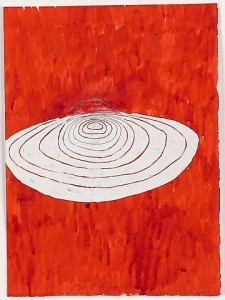 Found on each of the five cubes are small linear incisions which disrupt the otherwise smooth surface of the object. Shifting light and shadow are necessary elements in the perception of each piece, meant to alter their appearance when situated outdoors. 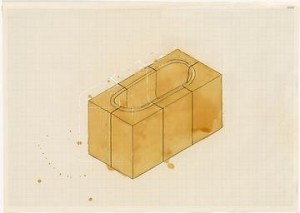 Also on display are various drawings by the artist of her sculptural works. Whiteread uses graph paper for her notations, a formall decision which recalls the techniques of her Minimalist predecessors. Her forms similarly incorporate the geometry of the grid, but in a way which is much less materialist and function-driven. Instead she strives to evoke her subjects through the paper itself, which is at times chosen simply because of its color. 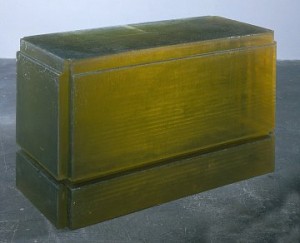 British artist Rachel Whiteread (b.1963) has developed various approaches to casting and impression as a subject matter and vehicle for content. She often traces human contact with various environments and spaces in her casts, in order to heighten both their psychological and physical impact.

The show corresponds to her traveling exhibition of drawings, which opened at Tate Britain on September 8th, 2010.

This entry was posted on Friday, September 10th, 2010 at 1:00 am and is filed under Go See. You can follow any responses to this entry through the RSS 2.0 feed. You can leave a response, or trackback from your own site.