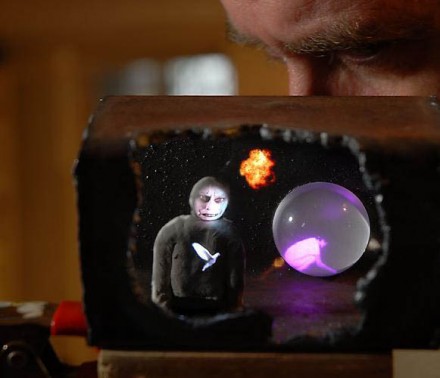 Art Observed attended last month’s opening of Tony Oursler’s exhibition Peak, presented by Lehmann Maupin Gallery in New York. The show is comprised of all new works by Oursler, and continues his long standing examination of technology’s interaction with the human psyche. In Peak, the artist focuses in particular on the increasingly-central importance of computers to human existence, and the relationships that manifest within these virtual platforms. Each of the bizzare microcosmic scenes Oursler has created communicates emotions that are central to this connection, such as obsession, escapism, isolation, and sexual fetish. 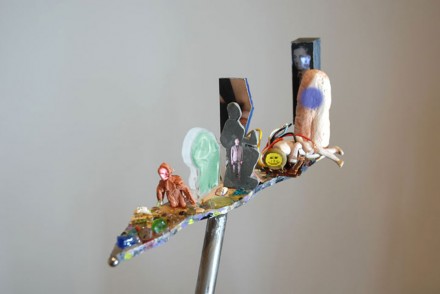 Though Oursler presents the multimedia work he is best know for, particularly his use of video projection on found objects, his current exhibition requires, quite literally, a closer observation. The installations combine glass, clay, steel, and other raw materials coupled with synthesized performance language and rhythmic editing. They stand at eye level, sparsely distributed throughout the large gallery space. The strange and intriguing complexity of the dioramas draw the viewer in, unavoidably engaging them with the work and in turn Oursler’s dialogue.

The exhibition is theoretically rooted in Oursler’s nuanced understanding of Masahiro Mori’s “The Uncanny Valley,” which suggests that as inanimate objects become closer in appearance to the human form and face, mankind will find them increasingly disturbing and therefore cast into the realm of the uncanny. According to the gallery, Oursler scrutinizes our contemporary Internet usage, viewing the Internet as a mechanical reflection of our human psyche, inducing a compulsive relationship despite its disturbing effect. The dynamic developing between humans and the virtual apparatus becomes and is an epistemological mirror of the human consciousness and, thus, uncanny in its nature.

Peak coincides with another of Tony Oursler’s exhibitions, Valley, which is the inaugural exhibition of the Adobe Museum of Digital Media, and explores similar themes. Peak will run through December 5th, 2010, at Lehmann Maupin Gallery, 201 Christie Street. 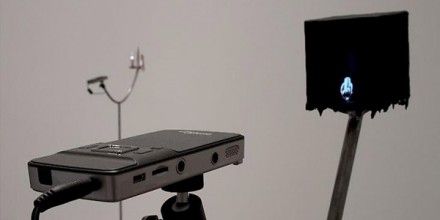 This entry was posted on Saturday, November 6th, 2010 at 2:59 am and is filed under Art News. You can follow any responses to this entry through the RSS 2.0 feed. You can leave a response, or trackback from your own site.