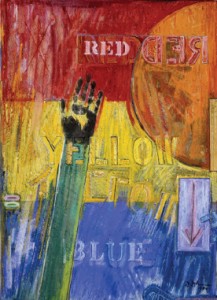 Drawing Over, an exhibition of Jasper Johns drawings from the last four decades at the Castelli Gallery – of which many pieces have never been exhibited – closes on Saturday.  Chosen by the artist from across his lengthy career, the works are drawings over Johns’ own prints. For example, Land’s End, a monochromatic intaglio print from 1979 is drawn over in pastel, creating the work Land’s End, 1979/1989.  The collection sees the artist change the composition of the original while wrestling with his own iconography, sometimes decades later. Johns has drawn over a group of six of his renowned Flag prints, 1972/1994, illustrating the process of reinvention central to this exhibition. 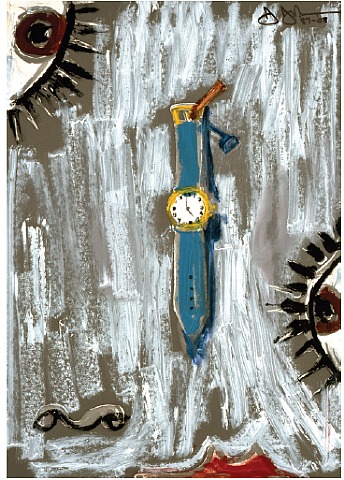 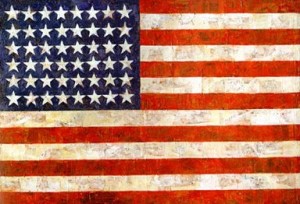 Johns has dealt with popular symbolism since his first major show, also at the Castelli Gallery in 1957. There, his most well-known painting, Flag (1955), was unveiled. On the tail of Abstract Expressionism, Johns and his lover and peer Robert Rauschenberg, represented a new movement of artists concerned with the production – and subversion – of mass meaning. Johns’ work centers on images of flags, targets, maps, letters and numbers, rendered in a lush painterly style, to deconstruct common symbols and question the role of the arts in relation to the production of popular signage. The power of Flag 1955 is its separation of the American flag from a patriotic context, rendered instead as a purely visual entity. Johns is primarily considered within the Neo-Dadaist movement of the early 1960s, but his use of popular imagery places him in relation to the emergence of Pop Art and he is often considered an early influence of the genre.

Johns’ use of his own imagery in Drawing Over continues his process of re-considering symbolic forms, but within his own canon. The use of the history of his own visual language presents the artist’s reflection on his significance in art of the past 40 years. In many ways, Drawing Over is the artist’s creation of a retrospective with his own meta-commentary built in. This is a crucial show for admirers of Johns’ work, but also in terms of the position of Neo-Dada and Pop Art today. 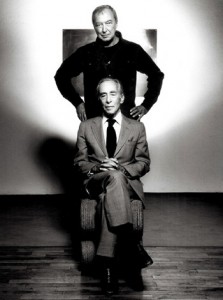 Jasper Johns and Leo Castelli, via The Art Story

Johns’ and the Leo Castelli Gallery have a long history, dating back to that first show in 1957. The Leo Castelli Gallery was a leader in Abstract Expressionism and then, in the Neo-Dadist, Minimalism and Pop Art movements. The director of the Whitney Museum David A. Ross, is quoted as saying, “Wherever the important work was in postwar American art, Leo has been at the center of it.” This history enriches Drawing Over and provides an appropriate backdrop for Johns’ artistic exploration of his past works.

This entry was posted on Friday, December 17th, 2010 at 12:58 am and is filed under Go See. You can follow any responses to this entry through the RSS 2.0 feed. You can leave a response, or trackback from your own site.