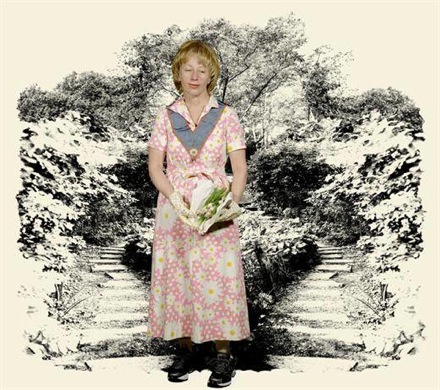 Dressed in anything from a faux-nude suit to a modest red gown, Cindy Sherman stares out from the walls of Sprüth Magers in London. The costumes and odd personas follow in Sherman’s usual tactics, but the large size and unframed wallpaper-like appearance are a step away from her past series. Stretching from floor to ceiling, her photographs dominate the gallery space with surreal characters standing guard over symmetric idyllic backgrounds.

more story, images and links after the jump… 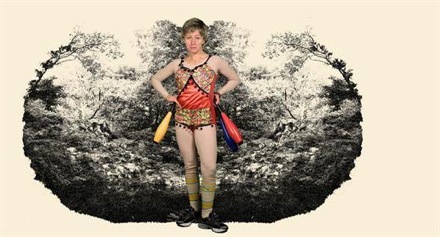 In her newest series of works, Sherman places nine characters among five backgrounds: a woman in a floral pink dress and black trainers holding a bundle of onions, a figure clad in a nude suit complete with a felt merkin wielding a plastic sword, a juggling lady holding her hands to her hips with three clubs and a silk jumpsuit, to name a few. Casting unconcerned looks at the viewer, Sherman’s family of characters stand like sentries outside of their disproportionate backgrounds. Their size and placement set them apart from the gardens and forests they nearly inhabit, a distance that gives the impression they belong elsewhere.

The background of each mural is a pastoral image digitally reflected about the center of the image and reproduced in a grainy single tone. The murals are all printed on phototex adhesive fabric, the color of which shows through and around the background images. Similar landscapes appear in Toile de Jouy patterns—sequences of monochromatic bucolic scenes often found on fabrics or wallpaper. Typically idyllic and relaxed, the people depicted in Toile de Jouy patterns draw a sharp contrast to the cast Sherman portrays. 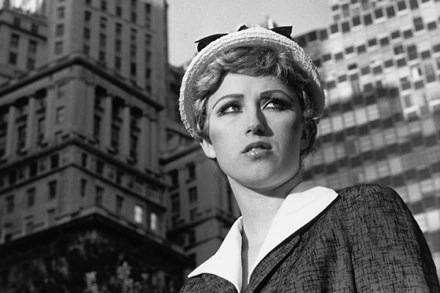 Though Sherman keeps with her practice of acting as both photographer and model, this new series shows a departure from some of her common practices. Her previous use of make-up to highlight or soften certain features, as in her series featuring clowns (2003) and her Untitled Film Stills (1977-1980), is replaced by digital adjustments, giving the effect that the characters all appear similar enough to be somehow related despite their incongruous manners and occupations. Besides this familial resemblance, there are no evident associations in the statures of the characters depicted. 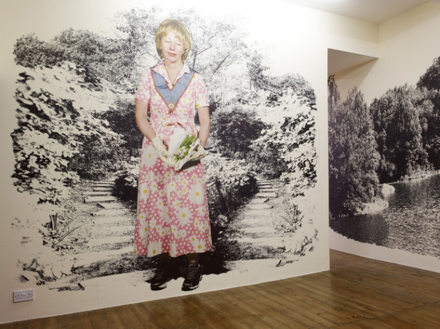 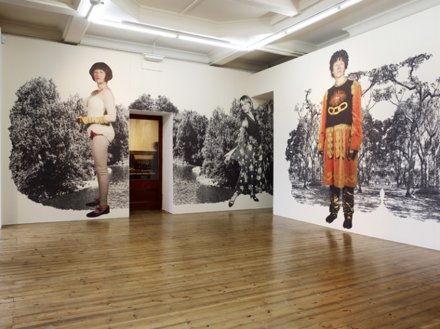 In a bold move, Sherman also made the series adjustable and able to be reprinted based on the dimensions of the space where she shows them. In the one other gallery where the series has been shown, the Pinchuk Art Centre in Kiev in 2010, the images were in different combinations. Someone purchasing a piece must include the number of figures—one, two, or three of Sherman’s characters—and the dimensions of the room where the piece will be. Her choice to make the elements interchangeable and sizes variable allows her to adapt her art to any space, but is a risky move in selling to an audience accustomed to purchasing art more readily valued.

This entry was posted on Wednesday, January 19th, 2011 at 1:27 am and is filed under Go See. You can follow any responses to this entry through the RSS 2.0 feed. You can leave a response, or trackback from your own site.