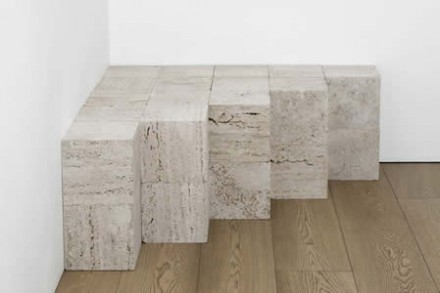 Now on view at Sadie Coles HQ in London is TRAVERTINE/BASALT, featuring the American sculptor and minimalist, Carl Andre. This show marks Andres’ fifth at the gallery, the current exhibition a sequence of sculptures made from Icelandic basalt and two works of travertine (a form of limestone). Made throughout his career, the artist’s work conveys qualities of linearity, repetition, and geometry. The three installments on display, the basalt Altbase series and the two travertine works, Grecrux and Sum Roma, reinforce Andre’s appreciation for the material physicality and aesthetic qualities of structural—and architectural—forms of sculpture.

More text after the jump… 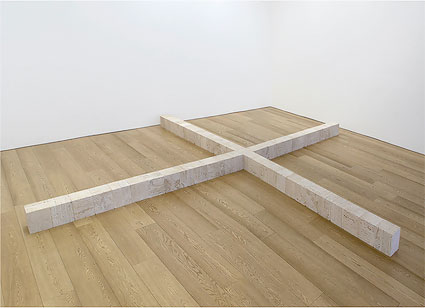 For his sculpture, Grecrux, Andre used 53 travertine blocks to create a Greek cross, or cross quadrata, in which each of the four extended lines are of equal length. This geometrical sculpture was one of Andre’s earliest works in travertine, expressing the tangible relationship between sculpture and space. Andre did not see his work as a vehicle for a metaphor, rather, his sculptures represent structure—an object taking up physical space with a geometric form.

TRAVERTINE / BASALT will be on display until the 5th of March. Look forward to his upcoming show, the first major retrospective of his work ever shown in North America, at the Dia Art Foundation in New York in 2013.

This entry was posted on Saturday, January 22nd, 2011 at 10:52 pm and is filed under Go See. You can follow any responses to this entry through the RSS 2.0 feed. You can leave a response, or trackback from your own site.