Current Disturbance is a singular installation that fills a room at the Whitechapel Gallery in London, the third in a series of four displays from the Daskalopoulos Collection in Greece. Using Marcel Duchamp’s infamous “Fountain” as a starting point, “Keeping It Real: An Exhibition in 4 Acts” seeks to explore the line between art and reality and the relationship between the artist and the tactile world.  British – Palestinian artist Mona Hatoum‘s light-filled creation was first shown in 1996 at the Capp Street Project, San Francisco and is now being shown through March as a part of Whitechapel Gallery’s initiative to open private collections for public viewing. The installation is comprised of stacked wire cages, a multiplicity of light bulbs and the amplified sound of the electric currents coursing through the enclosed system. The interminable low buzz emitting from the structure, combined with the arbitrary flickering of light bulbs conveys a certain sense of discomfort and oppression that provides an open-ended commentary much in keeping with Hatoum’s widely political body of work.

The caged aspect of the structure seems perhaps to be reflection of  Mona Hatoum’s personal experience during the Arab-Israeli conflict in the 70’s when Hatoum found herself living in exile in London. Her work often references this shape, conveying the sense of isolation and removal she felt during that period. 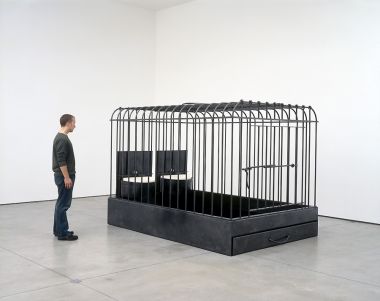 Current Disturbance is entirely self-contained form in which the walls of cages create a four-sided cube. Inside each of the 240 cages rests a single bulb, all interconnected via a central convergence. A single bulb is suspended from inside the structure, illuminating the junction box at the center. The immense grid of metal cages contrasts a sense of systematization with the chaos of randomized flashing lights and the mess of wiring covering the floor. The tension arising from this juxtaposition of elements only further serves to intensify the feeling of suspended energy and instability, inspiring a certain discomfort in its visitors.

This entry was posted on Monday, February 7th, 2011 at 7:09 pm and is filed under Go See. You can follow any responses to this entry through the RSS 2.0 feed. You can leave a response, or trackback from your own site.