Thirteen wall and floor pieces by Donald Judd are on display at the Pace Gallery. A sampling of the work from the last two decades of his life, the exhibition covers a wide range of materials Judd had not previously explored. The thirteen pieces demonstrate the artist’s use of space, materials, and color in his work, which revolve around his iconic box structure. Even before he began working with sculpture, his work has focused on stacks and repeated shapes, mostly with straight edges and right angles. 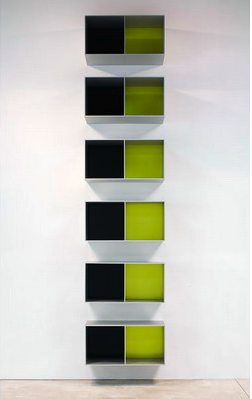 Starting with woodcutting as his artistic medium, Judd moved away from figurative imagery to increasingly geometric and abstract imagery. Before he became involved with sculptures, Judd painted with the same hard edges that his later sculptures would have. His pieces move away from any illusion: the two-dimensionality of a canvas is not interrupted by any imitation of a third dimension in his paintings. In his sculptures, illusionism is even further dismissed by bringing the art into the space of the viewer.

In a move away from the typical media of sculpture, Judd often worked with industrial materials such as stainless steel, Plexiglas, and aluminum. The modest materials reflected the same motivation Andy Warhol had in using silkscreen in his paintings rather than more commonly accepted oils or acrylics. The materials are durable and commonplace, which reflects the anti-illusory quality to his pieces. Judd’s only known work in granite, a floor-mounted piece from 1978 is on view, the first time it has been in an exhibition devoted to Judd’s work. It is composed of two vertical components that rest on the floor, a base that fits between them, and a top slab that extends to the edges of the wall components. 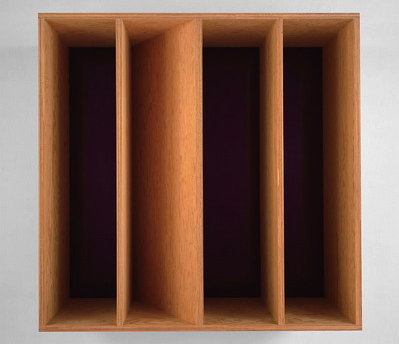 Judd began working with plywood in 1972, which allowed him to increase the size of his installations without worrying about buckling. Two plywood floor boxes, one from 1978 and a later piece from 1989, are on display as well as two wall-mounted boxes from 1992 and 1989, both with Plexiglas. Except for the 1978 piece, all of the plywood works contain diagonal parts, which give the structures a more complex composition. In the floor-mounted 1989 piece, the repeated diagonals give a sense of motion. The intersections in the wall-mounted pieces draw the eye in and lend the pieces more dimensionality.

In the 1980s, Judd started experimenting with Cor-ten steel, a material he had previously avoided because of Richard Serra’s frequent use of it. The exhibition includes one Cor-ten steel floor box, and a vertical Cor-ten steel wall piece with Plexiglas. These pieces are the only that the artist crafted in his long-term home of Marfa, Texas. Plexiglas comes up in many of Judd’s pieces, adding a translucent coloring to the natural coloration of the steel and wood. His use of enamel on aluminum adds a similar palette but with harder definition to the edges. The exhibition displays a wide range of colors and material combinations representative of Judd’s body of work.

This entry was posted on Monday, February 28th, 2011 at 12:10 am and is filed under Go See. You can follow any responses to this entry through the RSS 2.0 feed. You can leave a response, or trackback from your own site.