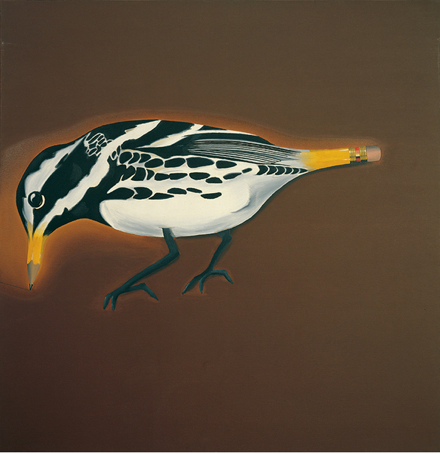 Collector Emily Fisher Landau made a gift of about 400 works of art to the Whitney Museum. Estimated to be worth between $50 and $75 million, the works of almost 100 artists range in date from 1950 to 2006—the earliest being a Robert Rauschenberg photograph of Jasper Johns in his studio, and the latest a 2006 Lisa Yuskavage etching. To commemorate this remarkable donation, the Whitney is showing eighty of the works in an exhibition titled Legacy on the fourth floor of the museum, which was named for Landau in 1995. 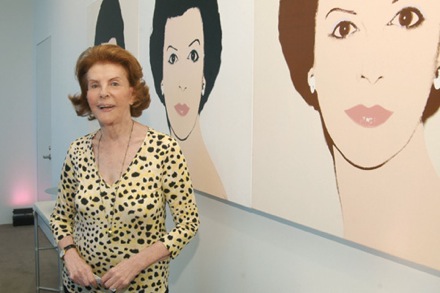 Emily Fisher Landau with her portrait by Andy Warhol (1982). Via Panache

Landau began seriously collecting art in the 1960s when she was married to Martin Fisher. She claims he used to tell her that he made the money and she knew what to do with it—a statement she took as a high compliment. Her eye for art was always particular, picking out only the pieces by artists she thought were the absolute best. Andy Warhol made two portraits of her: the first a commissioned piece in 1982, and the second because he heard that she wasn’t satisfied with the first. Her careful choices of what she bought combined with the half-century her collection spans gives the collection a great deal of cultural and historical significance. Collecting art highlights the connection between artist and audience, and draws together a sampling of artists that may not have been compared otherwise. 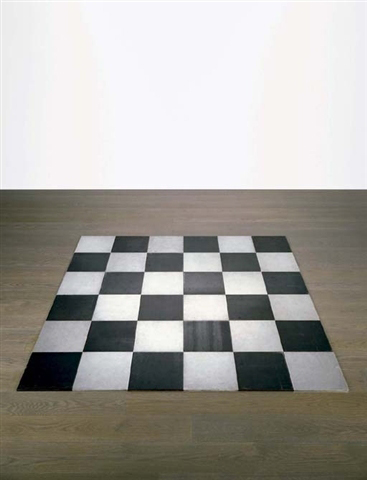 One section of the exhibition is devoted to minimalism, with works like Carl Andre’s 28 Lead Rectangle. Andre’s use of factory-finished raw materials in his sculptures, and his method of piecing them together without any bonding signify the simplicity in building and creating environments through art. Other notable minimalist artists represented in this section include John McLaughlin, Rodney Graham, Joseph Kosuth, Martin Puryear, Al Taylor, and Agnes Martin. The concentration of seminal minimalist artists allow viewers to see the way in which art responded to the cultural climate of the 1960s. Another section shows artists’ return to representational art through abstract expressionism and other schools. 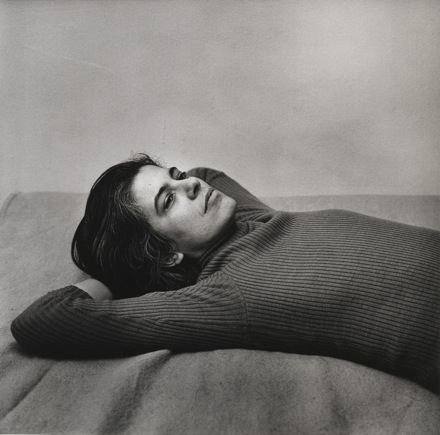 In Legacy, Landau’s support of younger, lesser known artists is apparent. She took risks in purchasing art from new artists when she thought they could soon emerge as recognized figures. The figures from the 1980s, including Felix Gonzalez-Torres, Robert Mapplethorpe, Peter Hujar, Nan Goldin, Keith Haring, David Wojnarowicz, and Lorna Simpson, largely explore conflicts with gender and race that prevailed in the political climate of the decade. Hujar is known for his stark black and white portrait photographs. His nude portraits captured the emotion and sexuality of his subjects in an era when queerness was first being recognized in New York City. He also did a number of iconic portraits of subjects like Andy Warhol and Susan Sontag, which are among the photographs on display in Legacy.

Besides her trust in emerging artists, Landau also showed a dedication to a small number of artists, who she followed closely. Among these are Richard Artschwager and Ed Ruscha. Ruscha is known for his association with pop art. Included in Legacy is one of his word paintings, Lion in Oil. These paintings show words in plain text over a background, a number of which are mountains. Often flippant and satirical, the phrases he uses are given a sort of comically epic quality in their large placement over such grand backgrounds. Ruscha’s displayed works span from 1965 to 2002, which shows how consistently Landau has followed this artist. 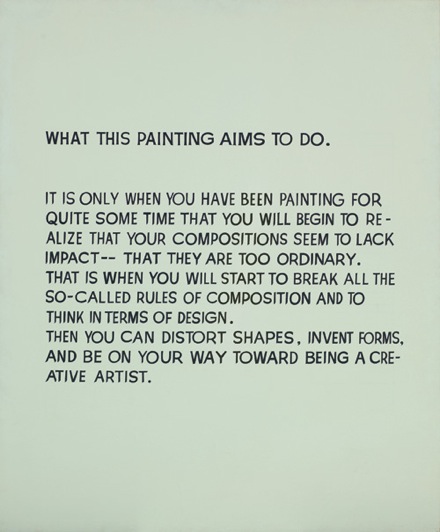 John Baldessari, What This Painting Aims to Do (1967). Via Art Tattler

The Whitney Museum highlights the following pieces in the exhibition:
-Works by Carl Andre, including seminal typewriter drawings and poems of the early 1960s and the large-scale sculpture 28 Lead Rectangle (1968);
-Works by Richard Artschwager, including his monumental painting City of Man (1981), which spans almost fifteen feet;
-Works by John Baldessari, including What This Painting Aims to Do (1967), a prime example of his important early text paintings;
-Photographs by Peter Hujar from the 1970s and 80s, including iconic portraits of Andy Warhol, Diana Vreeland, Divine, Lola Pashalinski, Susan Sontag, and David Wojnarowicz;
-Works by Jasper Johns, including the first of the artist’s important Catenary paintings to enter the museum’s comprehensive holdings of his work;
-Two works by Willem de Kooning, a 1952 Woman drawing and a noteworthy 1987 painting, Untitled, which is the latest de Kooning canvas in the Whitney’s collection;
-Works by Agnes Martin, including important drawings from the 1960s and an early painting This Rain (c. 1960).
-A work by Glenn Ligon, who will be the subject of a Whitney retrospective opening on March 10, 2011;
-Works by Ed Ruscha, ranging in date from 1965 to 2002, among them two important canvases, Give Him Anything and He’ll Sign It (1965), one of his wry bird paintings, and Lion in Oil (2002), from the artist’s recent series of mountain paintings.

This entry was posted on Saturday, February 26th, 2011 at 1:12 pm and is filed under Go See. You can follow any responses to this entry through the RSS 2.0 feed. You can leave a response, or trackback from your own site.