The aftereffects of Dan Colen’s highly publicized, and certainly polarizing breakout show at Gagosian Gallery last fall still resonate.  Though some saw Colen’s show as Icarian, it certainly put the artist on the map for a broader audience.  Astrap Fearnley gallery in Oslo now presents a show that, while displaying works that are certainly less grand and ambitious than the inverted life sized skateboard ramps and toppled motorcycles of the Gagosian show, still has a nicely broad scope of the artist’s works over time.  Chewing gum, oil paint imitating bird droppings, graffiti tags, stills from Disney movies: these are what Dan Colen uses to create his art. Part of the “Bowery School” from downtown New York, Colen creates art from everyday objects and experiences. His painstaking reproductions of recognizable scenes undermine perception, as in The Cloud and the Ghost (The Birds and the Bees), where an impossible ghost rises out of a glass on the bedside table towards a hand holding out pills from a cloud. At the same time, his purposeful randomness takes away the control most expect in art. Astrup Fearnley brings together a collection of a wide range of Colen’s work in his exhibition, Peanuts. 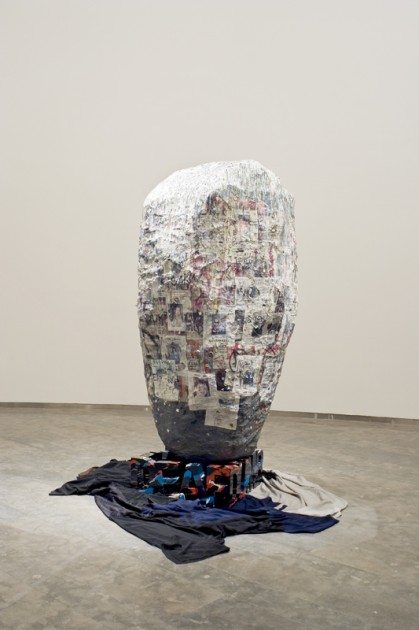 Missing Schmissing at first looks like a large rock covered in missing signs, all plastered with graffiti and bird droppings—a work of found media. The realistic imitation is made from papier-mâché and oil paint, including the realistic bird droppings and hunks of chewing gum. Ranging from posters for missing teenagers to joke ads reading “Wanted: Pussy, dead or alive,” the signs are a familiar sight. The false stone rests on a rock base reading “Deaf Dumb and Blind,” and a burka is draped around the rock. Colen’s hyper-realistic approach to perfectly reproducing every detail contrasts with the haphazard way these signs would be treated in reality, and the flippant way the graffiti tags read. 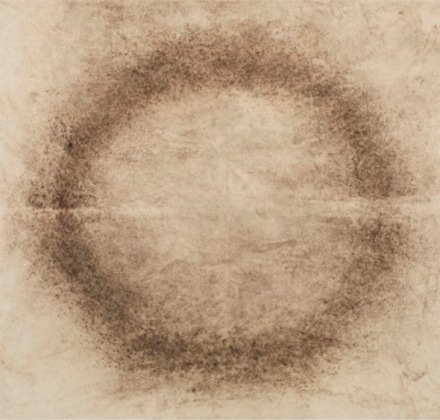 Exploration of mimicking chewing gum in his sculptures led to Colen’s Pollock-like chewing gum canvasses. After copying the look of the gum with paints, he decided it just looked better to use actual gum. Moving from the high-end medium of oil paints to packs of gum, representative of mindless chewing with no nutritional value, gives this series a signature gritty and bold quality. The paintings progressed from the tedious process of having all his studio assistants chew gum with him, which proved to be too slow, to heating the gum and tossing it across the canvas. The pre-determined colors and the randomness of where they land when thrown gives the later chewing gum pieces an accidental beauty Colen often aims for. Similarly random processes come up in other works of his, notably a series done by dragging canvases through mud and grass, hitched to the back of a car. 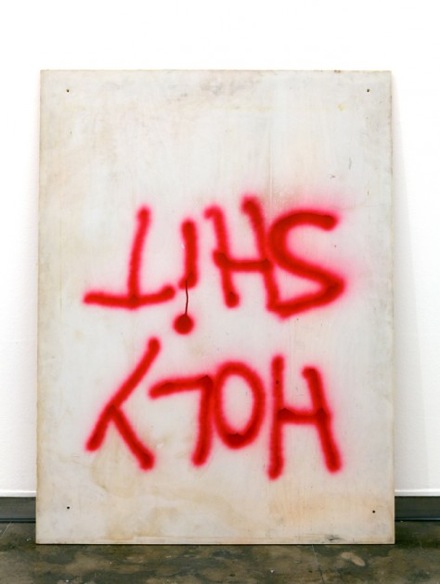 Peanuts provides further exploration of the act of tagging. A series of paintings reading “Holy Shit” are mounted upside-down in a row, all looking like simple, quickly sprayed tags begging for an accusation of being too low to be true art. Close inspection, though, reveals that only one of these panels is actually a quick tag: the others are all careful reproductions of the first, and only appear to be spray paint through Colen’s close attention to detail. The initial spray paint piece resulted in a somewhat random placement of the smaller details, and each reproduction adheres to the original randomness. Holy Shit, in its repetitive and detail-oriented layout, draws attention away from the heaviness of the profanity and refocuses on the process of creation. 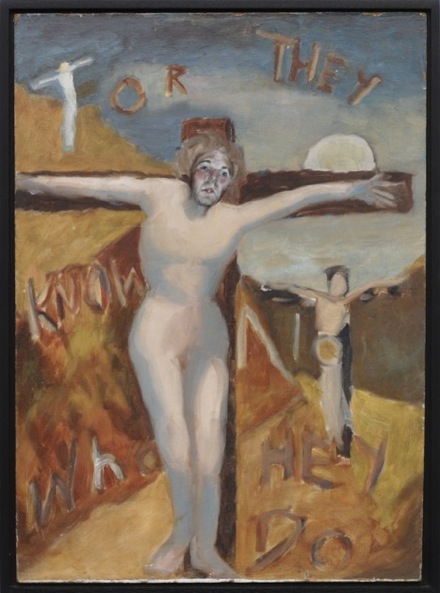 Another method of reproduction Colen has used in his work is that of over-painting. Using found paintings as his base, he would add new layers to make them his own. In For They Know Not What They Do (Self-Portrait), an amateur painter has placed three faceless figures on a plain hilltop background. The shapes of the men being crucified form some letters in the phrase the artist used as the title. Colen added his face to the central Jesus figure, with a cigarette hanging from his lips.  A second self-portrait of sorts can be found in Me, Jesus and the Children. Colen painted a photographically realistic image of his chest, exposed through an unbuttoned shirt. Superimposed around a Jesus pendant hanging from his neck are cherub-like children, speaking to the Jesus pendant in speech bubbles. The surreal mixture of the cartoon and the near-perfect representation of the artist attempts humor and meaning. 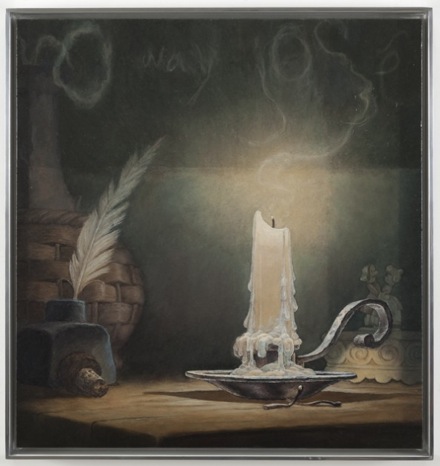 One series imitates an image from the animated Disney feature Pinocchio—Geppetto’s workbench, with a candle featured prominently in the foreground. Each image is the same, except for the sizes of the pieces and the words Colen has chosen to write in the smoke of each: No Way Jose, Holy Crap, Whatever. The candle on the workbench is reminiscent of candles in classic art pieces, though this candle is specifically chosen from an animated Disney film. Colen’s use of animation as his starting point highlights a pursuit of depth within his replication, since the original is also a form of imitation. Disrupting the solemnity of the scene, the words floating at the tops of each painting lend that same flippant tone found in much of Colen’s other works.

Dan Colen, The Cloud and the Ghost (The Birds and the Bees) (2003). All images via Astrup Fearnley

This entry was posted on Wednesday, February 9th, 2011 at 12:06 pm and is filed under Go See. You can follow any responses to this entry through the RSS 2.0 feed. You can leave a response, or trackback from your own site.