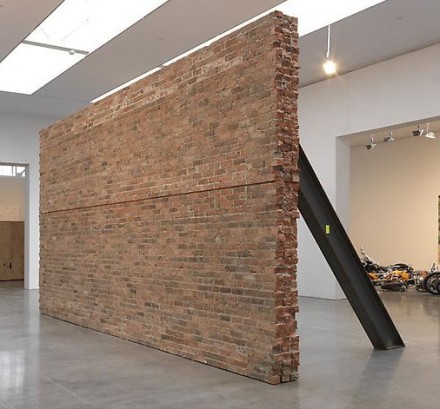 Dan Colen gets past his own (painterly graffiti) writer’s block of a sculptural brick wall (akin to his old urban-artifact based work) and progresses with new strides into the hallowed halls of Gagosian, replete with Gagosian scale, funding, and grandiosity. The gum and grit gestalt gestures are still there but the subject matter has taken a new turn. Namely, Abstraction, and abstraction as abstraction, or “Poetry,” if you will.

The abstract painting at the end of the gallery’s western wall, speaks of a new turn from the artist’s earlier more prosaic if suburbanistic urban-fetish ‘artifactualizations.’ The fashionable bad-boy has entered the brand-building (edifice on 24th street) and even brings with him a painterly painting from the wrong side of the tracks, river, and art history. 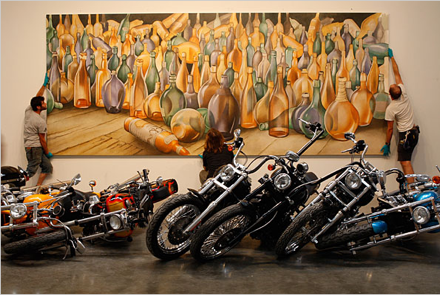 Beyond the fabricated brick wall, looms an apparently awful Cubist-colored painting that is reminiscent of one of the worst nightmares an artist can see in the NYC Metro Area: $20 paintings in the ‘Framer’s galleries’ of the New Jersey Turnpike. The piece is a muted hallucination of the cookie-cutter decoration-in-paint-on-canvas, sold for peanuts roadside on the way to the Holland tunnel into Manhattan.

Colen is plausibly showing us that he knows how to paint a dead-on death-like still life- regardless if it was his own hand, or a helping hand. (Here it is indeed more deft than the Hirst Autopsy series that adorned the very same walls, and one could have only wished that Hirst would have hired a better gun for those paintings, although the ‘artschoolish’ rendering hand does have a signature earnest or unstudied charm.)  Yet overall, Colen is looking Koonsian here in scale, so it makes sense to mention Hirst, although the comparison can be continued in the similar subject matter that Hirst extols and illustrates: the life, death, betrayal, loyalty (and legacy) subject matter of the thoughts of a 20-something year old – to misquote a recent unlocatable article. 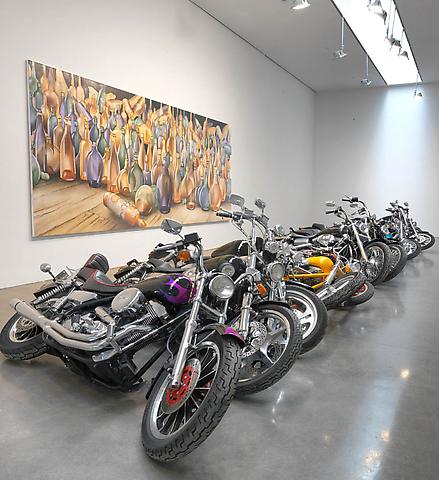 The new subject matter of the main ‘bad painting’ at mega-scale, is a standing and floating panoply of bottles, the array of a party that is over, with a row of Harley-Davidsons tipped over in front of it- itself a sculptural film-outake from an ‘uh-oh’ scene in Pee Wee’s Big Adventure. Both pieces want to tell you in a sense, that the rebel has turned over a new leaf, or just elegantly turned over a skate ramp, (see pic below) or changed his tune from self-styled street kid, and now walks a bigger happier walk, and still insouciant, even if it is LaBambastic in its naive-rebellion nature as well. 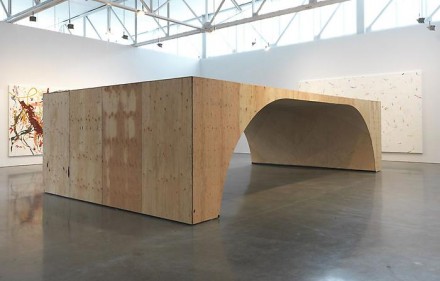 While the fun and perhaps inspiring music of La Bamba plays in your head, a thought lingers that the ‘Poetry’ here is not the simplistic title of the work, nor the Minimal cum abject expressionism or pottymouth Surrealism that Colen is esteemed for, along with the downtown pedigree that he makes clear in print form at the front desk, in various basic and banal but intriguing booklets, as well as his catalog from his down and dirty or daring days with Dash Snow (More on that later… ) but the overall sum of the parts- a stand of young trees in a new-growth forest- is what adds up to something worth talking about here vis-a-vis his earlier work.

While “Ab-Nox” was most likely coined earlier in the wild days of unfettered Abstract Expressionism, the abstract-obnoxious is probably a fitting approach to some of the more fashionable art happening downtown in NYC today, or now just yesterday, with Colen’s implicit graduation. But going back a year, as the Diesel Jeans ad campaign proposed and promoted, ‘Be Stupid’, akin to how Rob Base opined in “It Takes Two”: ‘stupid’ as in (I mean) ‘outrageous’, or ‘juvenile’ badboyism (Meese, Colen, Snow et al) takes a needed step forward into the freedom to fuck up, ‘fuck shit up’, or just fuck around, to fuck with the system, get fucked up or just fucked and fuck with people and stir some shit up, ehemmm, since things getting ‘too nice’ leads to a staid status quo of the worst of all- the boring. Perhaps Rem Koolhaas would disagree, and cite that the banal, the boring and the interstitial/institutional norms are where cultural momentum can be identified- consensus making that has made up its mind. But then, that is architecture, the concretization of philosophy and the extension of given historical form and technique- as an art that takes other approaches to search for the new, or just the newly exciting. 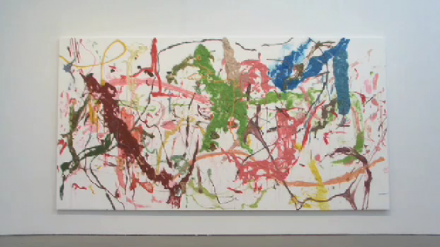 When, whats his name, Spicoli, in ‘Fast Times at Ridgemont High’, put his gum under the chair, the act is a kid’s petty disregard for both property and propriety in the service of convenience, casualness, and cool.  Colen levers such sly gestures of anti-establishmentarianism of the Eighties and turned it into paintings, or a lifestyle– a lexicon would be going too far, but he certainly put his (gummy) finger on it, and made it (a) work. Whether it was ‘beautiful decay’ of “The Seattle Gum Wall,” or the doublemint-dalmation black blob bespotted streets of New York, or just a gesture or visual discovery as inspiration for art-buyers who want a take home a piece of the apple from the big bad city, (it sure beats a Playbill) even if this is ultimately a suburban idea of urbanism and its differences from the gritty city across the other river in Brooklyn- off the hipster path- by Bed Stuy or any other functioning yet less-gentrified lower-income neighborhood, where you still might just get shot for acting like a drunken asshole, as opposed to the relatively cozy confines of the current state of the Bowery, shiny new condos and all.

Yet this ‘downtown’ art looks back, backwardly, and so ‘hard’, still- 21st century? globalism? technology?, whatever- and some reminisce ‘the good (h)ole days’ when all of Manhattan, save a few enclaves here or there, was a war zone of one sort or another- gang warfare or developer scheming, high or low crime, the city was an actual mess and it is hard to see it now, but when we look back at the pictures from the Warhol days, we wince at the new Bougieness of what it has become- moreover, the loss of a certain freedom as stated above, and the wistful wish and the taking-on of remaking if not finding that freedom anew on these historical footprints in the rare streets that haven’t been sandblasted clean- and it is this remaining dirt that is capitalized in this type of work, as it remains in some of the hearts of many New Yorkers, both original, former and recent arrivals- wondering where Abel Ferrara’s fabled, ‘The King of New York’ still lives. 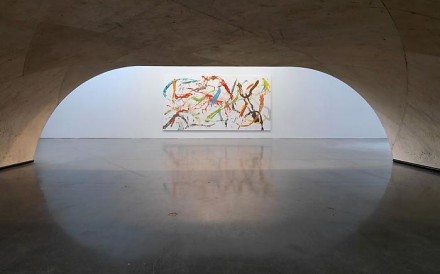 At Gagosian, Dan Colen takes minor monuments of youth culture to high art from his earlier series of artifacts and artifices of grit, graffiti, and grunge. White walls are ‘too’ pristine, so in order to keep the product moving… just bring in a little dirt and make it look really good.  Maybe this is a bit more hip-hop than grunge per se, or perhaps a hybrid, because hip-hop is actually equally or more independent, enterprising, and self-asserting, and this gesture is more glib or lackadaisical in its effort. Listless is more, dumb is smart, stupid is real, stupid is “Alive with Pleasure!”- so leave the prim presentations for Newport, in Rhode Island. This new port portrait is cigarette-art burning holes in all that, and standing up for a little soot during the Greenification of America.  Such ‘sootified’ ‘Grey-washing’ though might be the counter to Green-washing, because this is affect too- that Industrial grit romanticism is over, as Jerry Saltz said, fresh from an art-world rebellious TV land semester, getting in touch later with more real people who have questions about art-student art notwithstanding, there are indeed a lot of lay people who are very interested in art. The wholesale gum-by-the-bucket paintings are punchy and puerile, but what the hell, they kind of ‘rock’ colorfully- and smell horrible or great, depending on how chemical-smelling you like your atmosphere to be, but they fly in the face, or out of the face, of something. 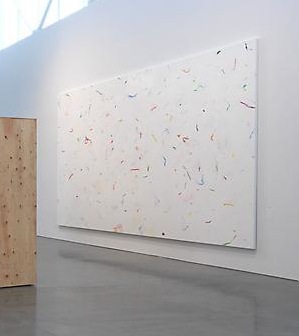 The most easily missed and hidden of all works in this show is probably the least obvious- the squiggly line drawing painting. It simply is engaging and you don’t need to add a text about string-theory next to it for it to have meaning today. If Twombly were dead he’d probably would turn over in his grave and have a good laugh too- not a laugh-at, mind you, a cheering on laugh-with… and it would be curious to pair the findings of the graffiti and grit abstractions of Europe (Twombly, Tapies, Burri et al) with the downtown ‘dumb’ dudes today. 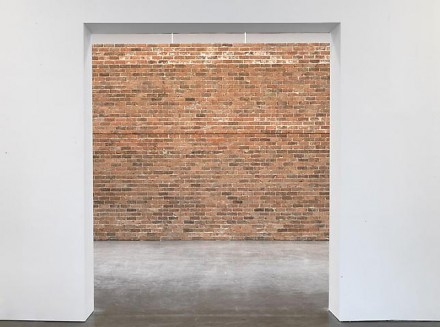 Snow and Colen may not seem articulate, or even ‘genius’ as Colen claims for Dash, but they did/do live a life as they imagined, and they paid and made the prices. Dash is loved, and has joined the youth pantheon in the sky and will be missed to say the least. Colen carries on with love, as he must as an artist, and as delicate a matter as death may be, the matter of fact about that whole scene and the downtown delicious and debaucherous dark end of the 20th century is a closed chapter now somehow, but the art remains in motion, and at Gagosian, is in full transformation. 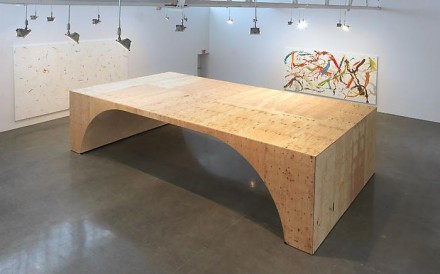 Arte Povera is probably through being cited for now, post-abject could be an operative word, but abject isn’t the full motivation, what we are talking about here is ‘fun’ (subtle and sly snapshots of strategic fuckitall, fuck money, free drugs, fuckyoufancyface-freedom), not gloomy grime and the really dirty-dirty- this is a portable clean dirty that you can take home with you, and archive achivally, or trade on ebay as the value rises, but that is a darker commercial take on what was supposed to be the objet d’art essence of a real, fun, hardcore lived life. ‘Keeping it real’, ‘return to the real’, reality shows- reality bites, snorts and bites the dust and the dissed. There was a ‘rebellion’ here of sorts, as glossy as it looks in the too-real digitally crisp magazines and blogs… Ostensibly, it was more of an indication of an approach to new found ontological freedom that the city provides, and that this work perhaps unconsciously signifies. Americans want more of that, or at least the mythos, after their average 46 hour work weeks, and this artwork, while kind of weak conceptually, fits the bill for that and its shadow zeitgeist below 14th street, and anywhere where people are still looking for the ‘old’ ‘real’ New York.  Even Kathy Grayson and Meghan Coleman’s new gallery ‘the Hole’ is a ‘nice’ space in the ground floor of a nice building in Soho, directly connected to a bourgeois elevator lobby in its rear entrance- it’s all quite a perfect paradox for art in New York. 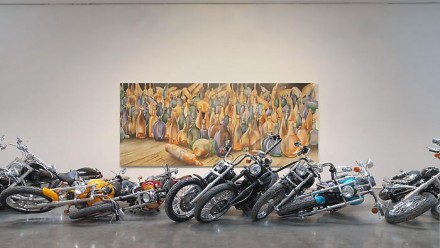 – This is an editorial review by Patrick Meagher, co-authored by Silvershed.  Patrick Meagher is an artist living in New York and recently organized ‘Collective Show New York 2010′ at Participant.

This entry was posted on Monday, September 27th, 2010 at 1:00 am and is filed under Go See. You can follow any responses to this entry through the RSS 2.0 feed. You can leave a response, or trackback from your own site.