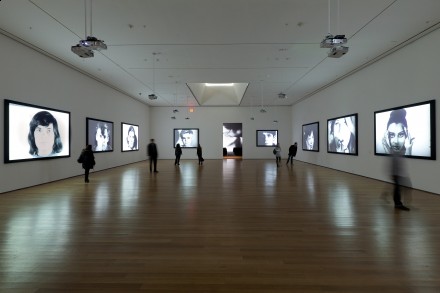 Installation view of Andy Warhol: Motion Pictures at The Museum of Modern Art, 2010.

Currently on view at the MoMA is a tightly curated sampling of Warhol’s Screen Tests, shot between 1964 and 1966, as well as his films: Kiss, Sleep, Empire, Eat, and Blow Job. The show was conceived of in 2003 by MoMA curator Mary Lea Bandy and was exhibited as Andy Warhol: Screen Tests. After moving to Berlin’s KW Institute for Contemporary Art in 2004, the show traveled internationally for five years as facilitated by PS1 Director Klaus Biesenbach.  All films have been transferred to video for the installation but there is still something archival—“filmic,” as Bisenbach says—about the footage. 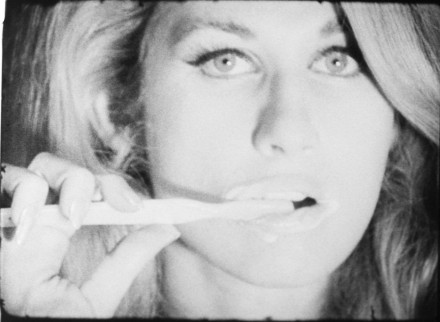 Originally called “stillies” by the artist, Warhol’s Screen Tests were filmed at the standard speed of 24 frames per second, the same as sound films or early “talkies.”  The footage was projected at the slowed rate of 16 frames per second, the same speed as early silent cinema.  This slowed pace imbues the Screen Tests with a languid, fluid quality that hints at something ethereal, and reflects Warhol’s veneration of his subjects.  The archival quality of these images is astounding, and as a series, the subjects appear almost ghost-like.  The decision to exhibit each video on a loop reflects a timelessness which Biesenbach refers to as a reverse Dorian Gray syndrome:  The subject ages while their youthful image stays exactly the same. 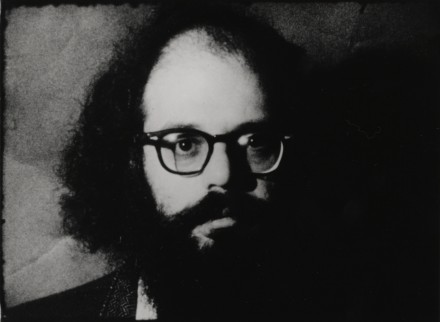 In his essay written for the exhibition, Klaus Biesenbach points to Warhol’s understanding of the subtle difference between acting and performance of the self, of celebrity.  With Motion Pictures, Warhol allows his Superstars to choose between acting and being, and iterations of both are on view in the gallery.  The cover girl Douyale Luna is distinctly giving face: she tilts her head towards the light, elegantly adjusting her chignon, outlining her larger-than-life cheekbones with acrylic fingernails.  Allen Ginsburg, on the other hand, stares stoically at the camera, his iconic glasses and bearded face frozen in time. 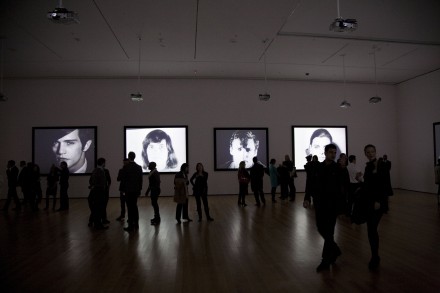 It is in this way that the relationship between rendered portrait and living picture is established.  Each video transfer is projected onto a seven foot monitor, with ten Screen Tests in total.  There is something arrestingly intimate about these films, a quality that is heightened by their eclipsing size.  Upon entering the gallery, the viewer is confronted with ten sets of eyes, staring purposefully and unmoving.  The effect is overwhelming and reproduces that of a portrait: the viewer is encouraged to take in the entirety of the image at once. 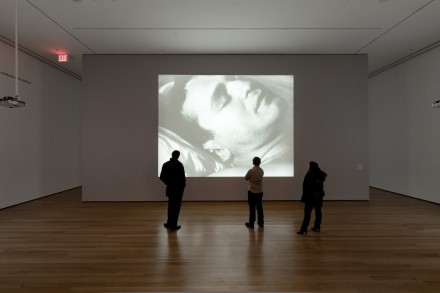 It is exactly this manipulation of the very qualities of film that Warhol was after.  His experiments with the nature of duration are present in his Tests, but are nowhere more evident than his long-format films: Sleep and Empire.  Designed to test the endurance of the spectator, these films were realized with a fixed Bolex camera over the course of several hours.  Taking a cue from his Screen Tests, in 1964 Warhol filmed the Empire State Building for 24 consecutive hours in silent black and white, highlighting the fixed nature of the architecture of New York in relationship to its frenetic cultural pace.  With 1963’s Sleep, Warhol filmed his lover John Giorno over the course of 5 hours and 20 minutes.  There is a tenderness to the film, which was on view in its entirety on Wednesday when I visited the show.  The vulnerability of the image is unmistakable: the thought of the director sitting quietly by his lover’s side, transfixed by the stillness of his quiet breathing, is somehow compelling.

This entry was posted on Friday, February 4th, 2011 at 10:55 am and is filed under Go See. You can follow any responses to this entry through the RSS 2.0 feed. You can leave a response, or trackback from your own site.