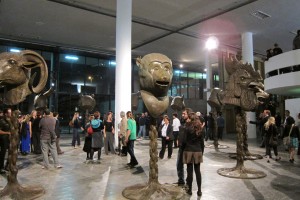 Circle of Animals/ Zodiac Heads by Ai Weiwei at the Sao Paulo Biennale, via Artdaily

One of China’s most controversial and celebrated artists, Ai Weiwei will exhibit Circle of Animals/ Zodiac Heads, his first major public art installation in Central Park from May 2nd- July 15th confirmed Mayor Michael R. Bloomberg yesterday.  The sculptural works are comprised of 12 monumental bronze animal heads inspired by the fountain clock at the 18th century Chinese imperial retreat of Yuanming Yuan just outside of Beijing. The heads will be placed at the historic Pulitzer Fountain in Grand Army Plaza in front of the Plaza Hotel on 59th Street and 5th Avenue. 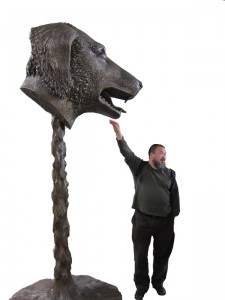 Ai Weiwei with a Zodiac Head, via Artinfo

The original 18th century piece was created by two European Jesuits at the request of Manchu Emperor Qianlong and portrays the animals of the Chinese Zodiac each spouting water for two-hour intervals from their mouth.  In 1860 Yuanming Yuan was pillaged by French and British troops during the Second Opium War and the heads were plundered. Today seven heads have been found including the rat, ox, tiger, rabbit, horse, monkey, and boar.  The location of the other five heads is unknown. (It should be recalled that the rat and the rabbit were offered at a sale of Yves Saint Laurent Collection at Christie’s in February 2009 and were purchased for $19 million by Cai Mingchao, an advisor to China’s National Treasures Fund who then refused to pay.)

Circle of Animals/Zodiac Heads by Ai Weiwei, via Artinfo

Ai Weiwei has re-interpreted the 18th century works on an oversize scale addressing issues of repatriation and the looting of ancient artifacts. “My work is always dealing with real or fake, authenticity and value and how value relates to current political and social understandings and misunderstandings. However, because Circle of Animals/Zodiac Heads is composed of animal heads, it’s a work that everyone can understand, including children and people who are not in the art world. I think it’s more important to show your work to the public. That’s what I really care about,” said Ai Weiwei in a recent statement. 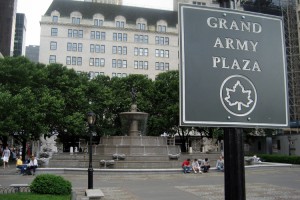 His 12 heads are cast in bronze and placed on bronze bases each weighing approximately 800 pounds with measurements of 4 feet high and 3 feet wide. They stand at 10 feet high when the base and the head are brought together exerting a monumental presence for the gateway to Central Park. “It’s a busy area, so it can be seen by ordinary people, but also it’s not exactly an art center. I like that people can notice it and at the same time, not to bother them too much,” said the artist of the new location in recent interview with the  NY Times.

Animal Circle/ Zodiac Heads are presented by the Chinese Contemporary Art Organization AW in cooperation with the City of New York. They were previously displayed at the 29th Sao Paulo Biennale in Brazil this past September. “It is innovative and thought-provoking exhibits like Circle of Animals/Zodiac Heads that keep New York one of the world’s great places to live, work and visit,” said Mayor Michael R. Bloomberg in a recent interview. After its New York City exhibition the works will travel to London’s Somerset House, Los Angeles’ LACMA, Houston’s Hermann Park, Pittsburg’s Warhol Museum, and Washington D.C.’s Hirshhorn Museum and Sculpture Garden.

This entry was posted on Saturday, March 12th, 2011 at 6:17 pm and is filed under Art News. You can follow any responses to this entry through the RSS 2.0 feed. You can leave a response, or trackback from your own site.