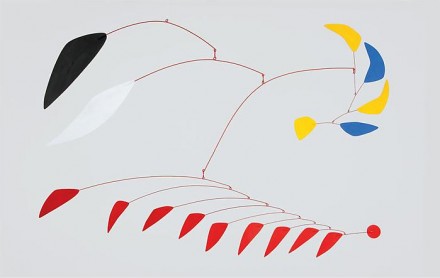 Larry Gagosian brings yet another big-ticket artist to his London location with a survey of Alexander Calder’s sculptures made between 1939 and 1960.  The exhibition occupies one long gallery and consists of three of Calder’s iconic mobiles: Triangles, Blue and Yellow Sickles, and an untitled composition.  Each work reflects the artist’s facility with wire and metal used to create tenuous “drawings” which float in mid-air. 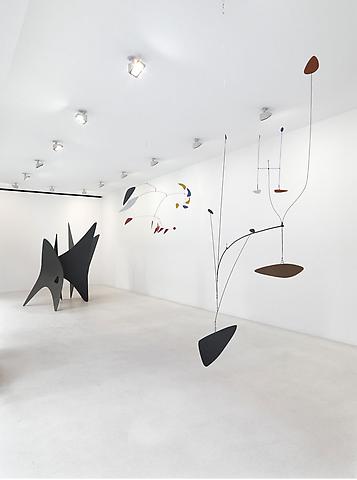 Trained in Paris as a toy-maker, Calder’s earliest kinetic works with wire were his Cirque Calder, a portable miniaturized circus fashioned from found objects.  The work eventually quadrupled in size and most recently was exhibited at the Center Pompidou in Paris though it now belongs to the Whitney Museum of American Art.

The mobiles on view at Gagosian reflect the same whimsy of Calder’s earlier work, this time showing an early  influence of Joan Miró whom he met while living in Paris.  The term “mobile” was actually coined by another Parisian contemporary: Marcel Duchamp, when asked of a way to describe Calder’s new kinetic sculptures. 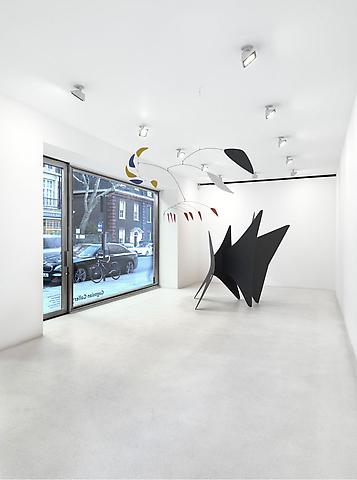 The curators place Calder within the formal tradition of conceptual art, noting however that he pre-dates the practice by several decades.  Calder has also been associated with high-modernism, particularly Mondrian, who also interrogates the relationship between blocks of primary colors and tenuous black lines.  The artist’s use of industrial materials was incredibly innovative in the early 1900s, and many of his first mobiles were driven by mechanical means, showing an influence of technology.  His most accomplished works, however, are guided only by the wind and are grounded by his “stabiles,” Calder’s static sculptures. 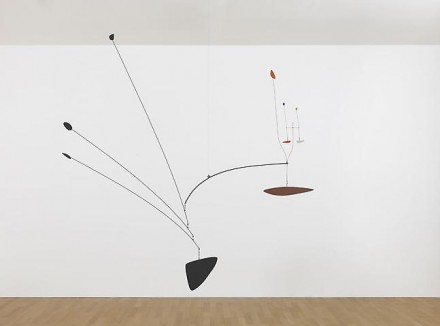 The show on view at Gagosian highlights Calder’s interest in composition and balance: the three works are displayed to highlight their visual harmony.  1960’s Blue and Yellow Sickles showcases the artist’s use of primary color and appears effortless, almost lighter than air.  The work, when viewed straight-on, reads two-dimensionally against the white wall behind it.  Calder’s earlier untitled piece, dated 1939, shows a refined interest in tonality, with a grounding thick black line from which tenuous strips extend in perfect balance.  The artist’s “stabile” Triangles, from 1957 grounds the installation, its weight secured firmly to the ground, it is a less delicate, though equally carefully composed work.

There is something inherently engaging about these pieces, perhaps it is their response to the surrounding elements, or even their relationship to one another, but they invite the spectator to linger and examine their subtle movements and graceful lines.  Calder’s installation at Gagosian London reads as a comprehensive sampling of the artist’s work from the middle of the 20th century. 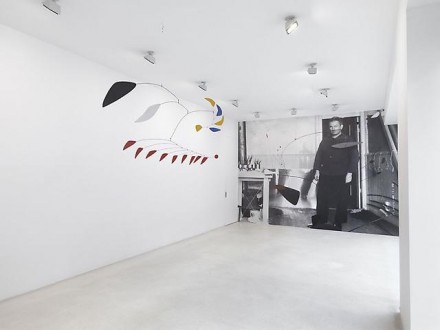 This entry was posted on Saturday, March 19th, 2011 at 3:00 am and is filed under Go See. You can follow any responses to this entry through the RSS 2.0 feed. You can leave a response, or trackback from your own site.