The auction record for a work by a living Chinese artist was set on Sunday at Sotheby’s Hong Kong during a 105-lot sale of works from the Ullens collection of contemporary Chinese art. The white glove sale realized $54.8 million – more than triple its high presale estimate of $16.7 million. 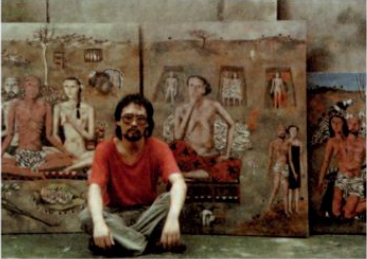 Zhang Xiaogang in his studio with Forever Lasting Love, via Sothebys.com

Nearly every lot flew past its presale estimate, and Zhang Xiaogang‘s tryptic was no exception. The catalog notes that one panel of the tryptic was sold after it was exhibited at the 1989 China/Avant Garde exhibition at the National Art Gallery in Beijing. The three canvases were reunited for the first time since 1989 at the Sotheby’s auction.  The artist’s previous record was set during last October’s Contemporary Asian Art sale, also at Sotheby’s Hong Kong, when Chapter of a New Century – Birth of the People’s Republic of China II (1992) sold for $6.7 million.

This entry was posted on Wednesday, April 6th, 2011 at 12:10 am and is filed under Art News. You can follow any responses to this entry through the RSS 2.0 feed. You can leave a response, or trackback from your own site.