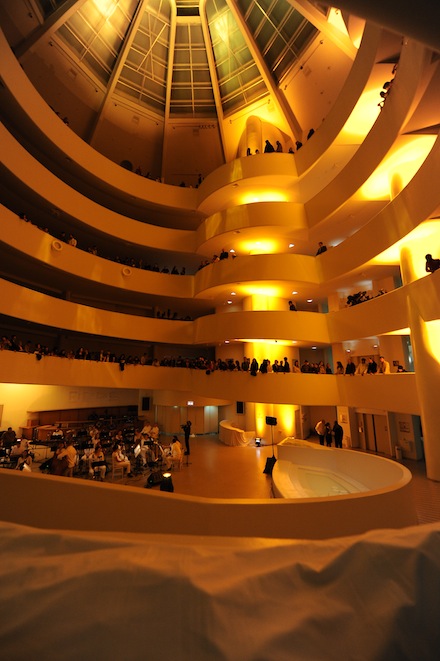 T.1912 by Dominique Gonzalez-Foerster with The Wordless Music Orchestra at the Solomon R. Guggenheim Museum, April 14, 2011. All Photos by Enid Alvarez

On April 14th, the Solomon R. Guggenheim Museum hosted an double feature of T. 1912, a performance by French artist Dominique Gonzalez-Foerster. She conceived it as a commemorative gesture on the 99th anniversary of the famous sinking of the Titanic, the massive ship that was pronounced “unsinkable” and which struck an iceberg and sank in the Atlantic Ocean on its maiden voyage in 1912. 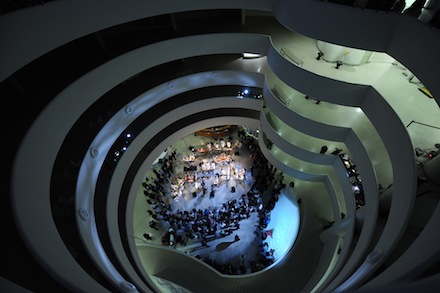 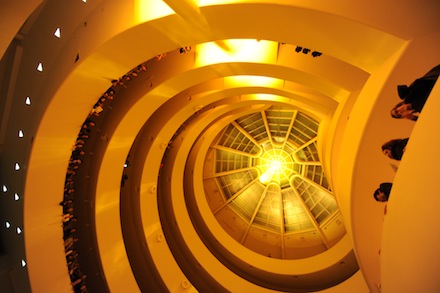 Gonzalez-Foerster is known for her work with video and installation. She is affiliated with the relational aesthetics movement, and that element of participation is present in this performance. To create an ambiance resembling the fateful last night on board, Gonzalez-Foerster started the first performance by presenting the attendees with a “Titanic-inspired three-course dinner” in the museum’s restaurant. Then they were guided to the museum’s rotunda, where they gathered near the edge to listen to The Wordless Music Orchestra playing The Sinking of the Titanic. This musical piece–an evocative study on impermanence and nostalgia–was composed in 1969 by sound artist Gavin Bryars. It is based on the Episcopal hymn “Autumn” that was played by a band on board of the Titanic while it was sinking, and became one of the most powerful and lingering symbols of the tragedy. As an ongoing project, The Sinking of the Titanic has included collaborations by Bryars with sound artists Philip Jeck and Alter Ego. 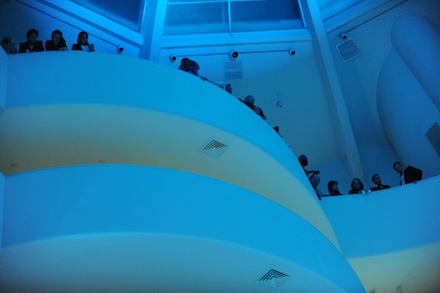 In T. 1912, the orchestra was located at the bottom of the rotunda with all performers wearing white clothes and bathed in a subtle blue light. From the high and oblique perspective on the rotunda, the spectator experienced an interplay of melodies and ambient sounds, architectural spaces, hued lights and darkness. Gonzalez-Foester intended to choreograph a collective confrontation with the void, identifying the audience with the passengers, and the navigation through the museum representing the sinking of the vessel. The effect of Gonzalez-Foester’s performance was a solemn and eerie transfiguration of the historical tragedy into an abstract artistic event, where participants created new associations with their surroundings and fellow audience members with a contained comportment, perhaps as a parallel to the accepting resignation of the travelers before the inexorable fate they confronted. 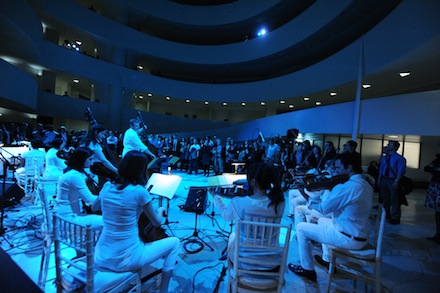 This entry was posted on Monday, April 18th, 2011 at 7:34 am and is filed under AO On Site. You can follow any responses to this entry through the RSS 2.0 feed. You can leave a response, or trackback from your own site.