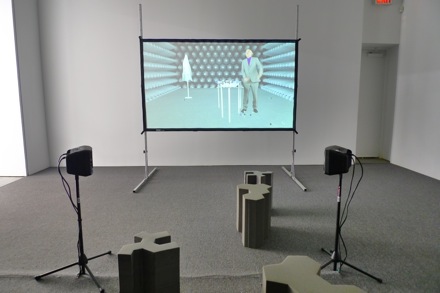 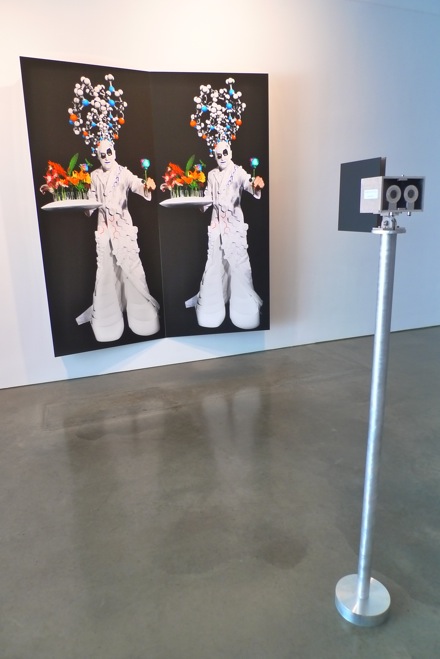 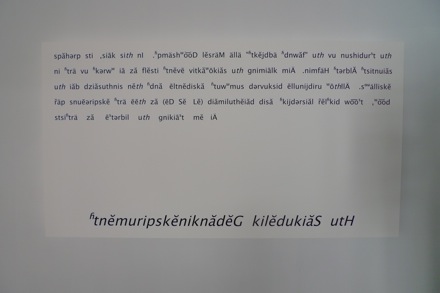 Installation view of The Psychedelic Gedankenexperiment.

The first room in the gallery bears the same name as the exhibition and consists of two video pieces, one of which requires 3-D glasses for viewing. In each, the artist (or mad scientist) explains his objective and his reasoning for the experiment, as well as some of its characteristics. However, the text he has prepared was spoken and performed in reverse, making the figure—already rendered in a sterile, green-screen produced empty space—seem much more cyborg than human. On the walls of the room is the spoken text which, with its near-phonetic spelling and added accent marks, looks at first like an unrecognizable foreign language. Upon closer and patient decoding, the viewer deciphers the mission statement for The Psychedelic Gedankenexperiment. 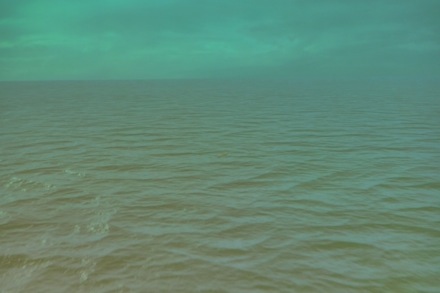 Another installation is Exacting Light, positioned in the rear room and completely cut off from any natural lighting. Entering the space, one occupies a complete sensorial void—it is pitch black, allowing no idea of what fills the room. In varying detached sequences, the artist’s voice is heard booming in the room, announcing short phrases that pieced together make a sort of poem. Simultaneously, a blinding strobe flash briefly illuminates the room, manifesting a large-scale suspended sculpture of an LSD molecule in the center of the otherwise empty chamber. 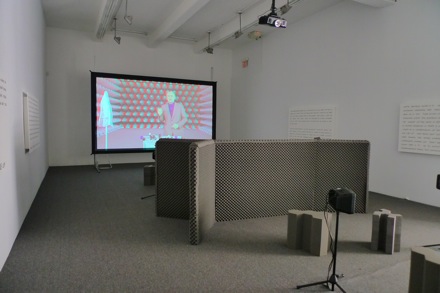 The 3-D component of Gary Hill’s The Psychedelic Gedankenexperiment.

Other works include Beauty is in the Eye, a diptych image of the artist appearing as a combination of mad scientist and eerie clown. Presented in front of a stereoscopic viewer, the audience can look through the eyepieces to see the two-part piece as one. Isolation Tank is a video projection that at first seems to be a looped video of the choppy ocean surface until it zooms in, going under the water’s surface, and back out again. In his work, Hill disrupts notions of chronology and sequence, as well as how the eye perceives images, to produce an audiovisual entity that feels new amidst an otherwise increasingly uniform visual culture. The show, like the drug, calls attention to the sensory faculties of the viewer.

This entry was posted on Wednesday, April 20th, 2011 at 4:24 pm and is filed under AO On Site. You can follow any responses to this entry through the RSS 2.0 feed. You can leave a response, or trackback from your own site.