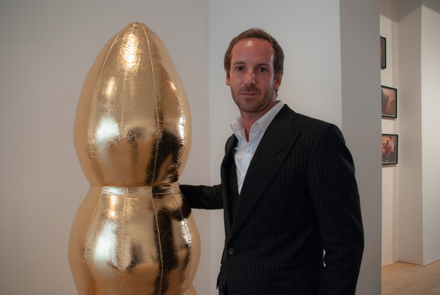 Art Observed was on site at the opening of Paul McCarthy “Selected Works” at the Charles Riva Collection Thursday, April 28th. The show’s opening fell on the inaugural night of Art Brussels 2011, which ArtInfo calls a “slow burn” – in an interview with Perry Rubenstein, the gallerist compared the show to Art Basel Miami Beach: “The collectors that attend [Art Brussels] are true connoisseurs — they look at work many times and engaged in informed dialogue before acquiring.” The same thoughtful collecting can be seen in Mr. Riva’s selection of 30 of McCarthy’s most seminal works.

Paul McCarthy is a multimedia artist, who is known for his sexually-tinged transgressive work. He fires satirical shots at beloved American icons and myths– of Hollywood, of Manifest Destiny, of Democracy itself. 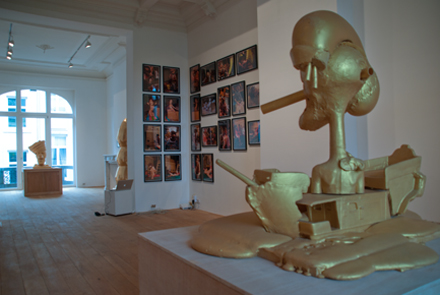 More text, images, and an interview with gallerist Charles Riva after the jump… 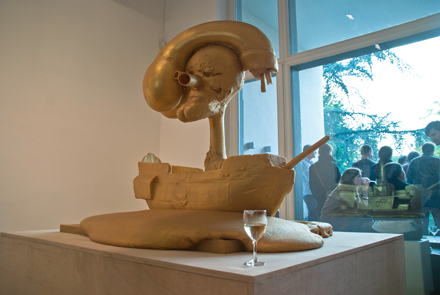 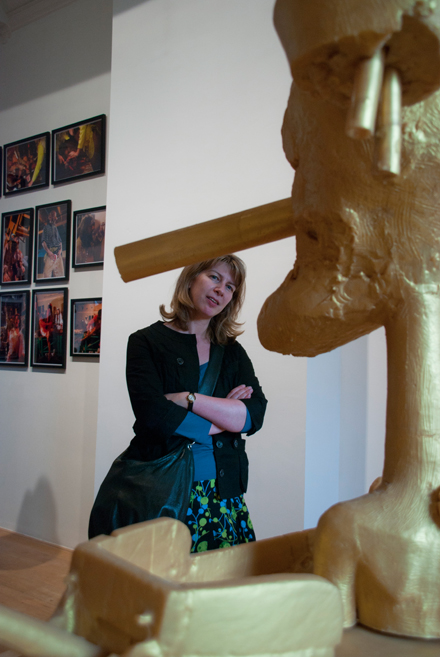 McCarthy was born in Salt Lake City, Utah in 1945. He received his artistic training at the University of Utah, Salt Lake City; the San Francisco Art Institute, and USC Los Angeles, where he later taught. Recent exhibitions include CCA Wattis Institute for Contemporary Arts in San Francisco, the Whitney Museum of American Art, the Stedelijk Museum in Ghent, Moderna Museet in Stockholm, and Haus der Kunst in Munich (2005). McCarthy has also exhibited in the Berlin Biennial, Whitney Biennial, and the Venice Biennale for many years. Paul McCarthy lives and works in Los Angeles. 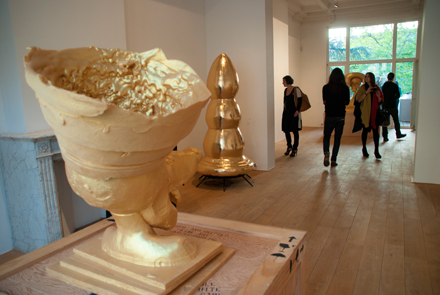 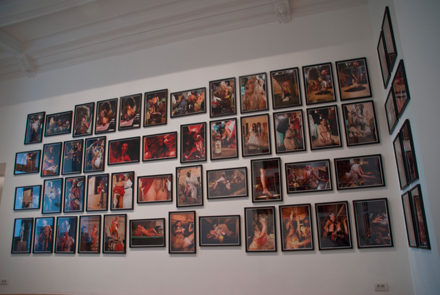 Art Observed caught up with gallerist Charles Riva at the opening:
(translated from French)

AO: Where did you first encounter McCarthy, and what drew you to his work?

CR: I believe I discovered Paul McCarthy’s works at the New Museum ten years ago. I remember the Heidi video, and I think there was Captain Dick Eye on display too.

AO: What interests you about Paul McCarthy?

CR: Because it is a bit like a fairy tale for adults. He put Walt Disney on edge with Pinocchio, Heidi, and Captain Dick Head, which refers to the Pirates of Caribbean. He worked those characters in a very materialistic way, and transformed them as objects, making us really want to own them. With the Pinocchio sculpture exhibited downstairs, he takes the eyes off, pulls his nose out and moves it instead of Pinocchio’s mouth. This emphasizes a castrating behavior which looks a bit like butchery.

AO: McCarthy’s work is largely about transgression, about being a provocateur. Do you think the controversial nature of his work prevented him from being recognized by major museums and galleries in the US until the 1990s?

CR: In a way, yes. The artist began with performances and video installations which were very difficult to look at. In the show, you can see 79 photographs from Pirate Party, a work co-realised with his son. Paul McCarthy deals with politics with the Gold Butter Dog– he pushes the boundaries so far that we finally laugh at the subject involved. Two other characters, Osama bin Laden and George W. Bush, [appeared in] work created for the Hauser & Wirth show in 2003- the artist turned the Guggenheim Museum upside-down to look like Osama bin Laden’s hat. So he strongly attacks politic in using metaphoric approaches.

AO: McCarthy’s humor is quite based in American culture, in the parody of Hollywood, and in exposing the dark side of the American dream. Do you think Belgians are sympathetic with McCarthy’s dark humor?

CR: I believe so! In the United States, Paul McCarthy has never had any museum retrospectives. He worked on controversial pieces involving George W. Bush so he had some issues exhibiting the work in American institutions. Moreover, there may still be a comparative puritanical element to the U.S. which doesn’t help in exhibiting this kind of work.

AO: Much of McCarthy’s work explores the human obsession with power and domination. Are there certain pieces in this exhibition that seem to speak more towards this motif?

CR: Not really, they all are very strong with their own personal stories. Every sculpture has its explanation and own reason, indeed, they introduce you to a fantasy world for reserved for adults. In fact, there is Heidi and Pinocchio. Heidi is the first piece I bought. He wants to demonstrate the dark side behind the smiling girl living in the mountain with her grandfather. You never saw what happens behind the fairytale. There is a “double interpretation.”It is very paradoxical, that’s why a lot of people don’t want to deal with his work.

The Paul McCarthy pieces I own are almost all within the show. I wanted to keep one work upstairs– I thought it was too much to be exhibited downstairs. Also, I am still not sure about the Transgum, as it might not be strong enough to be part of the show. But I really like this piece. The show is a real chewing gum, so to speak, that you can eat– it was edited at 30 pieces.

AO: Art Observed has covered some of McCarthy’s recent exhibitions, Three Sculptures at L&M Arts in Los Angeles, and Pig Island at Palazzo Citterio/ Fondazione Nicola Trussardi in Milan, and White Snow at Hauser & Wirth in New York. Have you seen any of these, and what were your impressions?

CR: I saw all the shows. I really loved the New York one where he made a lots of White Snow drawings; a lot of collectors were interested. Pig Island is a great show, very important as far as Paul McCarthy artworks. But it something that you could not collect. It is a sort of fantasy land/mountain- the installation is managed by 10 people and I can’t imagine how it would be disassembled. It is idea of showing something exceptional but unbuyable.

AO: What is your next acquisition?

CR: My dream is Captain Dick Eye. He is exceptional. It’s a piece with a cock instead of an eye. 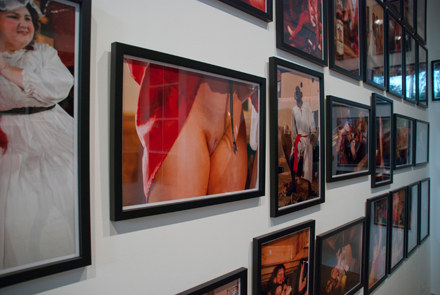 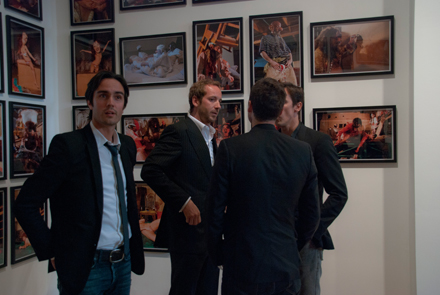 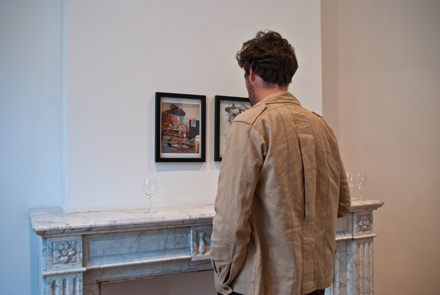 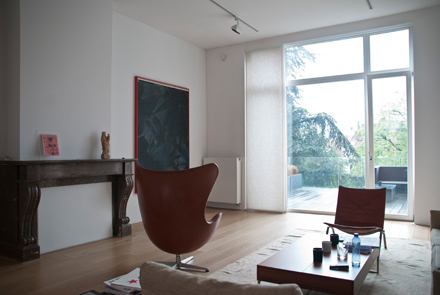 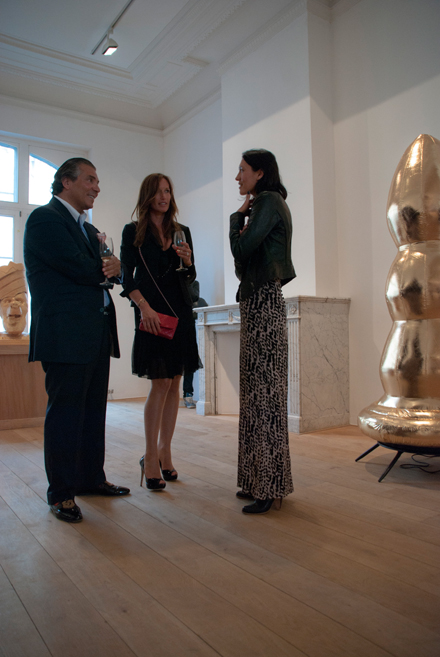 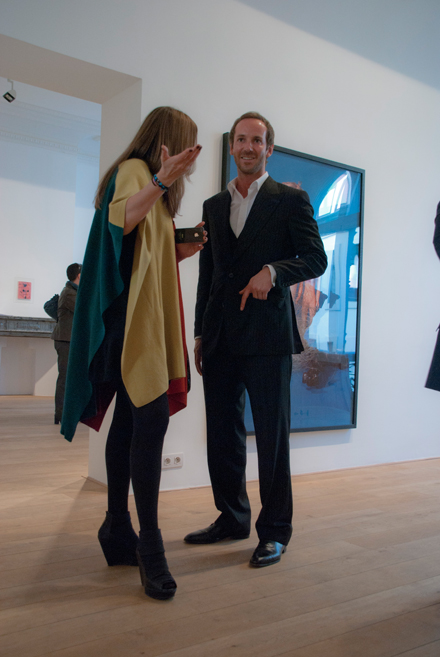 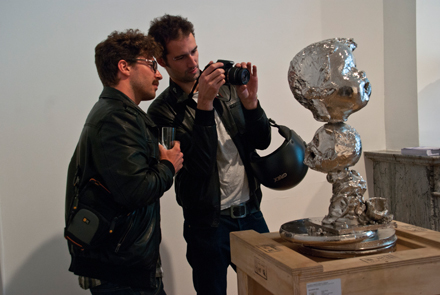 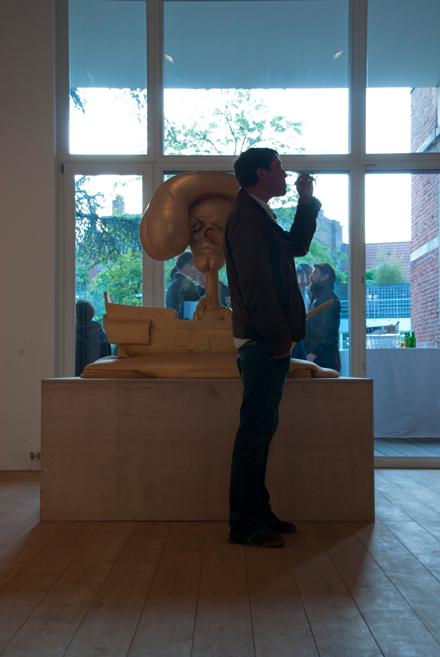 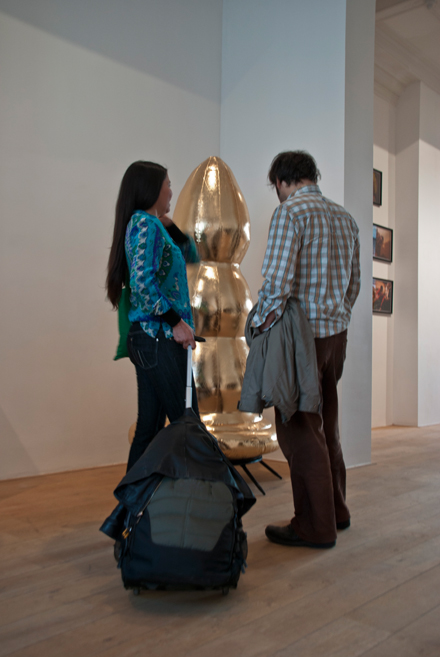 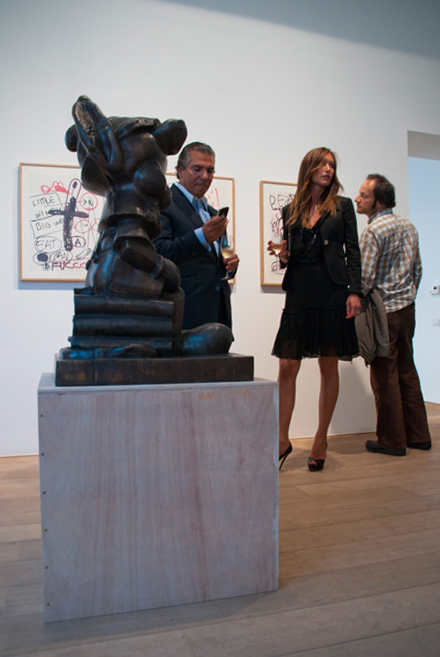 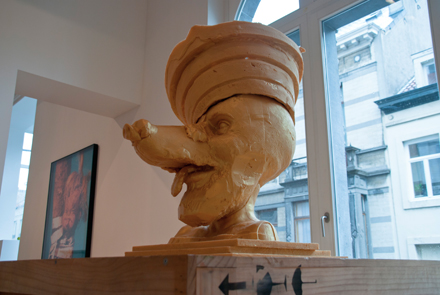 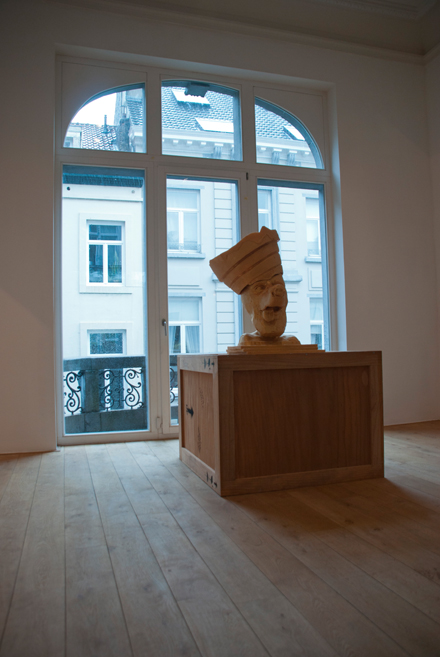 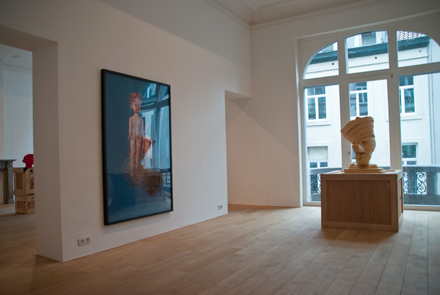 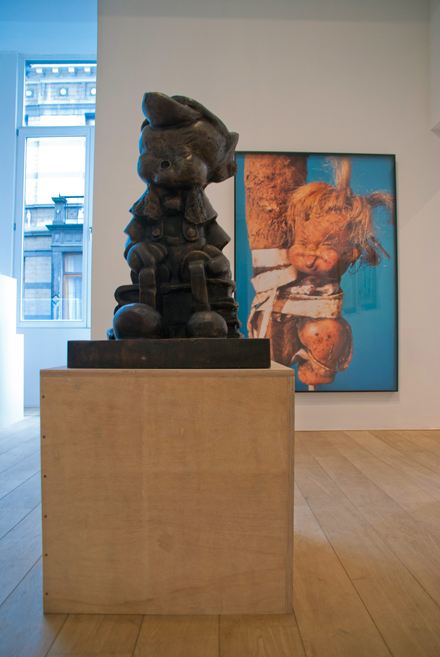 Pincocchio (Bronze) and Propo Objects: Baby on a Snake (1992) 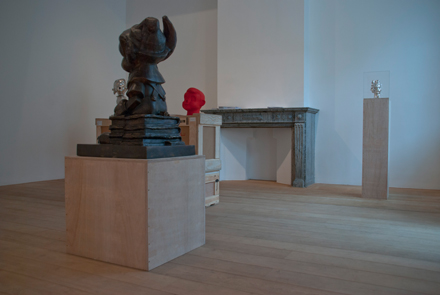 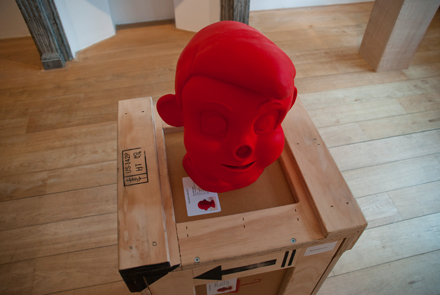 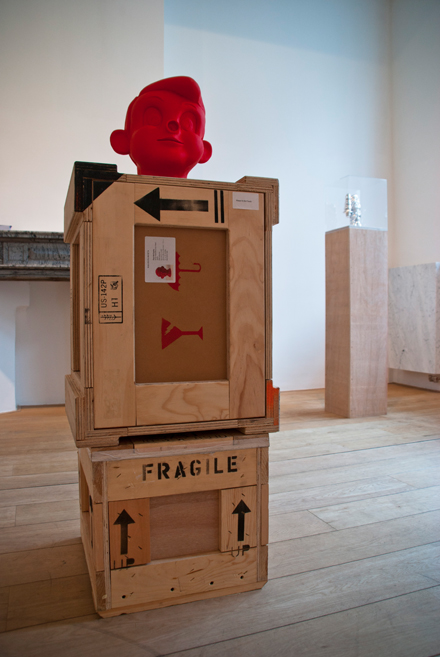 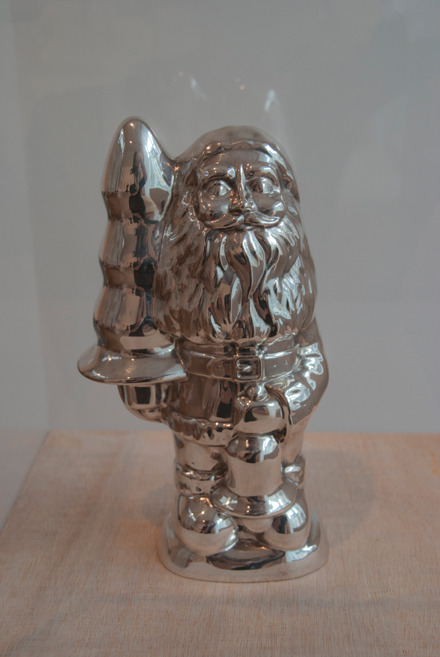 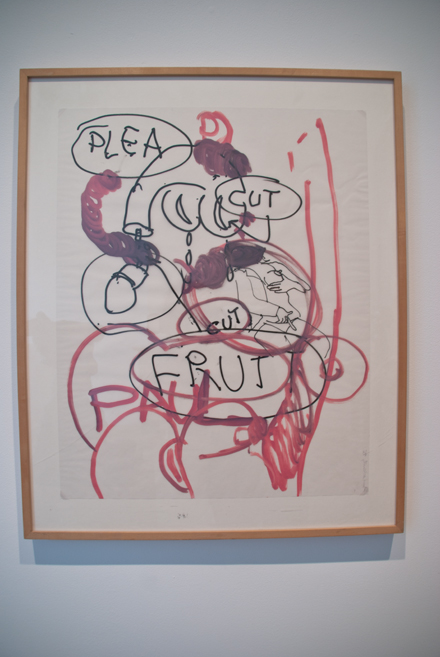 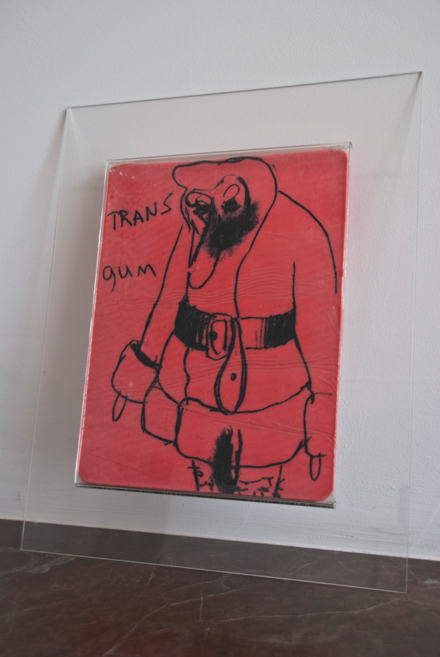 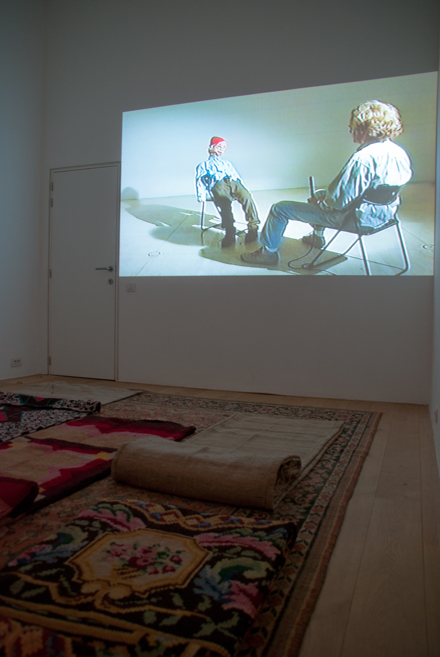 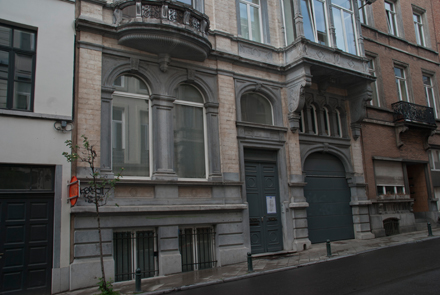 This entry was posted on Tuesday, May 3rd, 2011 at 8:10 pm and is filed under AO On Site. You can follow any responses to this entry through the RSS 2.0 feed. You can leave a response, or trackback from your own site.

One Response to “AO On Site – Brussels: Opening of Paul McCarthy “Selected Works” at Charles Riva Collection, through October 2, 2011 with interview with gallerist Charles Riva”