Don’t Miss – London: Wim Wenders and Eve Sussman at Haunch of Venison through May 14th, 2011 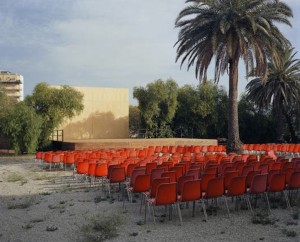 Currently on view at Haunch of Venison London are two solo exhibitions, Wim Wenders and Eve Sussman, artists who work in a variety of media and cannot be pigeon-holed as either photographers, filmmakers or video artists. On their own, these dueling solo exhibitions would be worth a visit but together they are enhanced in their coexistence. Wim Wenders, a German director known for such films as Paris Texas (1984), The Wings of Desire (1987), and Buena Vista Social Club (1999) shows a series of photographs depicting landscapes and cityscapes, for the most part completely devoid of human subjects, and Eve Sussman is showing her photographs alongside one of her video projects.

Wenders’ photographs achieve a very cinematic effect; many resemble movie sets, long abandoned.  In “Open Air Screen” hundreds of orange chairs are arranged in rows facing an equally vacant stage. Amazingly, without the use of protagonists in his images, Wenders still is able to capture the feeling that these spaces were either just occupied or are anxiously awaiting their characters, a motif repeated in “The Street Corner Butte, Montana.” 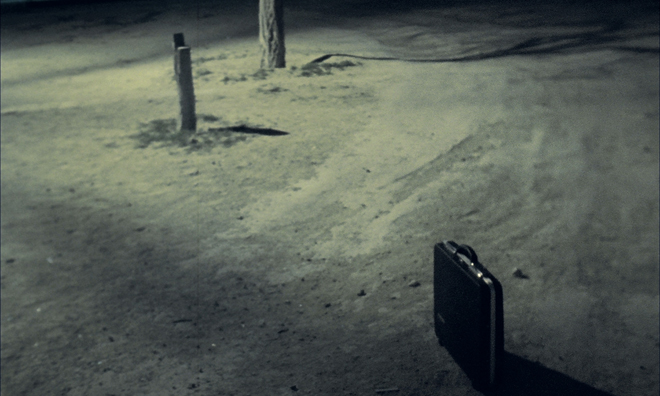 Acting as the central work for Eve Sussman’s solo exhibition, “whiteonwhite:algorithmicnoir” is a film created with collaborators Rufus Corporation, along with a series of photographs. Images of lone figures or void landscapes are displayed on repeat. It is interesting to note that Sussman takes issue with her label as a video artist and in fact has said, “All of the characteristics of what I’m doing seem like they fall more easily into the concerns that surround filmmaking as opposed to what you would think of as video art. It gets very blurry. That blurriness is really interesting to me and that’s why I’m trying to bridge the gap—trying to have a foot in both worlds.” The tenets of filmmaking she wishes to appropriate for video art include plot-lines as well as emotional involvement, providing in essence those aspects of film that culminate in entertainment.

The exhibitions can in no way be denigrated to cinema-therapy, though filmmaking is the common denominator. Whether photograph, video art or film, all of the works on view are striking, a quiet coup for interdisciplinary art.

This entry was posted on Tuesday, May 10th, 2011 at 3:00 am and is filed under Art News. You can follow any responses to this entry through the RSS 2.0 feed. You can leave a response, or trackback from your own site.