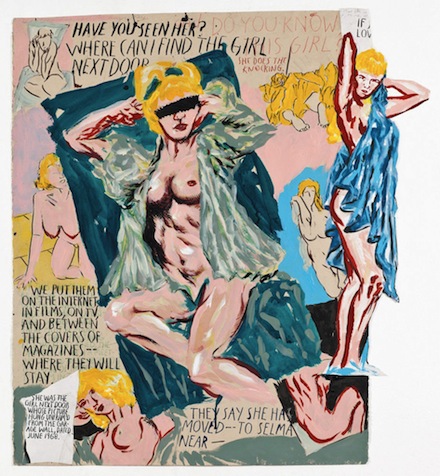 American artist Raymond Pettibon and German artist Anselm Reyle opened Contemporary Fine Art’s exhibition in this year’s Gallery Weekend Berlin.  Pettibon’s show is titled “Looker-Upper”, and is composed of more than eighty new drawings, portraying themes from sports, sex, and popular culture.  Reyle’s show is titled “Little Cody”, and is made up of several painting/compositions, three foil-neon pieces, and collection of sofas.  Pettibon’s show takes up the ground floor of CFA, while Reyle’s show takes up the second.

Pettibon is known for his comic-like drawings that are made of ink and usually involve crayons, watercolor, gouache, and acrylic.  Pettibon’s pieces are arranged on the walls in groups of about 20, with no discernable pattern.  Some of the pictures have captions, while others not.  Many of the drawings are of events involving baseball players, like “No Title (Of the Batters)” – pictured.  Others concern sexual or political themes.  Combined the paintings offer a comical montage that the viewer can read through. 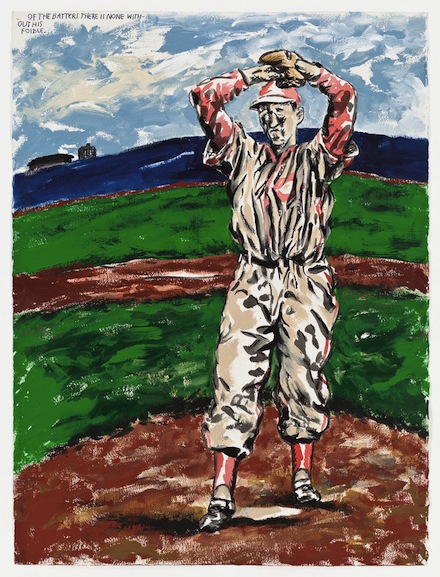 Reyle showcases work in various mediums, but the focuses on paintings, which imitate the recognizable children’s paint-by-numbers game, a motif of Reyle’s less known than his ‘foil-paintings’ or more abstract pieces.  In the paint-by-numbers works, the black lines of the painting delineate the form that underlies the picture, such as in “Little Cody” (pictured), where the underlying form of a dog is barely recognizable through the clashing colors and patterns. As is characteristic of Reyle’s tongue-in-cheek approach, some of the areas that would normally be filled in still reveal their “paint-by” numbers.  In those spaces, Reyle has used different methods of paint application than continues throughout the rest of the piece. The artist has also produced some abstract paint-by-numbers paintings which are enlarged sections the figurative works.  In both cases, Reyle adds his signature, a splotch with some runny drops of paint. 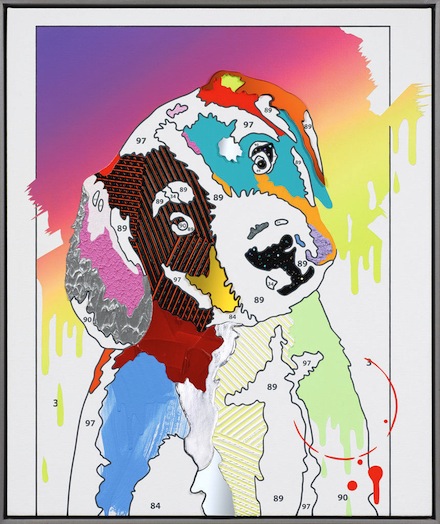 The show also presents three foil-neon pieces, with Reyle’s familiar use of rippled foil, and sofas (of which there are five), which have been produced as an engagement with the Italian design group Memphis.  The sofas are made from an agglomeration of garish fabrics, and are set on pedestals. 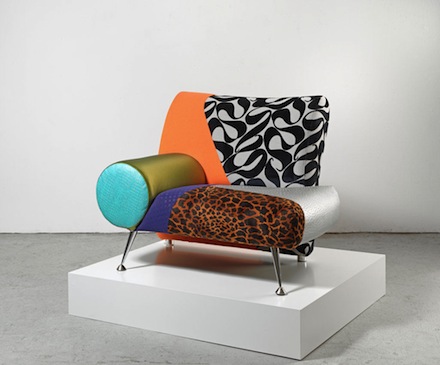 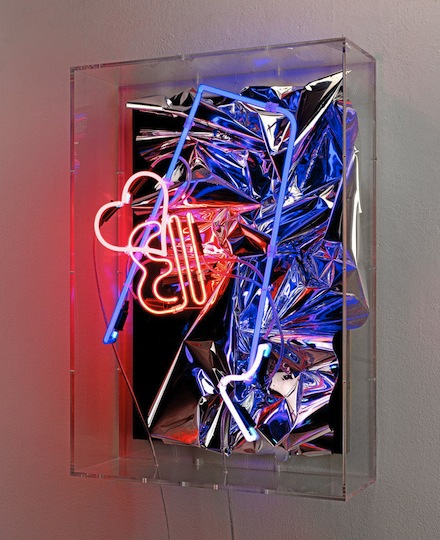 This is Reyle’s second show with CFA, and Pettibon’s fourth.  Given its location in Berlin’s Mitte district, near Museum Island, CFA attracts large crowds, and this exhibition is no different.  Clusters of people build up as one tries to read the captions in Pettibon’s work, while the glowing colors of some of Reyle’s work almost hold one in place.  Combined, Pettibon’s and Reyle’s work create a comical commentary on themes from life, including sports, sex, and the art world itself.  Both shows can be seen until the 11th of June, 2011.

This entry was posted on Sunday, May 22nd, 2011 at 12:52 am and is filed under Galleries, Go See. You can follow any responses to this entry through the RSS 2.0 feed. You can leave a response, or trackback from your own site.